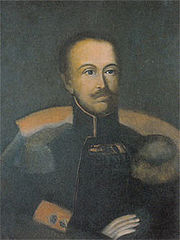 Pavel Aleksandrovich Katenin , (22 December 1792 — 4 June 1853), was a belated Russia
Russia
Russia or , officially known as both Russia and the Russian Federation , is a country in northern Eurasia. It is a federal semi-presidential republic, comprising 83 federal subjects...
n classicist poet
Poet
A poet is a person who writes poetry. A poet's work can be literal, meaning that his work is derived from a specific event, or metaphorical, meaning that his work can take on many meanings and forms. Poets have existed since antiquity, in nearly all languages, and have produced works that vary...
, dramatist, and literary critic who also contributed to the evolution of Russian Romanticism
Romanticism
Romanticism was an artistic, literary and intellectual movement that originated in the second half of the 18th century in Europe, and gained strength in reaction to the Industrial Revolution...
.

Katenin took part in the Patriotic War of 1812 and was one of the leaders of the Military Society, which preceded the Decembrists. In 1820, his freethinking attitudes led to his being dismissed from the army. Two years later, Count Miloradovich
Mikhail Andreyevich Miloradovich
Mikhail Andreyevich Miloradovich , spelled Miloradovitch in contemporary English sources was a Russian general prominent during the Napoleonic Wars. He entered military service on the eve of the Russo-Swedish War of 1788–1790 and his career advanced rapidly during the reign of Paul I...
, Governor of St. Petersburg, had him deported from the capital for having booed his own favourite actress.

Katenin was an avid theatre-goer who spurned Shakespeare as vulgar and obscure and admired Corneille
Pierre Corneille
Pierre Corneille was a French tragedian who was one of the three great seventeenth-century French dramatists, along with Molière and Racine...
and Racine
Jean Racine
Jean Racine , baptismal name Jean-Baptiste Racine , was a French dramatist, one of the "Big Three" of 17th-century France , and one of the most important literary figures in the Western tradition...
for their noble diction and clarity. His enthusiasm for Neoclassical
Neoclassicism
Neoclassicism is the name given to Western movements in the decorative and visual arts, literature, theatre, music, and architecture that draw inspiration from the "classical" art and culture of Ancient Greece or Ancient Rome...
theatre induced him to translate a number of French tragedies for the Russian stage. He also wrote Andromache (1809-19), the last "regular" Russian tragedy. The actor and playwright Vasily Karatygin
Vasily Karatygin
Vasily Andreevich Karatygin was a leading actor of Russian Romanticism, sometimes styled the Russian Kean.Karatygin joined the Bolshoi Theatre in St Petersburg in 1820 and moved to the Alexandrine Theatre in 1832...
was considered his disciple.

Katenin's principal contention was that poetry should be national, and it was this which led him away from the Karamzinians and Zhukovsky
Vasily Zhukovsky
Vasily Andreyevich Zhukovsky was the foremost Russian poet of the 1810s and a leading figure in Russian literature in the first half of the 19th century...
ites. Disappointed by Zhukovsky's mellifluent translation of Bürger
Gottfried August Bürger
Gottfried August Bürger was a German poet. His ballads were very popular in Germany. His most noted ballad, Lenore, found an audience beyond readers of the German language in an English adaptation and a French translation.-Biography:He was born in Molmerswende , Principality of Halberstadt, where...
's Lenore
Lenore (ballad)
Lenore, sometimes translated as Leonora, Leonore or Ellenore, is a poem written by German author Gottfried August Bürger in 1773, and published in 1774 in the Göttinger Musenalmanach...
, Katenin brought out his own version of the ballad, whose title was Russified as Olga (1816). In this poem he tried to attain nationality by the use of aggressive (and at that time objectionable) realism
Literary realism
Literary realism most often refers to the trend, beginning with certain works of nineteenth-century French literature and extending to late-nineteenth- and early-twentieth-century authors in various countries, towards depictions of contemporary life and society "as they were." In the spirit of...
in diction and detail. He instigated a dispute over the proper method of translating ottava rima
Ottava rima
Ottava rima is a rhyming stanza form of Italian origin. Originally used for long poems on heroic themes, it later came to be popular in the writing of mock-heroic works. Its earliest known use is in the writings of Giovanni Boccaccio....
, a dispute which resulted in Pushkin's poem The Little House in Kolomna.

Katenin's early ballads had an appreciable influence on the Russian ballads of Pushkin, who esteemed Katenin highly and was almost alone in doing justice to his poetry. In his later work Katenin became excessively archaic, finally breaking away from the taste of the day. In all he did he was a genuine master of technique but he lacked the creative fire that alone infects and attracts. After 1832 he abandoned literature and lived in the seclusion of his estate near Kologriv
Kologriv
Kologriv is a town and the administrative center of Kologrivsky District of Kostroma Oblast, Russia, located on the left bank of the Unzha River northeast of Kostroma. Population:...
, a profoundly embittered and dissatisfied man.
The source of this article is wikipedia, the free encyclopedia.  The text of this article is licensed under the GFDL.