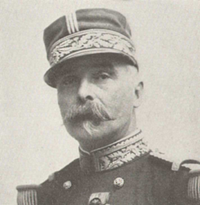 When war broke out in 1914 French commander in chief General Joseph Joffre
Joseph Joffre
Joseph Jacques Césaire Joffre OM was a French general during World War I. He is most known for regrouping the retreating allied armies to defeat the Germans at the strategically decisive First Battle of the Marne in 1914. His popularity led to his nickname Papa Joffre.-Biography:Joffre was born in...
recalled General Pau from retirement to command the "Army of Alsace" to participate in attacks called for by the doomed French Plan XVII
Plan XVII
Plan XVII was the name of a "scheme of mobilization and concentration" that was adopted by the French General Staff in 1913, to be put into effect by the French Army in the event of war between France and Germany but was not ‘a prescribed narrative for the campaign’ or battle...
. Although initially successful, Pau was defeated at Morhange-Sarrebourg and when it was clear to Joffre that French hopes for a quick victory in Alsace had faded and that France now faced the real possibility of quick defeat, Pau's army was broken up and sent north to join the Sixth Army in time to participate in the First Battle of the Marne
First Battle of the Marne
The Battle of the Marne was a First World War battle fought between 5 and 12 September 1914. It resulted in an Allied victory against the German Army under Chief of Staff Helmuth von Moltke the Younger. The battle effectively ended the month long German offensive that opened the war and had...
.

General Pau's command barely lasted 2 months. After that he was sent as French representative to the Russian Stavka
Stavka
Stavka was the term used to refer to a command element of the armed forces from the time of the Kievan Rus′, more formally during the history of Imperial Russia as administrative staff and General Headquarters during late 19th Century Imperial Russian armed forces and those of the Soviet Union...
. Pau also toured Australia in Sept 1918, meeting Australian Veterans, and War rallies. he was In Toowoomba Qld, Sept 28th 1918.
The source of this article is wikipedia, the free encyclopedia.  The text of this article is licensed under the GFDL.