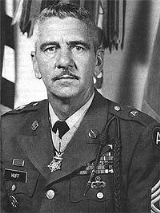 Huff joined the Army from his birth city of Cleveland, Tennessee
Cleveland, Tennessee
Cleveland is a city in Bradley County, Tennessee, United States. The population was 41,285 at the 2010 census. It is the county seat of Bradley County...
, and by February 8, 1944 was serving as a Corporal in the 509th Parachute Infantry Battalion. On that day, near Carano
Carano
Carano is a comune in Trentino in the northern Italian region Trentino-Alto Adige/Südtirol, located about 35 km northeast of Trento. As of 31 December 2004, it had a population of 958 and an area of 13.6 km²....
, Italy
Italy
Italy , officially the Italian Republic languages]] under the European Charter for Regional or Minority Languages. In each of these, Italy's official name is as follows:;;;;;;;;), is a unitary parliamentary republic in South-Central Europe. To the north it borders France, Switzerland, Austria and...
, Huff led a reconnaissance
Reconnaissance
Reconnaissance is the military term for exploring beyond the area occupied by friendly forces to gain information about enemy forces or features of the environment....
patrol while under heavy fire from German
Germany
Germany , officially the Federal Republic of Germany , is a federal parliamentary republic in Europe. The country consists of 16 states while the capital and largest city is Berlin. Germany covers an area of 357,021 km2 and has a largely temperate seasonal climate...
forces. For his actions during the patrol, Huff was issued the Medal of Honor three months later, on May 26, 1944.


For conspicuous gallantry and intrepidity at risk of life above and beyond the call of duty, in action on 8 February 1944, near Carano, Italy. Cpl. Huff volunteered to lead a 6-man patrol with the mission of determining the location and strength of an enemy unit which was delivering fire on the exposed right flank of his company. The terrain over which he had to travel consisted of exposed, rolling ground, affording the enemy excellent visibility. As the patrol advanced, its members were subjected to small arms and machinegun fire and a concentration of mortar
Mortar (weapon)
A mortar is an indirect fire weapon that fires explosive projectiles known as bombs at low velocities, short ranges, and high-arcing ballistic trajectories. It is typically muzzle-loading and has a barrel length less than 15 times its caliber....
fire, shells bursting within 5 to 10 yards of them and bullets striking the ground at their feet. Moving ahead of his patrol, Cpl. Huff drew fire from 3 enemy machineguns and a 20mm
20 mm caliber
The 20 mm caliber is a specific size of cannon or autocannon ammunition, commonly the smallest caliber which is unambiguously a cannon and not a heavy machine gun....
. weapon. Realizing the danger confronting his patrol, he advanced alone under deadly fire through a minefield
Land mine
A land mine is usually a weight-triggered explosive device which is intended to damage a target—either human or inanimate—by means of a blast and/or fragment impact....
and arrived at a point within 75 yards of the nearest machinegun position. Under direct fire from the rear machinegun, he crawled the remaining 75 yards to the closest emplacement, killed the crew with his submachine gun
Submachine gun
A submachine gun is an automatic carbine, designed to fire pistol cartridges. It combines the automatic fire of a machine gun with the cartridge of a pistol. The submachine gun was invented during World War I , but the apex of its use was during World War II when millions of the weapon type were...
and destroyed the gun. During this act he fired from a kneeling position which drew fire from other positions, enabling him to estimate correctly the strength and location of the enemy. Still under concentrated fire, he returned to his patrol and led his men to safety. As a result of the information he gained, a patrol in strength sent out that afternoon, 1 group under the leadership of Cpl. Huff, succeeded in routing an enemy company of 125 men, killing 27 Germans and capturing 21 others, with a loss of only 3 patrol members. Cpl. Huff's intrepid leadership and daring combat skill reflect the finest traditions of the American infantryman.

Paul Huff died at age 76 and was buried in Hillcrest Memorial Gardens in his hometown of Cleveland, Tennessee. He was survived by his wife, Betty Cunnyngham Huff.

Sgt. Paul Huff Parkway, a major thoroughfare in Cleveland, Tennessee, is named in his honor.