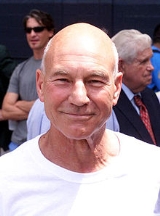 Overview
Sir Patrick Hewes Stewart, OBE
Order of the British Empire
The Most Excellent Order of the British Empire is an order of chivalry established on 4 June 1917 by George V of the United Kingdom. The Order comprises five classes in civil and military divisions...
(born 13 July 1940) is an English film, television and stage actor, who has had a distinguished career in theatre and television for around half a century. He is most widely known for his television and film roles, such as Captain Jean-Luc Picard
Jean-Luc Picard
Captain Jean-Luc Picard is a Star Trek character portrayed by Patrick Stewart. He appears in the television series Star Trek: The Next Generation and the feature films Star Trek Generations, Star Trek: First Contact, Star Trek: Insurrection, and Star Trek Nemesis...
in Star Trek: The Next Generation
Star Trek: The Next Generation
Star Trek: The Next Generation is an American science fiction television series created by Gene Roddenberry as part of the Star Trek franchise. Roddenberry, Rick Berman, and Michael Piller served as executive producers at different times throughout the production...
and its successor films, Professor Charles Xavier
Professor X
Professor Charles Francis Xavier, also known as Professor X, is a fictional character, a Marvel Comics superhero known as the leader and founder of the X-Men....
in the X-Men film series
X-Men (film series)
The X-Men film series consists of superhero films based on the Marvel Comics superhero team of the same name. The films star an ensemble cast, focusing on Hugh Jackman as Wolverine, who is drawn into the conflict between Professor Xavier and Magneto , who have opposing views on humanity's...
, and as the voice of Avery Bullock in American Dad!
American Dad!
American Dad! is an American animated television series created by Seth MacFarlane and owned by Underdog Productions and Fuzzy Door Productions. It is produced in association with 20th Century Fox Television...
.
Stewart was born on 13 July 1940 in Mirfield
Mirfield
Mirfield is a small town and civil parish within the Metropolitan Borough of Kirklees, in West Yorkshire, England. It is located on the A644 road between Brighouse and Dewsbury...
, in the West Riding of Yorkshire
West Riding of Yorkshire
The West Riding of Yorkshire is one of the three historic subdivisions of Yorkshire, England. From 1889 to 1974 the administrative county, County of York, West Riding , was based closely on the historic boundaries...
, England.