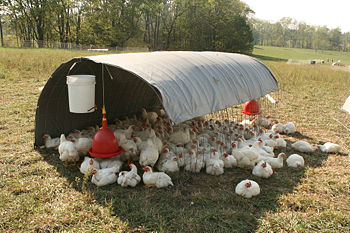 Pastured poultry is a sustainable agriculture
Sustainable agriculture
Sustainable agriculture is the practice of farming using principles of ecology, the study of relationships between organisms and their environment...
technique that calls for the raising of laying chickens, meat chickens (broilers), and/or turkeys on pasture
Pasture
Pasture is land used for grazing. Pasture lands in the narrow sense are enclosed tracts of farmland, grazed by domesticated livestock, such as horses, cattle, sheep or swine. The vegetation of tended pasture, forage, consists mainly of grasses, with an interspersion of legumes and other forbs...
, as opposed to indoor confinement. Humane treatment, the perceived health benefits of pastured poultry, in addition to superior texture and flavor, are causing an increase in demand for such products.

Joel Salatin
Joel Salatin
Joel F. Salatin is an American farmer, lecturer, and author whose books include You Can Farm and Salad Bar Beef.Salatin raises livestock using holistic methods of animal husbandry, free of potentially harmful chemicals, on his Polyface Farm in Swoope, Virginia, in the Shenandoah Valley...
of Swoope, Virginia, helped to reintroduce the technique at Polyface Farm
Polyface Farm
Polyface Farm is a farm located in rural Swoope, Virginia, United States, run by Joel Salatin and his family. The farm is driven using unconventional methods with the goal of "emotionally, economically and environmentally enhancing agriculture". This farm is where Salatin developed and put into...
, and wrote his book Pastured Poultry Profits to spread the idea to other farmers. Andy Lee and Herman Beck-Chenowith expanded on Salatin's techniques, and created some of their own.

The pens that house the fowl can be made from wood and scrap metal or out of PVC pipe and white tarps.

Pastured poultry is also gaining popularity because it helps the farmer, through reducing capital costs
Capital (economics)
In economics, capital, capital goods, or real capital refers to already-produced durable goods used in production of goods or services. The capital goods are not significantly consumed, though they may depreciate in the production process...
, and increasing pasture fertility. It is very well suited for incorporation within a system of managed intensive grazing
Managed intensive grazing
Management Intensive Rotational Grazing is a system of grazing in which ruminant and non-ruminant herds are regularly and systematically moved to fresh pasture with the intent to maximize the quality and quantity of forage growth. MIRG can be used with cattle, sheep, goats, pigs, chickens, ducks...
.

Pastured Poultry is not limited to chickens and turkeys. It includes a variety of other birds, including ducks, geese and exotics in the poultry family. 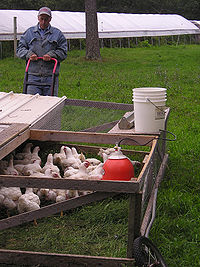 Herman Beck-Chenoweth re-introduced the free-range system that was the most popular way to raise poultry in the U.S. from the 1930s through the 1960s. The system allows birds to range freely during the day and be safely sequestered on secure skid houses over night. The addition of a guard animal, such as an Komondor
Komondor
The Komondor is a large, white-colored Hungarian breed of livestock guardian dog with a long, corded coat....
or Anotolian Shepperd dog, controls predators. In the Modern American Free-Range Poultry Production System birds are much less crowded and freer to practice normal bird behaviour than in any other pasture based system.

Although frequently listed as a "pasture" method, free-"range" refers to the length of the forage. Cows graze "pasture" which is forage over six inches long. "Range" refers to short forage of 2-4 inches. Free-Range is a very sustainable production system that improves the farmer's soil and produces poultry with strong bones and meat with good "mouthfeel". Combined with proper aging after slaughter the meat is tender and flavorful.

More information on this system http://www.Free-RangePoultry.com.

As part of their pastured poultry process, some farmers use a mobile house that houses egg laying hens. This is called an eggmobile. Popularized by Joel Salatin, this model has been adapted across the United States. The concept is to allow chickens to move two to three days behind cows, which are rotationally grazing. The chickens scratch through cow manure, harvesting their own larvae and insects, spreading out manure and helping to reduce the fly population on the cows. The eggmobile contains nesting boxes that the hens use to lay eggs. The nesting boxes can be made of many materials, such as this design at Nature's Harmony Farm in Georgia which uses milk crates.

The foraging helps the hens to produce eggs with an "orangish" yolk and a thicker albumen. This is owed to the beta carotene that the grass provides to the eggs. A test done by Mother Earth News revealed that eggs laid by hens foraging on pasture have shown: