Encyclopedia
Paracuellos del Jarama is a small town in the urban area of Madrid, Spain
Madrid
Madrid is the capital and largest city of Spain. The population of the city is roughly 3.3 million and the entire population of the Madrid metropolitan area is calculated to be 6.271 million. It is the third largest city in the European Union, after London and Berlin, and its metropolitan...
. It is located Northeast from Madrid and very close to Barajas International Airport. 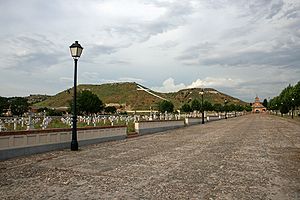 In November, 1936, Paracuellos del Jarama and nearby Torrejón de Ardoz
Torrejón de Ardoz
Torrejón de Ardoz is a town in the urban area of Madrid, Spain that has about 110,000 inhabitants.It is a town 20 km east of Madrid on the NII highway . It is essentially a dormitory town, mostly consisting of apartments. It can be reached by bus from Av...
were, along several days, the location of what is commonly known as the Paracuellos massacre
Paracuellos massacre
The Paracuellos massacre were a series of mass killings of suspected civilian and military supporters of the military coup led by Francisco Franco and his Nationalist Army during the Spanish Civil War by the Republicans. It took place during the Battle for Madrid during the early stages of the war...
, likely the biggest act of mass murder performed during the Spanish Civil War
Spanish Civil War
The Spanish Civil WarAlso known as The Crusade among Nationalists, the Fourth Carlist War among Carlists, and The Rebellion or Uprising among Republicans. was a major conflict fought in Spain from 17 July 1936 to 1 April 1939...
, when at least four thousand suspected right-wingers, both military and civilians, including many women, were shot and then buried in common graves by Spanish Republican soldiers and militiamen.