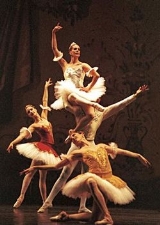 In 1847, Paquita was staged for the first time in Russia for the Imperial Ballet
Mariinsky Ballet
The Mariinsky Ballet is a classical ballet company based at the Mariinsky Theatre in Saint Petersburg, Russia. Founded in the 18th century and originally known as the Imperial Russian Ballet, the Mariinsky Ballet is one of the world's leading ballet companies...
of St. Petersburg by Marius Petipa
Marius Petipa
Victor Marius Alphonse Petipa was a French ballet dancer, teacher and choreographer. Petipa is considered to be the most influential ballet master and choreographer of ballet that has ever lived....
and Pierre-Frédéric Malevergne, being the first work ever staged by Petipa in Russia.

This wonderful ballet has got to be the VERY BEST of its genre and it is certainly my favorite piece! What I would like to know is if the Childrens' M...
More

In 1847, Paquita was staged for the first time in Russia for the Imperial Ballet
Mariinsky Ballet
The Mariinsky Ballet is a classical ballet company based at the Mariinsky Theatre in Saint Petersburg, Russia. Founded in the 18th century and originally known as the Imperial Russian Ballet, the Mariinsky Ballet is one of the world's leading ballet companies...
of St. Petersburg by Marius Petipa
Marius Petipa
Victor Marius Alphonse Petipa was a French ballet dancer, teacher and choreographer. Petipa is considered to be the most influential ballet master and choreographer of ballet that has ever lived....
and Pierre-Frédéric Malevergne, being the first work ever staged by Petipa in Russia. In 1881 Petipa produced a revival of the ballet for which he added new pieces specially composed by Ludwig Minkus
Ludwig Minkus
Ludwig Minkus a.k.a. Léon Fyodorovich Minkus was an Austrian composer of ballet music, a violin virtuoso and teacher.Minkus is most noted for the music he composed while serving as Ballet Composer of the St...
. This included the Pas de trois (a.k.a. the Minkus Pas de trois or Paquita Pas de trois) for the first act, and the Paquita Grand pas classique and the Mazurka des enfants (Children's mazurka) for the last act. Petipa's version of Paquita was retained in the repertory of the Mariinsky Theatre
Mariinsky Theatre
The Mariinsky Theatre is a historic theatre of opera and ballet in Saint Petersburg, Russia. Opened in 1860, it became the preeminent music theatre of late 19th century Russia, where many of the stage masterpieces of Tchaikovsky, Mussorgsky, and Rimsky-Korsakov received their premieres. The...
until 1926.

Marius Petipa's 1881 additions for Paquita survived long after the full-length ballet left the stage. Today these pieces, particularly the Pas Grand pas classique, are major cornerstones of the traditional classical ballet repertory, and have been staged by ballet companies throughout the world.

In 2001, the Ballet Master
Ballet Master
Ballet Master is the term used for an employee of a ballet company who is responsible for the level of competence of the dancers in their company...
Pierre Lacotte produced a revival of full-length, two act Paquita for the Paris Opera Ballet
Paris Opera Ballet
The Paris Opera Ballet is the oldest national ballet company in the world, and many European and international ballet companies can trace their origins to it...
. Although Lacotte re-choreographed most of the ballet himself, he restored Joseph Mazilier's original mime
Mime
The word mime is used to refer to a mime artist who uses a theatrical medium or performance art involving the acting out of a story through body motions without use of speech.Mime may also refer to:* Mime, an alternative word for lip sync...
sequences and mise-en-scène, as well as Marius Petipa's 1881 additions.

The plot takes place in Spain
Spain
Spain , officially the Kingdom of Spain languages]] under the European Charter for Regional or Minority Languages. In each of these, Spain's official name is as follows:;;;;;;), is a country and member state of the European Union located in southwestern Europe on the Iberian Peninsula...
during the occupation of Napoleon's army. The heroine is the young Gypsy girl, Paquita. Unbeknownst to Paquita, she is really of noble birth, having been abducted by Gypsies when she was an infant. She saves the life of a young French officer, Lucien d'Hervilly, who is the target of a Spanish governor who desires to have him killed by Iñigo, a gypsy chief. By way of a medallion she discovers that she is of noble birth, being in fact the cousin of Lucien. As such, she and the Officer are able to wed.

The Paquita Grand pas classique was revised in 1896 by Marius Petipa for a gala performance held at Peterhof
Peterhof Palace
The Peterhof Palace in Russian, so German is transliterated as "Петергoф" Petergof into Russian) for "Peter's Court") is actually a series of palaces and gardens located in Saint Petersburg, Russia, laid out on the orders of Peter the Great. These Palaces and gardens are sometimes referred as the...
in honor of Empress Catherine II. For the occasion the Imperial Ballet's newly appointed Prima ballerina assoluta
Prima ballerina assoluta
Prima ballerina assoluta is a rank or title given to notable female ballet dancers. To be recognised as a prima ballerina assoluta is a very rare honour, reserved only for the most exceptional soloists, usually those who have achieved international acclaim....
Mathilde Kschessinskaya invited several ballerinas to participate in the performance by interpolating their favorite classical variations
Variation (ballet)
Variation or Classical Variation in ballet is a solo dance. As with an Aria in opera, which allows the singer to demonstrate his or her interpretive skills, the variation in ballet has the same function...
(or solos) from different works. Thus, the tradition of including an entire suite of solos for various ballerinas began, a tradition which is still in place today.

Rudolf Nureyev
Rudolf Nureyev
Rudolf Khametovich Nureyev was a Russian dancer, considered one of the most celebrated ballet dancers of the 20th century. Nureyev's artistic skills explored expressive areas of the dance, providing a new role to the male ballet dancer who once served only as support to the women.In 1961 he...
staged the piece in 1964 for the Royal Academy of Dancing, and at La Scala
La Scala
La Scala , is a world renowned opera house in Milan, Italy. The theatre was inaugurated on 3 August 1778 and was originally known as the New Royal-Ducal Theatre at La Scala...
in 1970. Nureyev also staged it for the Vienna State Opera Ballet
Vienna State Opera
The Vienna State Opera is an opera house – and opera company – with a history dating back to the mid-19th century. It is located in the centre of Vienna, Austria. It was originally called the Vienna Court Opera . In 1920, with the replacement of the Habsburg Monarchy by the First Austrian...
and American Ballet Theatre
American Ballet Theatre
American Ballet Theatre , based in New York City, was one of the foremost ballet companies of the 20th century. It continues as a leading dance company in the world today...
in 1971. For all of his productions of the work Nureyev used John Lanchbery
John Lanchbery
John Arthur Lanchbery OBE was an English, later Australian, composer and conductor, famous for his ballet arrangements.-Life:...
's adaptation of the music. In 1984 Natalia Makarova
Natalia Makarova
Nataliya Romanovna Makarova is the legendary Soviet-Russian-born prima ballerina. The History of Dance, published in 1981, notes that “Her performances set standards of artistry and aristocracy of dance which mark her as the finest ballerina of her generation.” She has also won awards as an...
staged a new version of the Paquita Grand pas classique for American Ballet Theatre with music again arranged by Lanchbery. To date the company still retains Makarova's staging in their repertory, and many companies throughout the world have staged her version of the piece.

In 1974 the Ballet Master Nikita Dolgushin produced a staging of the Paquita Grand pas classique for the Maly Theatre Ballet of St. Petersburg. For his production Dolgushin called upon the former ballerina Elizaveta Gerdt
Elizaveta Gerdt
Elizaveta Pavlovna Gerdt was a Russian dancer and teacher whose career links the Russian imperial and Soviet schools of classical dance.A daughter of celebrated Paul Gerdt, she studied under Michel Fokine at the Imperial Ballet School, where her chief partner was Vaslav Nijinsky...
—who performed in Marius Petipa's original version of the piece— to assist in restoring the Paquita Grand pas classique to its form as performed during the early 20th century.

In 1978 the Kirov/Mariinsky Ballet's newly appointed artistic director Oleg Vinogradov staged a new version of the Paquita Grand pas classique for the company, a staging largely based on the version Pyotr Gusev
Pyotr Gusev
Pyotr Andreyevich Gusev was a ballet dancer, teacher and choreographer. He was born on 29. December, 1904 in St. Petersburg. He studied at the St. Petersburg School of Choreography under Alexandr Shiryayev. He was a friend of George Balanchine and joined his Young Ballet group. He graduated in...
staged for the Maly Theatre Ballet in 1952. The Kirov/Mariinsky Ballet still retain Vinogradov's version in their repertory, and many companies throughout the world include his version of the piece in their repertories.

The many different versions of the Paquita Grand pas classique are defined primarily by the various combinations of classical variations they contain. Here follows a list of the solos in place in the Kirov/Mariinsky Ballet's staging. The list below reveals who composed the piece, and in some cases what ballet they are taken from and/or for what dancer they were composed.

Solos from other stagings

Although most versions of the Paquita Grand pas classique contain the same classical variations as other stagings, some versions include solos that other versions do not. The list below reveals the origins of solos found in other stagings.