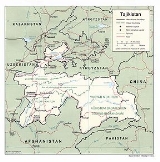 The Panj River also known as Pyandzh River or Piandj River (derived from its Russian name "Пяндж"), is a tributary
Tributary
A tributary or affluent is a stream or river that flows into a main stem river or a lake. A tributary does not flow directly into a sea or ocean...
of the Amu Darya
Amu Darya
The Amu Darya , also called Oxus and Amu River, is a major river in Central Asia. It is formed by the junction of the Vakhsh and Panj rivers...
. The river is 1,125 km long and forms a considerable part of the Afghanistan - Tajikistan
Tajikistan
Tajikistan , officially the Republic of Tajikistan , is a mountainous landlocked country in Central Asia. Afghanistan borders it to the south, Uzbekistan to the west, Kyrgyzstan to the north, and China to the east....
border.

The river is formed by the confluence of the Pamir River
Pamir River
The Pamir is a river in Tajikistan and Afghanistan. It is a tributary of the Panj River, and forms the northern boundary of Wakhan.The river has its sources in the Pamir Mountains in Gorno-Badakhshan province in the far eastern part of Tajikistan. It flows between the Wakhan Range and the Southern...
and the Wakhan River near the village of Qila-e Panja. From there, it flows westwards, forming the border of Afghanistan and Tajikistan. After passing the city of Khorog
Khorog
The town of Khorugh , also transliterated as Khoroq, Khorogh, Khorog, or Xoroq) is the capital of the Gorno-Badakhshan Autonomous Province in Tajikistan. It is also the capital of the Shughnon District of Gorno-Badakhshan. It has a population of 28,000...
, capital of the Gorno-Badakhshan Autonomous Region of Tajikistan
Tajikistan
Tajikistan , officially the Republic of Tajikistan , is a mountainous landlocked country in Central Asia. Afghanistan borders it to the south, Uzbekistan to the west, Kyrgyzstan to the north, and China to the east....
it receives water from one of its main tributaries, the Bartang River. It then turns towards the southwest, before joining the river Vakhsh
Vakhsh River
The Vakhsh has been intensively developed for human use. Electricity, aluminum, and cotton are the mainstays of Tajikistan’s economy, and the Vakhsh is involved with all three of these sectors. Hydroelectricity provides 91% of the country’s electricity as of 2005, and 90% of that total comes from...
and forming the greatest river of Central Asia
Central Asia
Central Asia is a core region of the Asian continent from the Caspian Sea in the west, China in the east, Afghanistan in the south, and Russia in the north...
, the Amudarya. Panj
Panj
Panj is a city in southern Tajikistan which is situated on the Afghan border, some south of the capital Dushanbe. It is located along the banks of the Panj River, from which it derives its name....
played a very important role during Soviet times, and was a strategic river during the Soviet military operations in Afghanistan in 1980's. 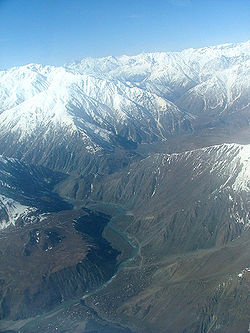 A water treaty between the Soviet Union
Soviet Union
The Soviet Union , officially the Union of Soviet Socialist Republics , was a constitutionally socialist state that existed in Eurasia between 1922 and 1991....
and Afghanistan, signed in 1946, allows Afghanistan to draw 9 million cubic metres of water a year.
It currently draws 2 million cubic metres of water. According to the Pyanj River Basin Project environmental damage could be expected if Afghanistan drew the entire amount of water from the river that the treaty allows.


The Aga Khan Development Network
Aga Khan Development Network
The Aga Khan Development Network is a group of private, non-denominational development agencies that seek to empower communities and individuals to improve living conditions and opportunities, in sub-Saharan Africa, Central and South Asia, and the Middle East...
has been engaged in a project to build a series of three bridges across the Panj River between Tajikistan
Tajikistan
Tajikistan , officially the Republic of Tajikistan , is a mountainous landlocked country in Central Asia. Afghanistan borders it to the south, Uzbekistan to the west, Kyrgyzstan to the north, and China to the east....
and Afghanistan
Afghanistan
Afghanistan , officially the Islamic Republic of Afghanistan, is a landlocked country located in the centre of Asia, forming South Asia, Central Asia and the Middle East. With a population of about 29 million, it has an area of , making it the 42nd most populous and 41st largest nation in the world...
.