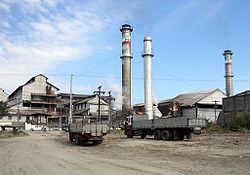 The Pampanga Sugar Development Company built the first Filipino-financed sugar central in Pampanga
Pampanga
Pampanga is a province of the Philippines located in the Central Luzon region. Its capital is the City of San Fernando, Pampanga. Pampanga is bordered by the provinces of Bataan and Zambales to the west, Tarlac and Nueva Ecija to the north, and Bulacan to the southeast...
, Philippines
Philippines
The Philippines , officially known as the Republic of the Philippines , is a country in Southeast Asia in the western Pacific Ocean. To its north across the Luzon Strait lies Taiwan. West across the South China Sea sits Vietnam...
. It was incorporated in April, 1918.

The Pasudeco Sugar Central was finished in March, 1921, to serve as a central purchasing and processing company for the surrounding sugar plantations. Financed by the Pampanga Sugar Development Company, it was constructed by the Honolulu Iron Works. Its existence became a catalyst for the exponential growth of San Fernando, the capital of the rich sugar-producing province of Pampanga.

On July 12, 1939, two of the founders, Jose de Leon and Augusto Gonzalez, as well as Constabulary Captain Julian Olivas, were gunned down at the administrative offices of Pasudeco. At that time, de Leon and Gonzalez were the two richest men in Pampanga and the biggest Pasudeco shareholder
Shareholder
A shareholder or stockholder is an individual or institution that legally owns one or more shares of stock in a public or private corporation. Shareholders own the stock, but not the corporation itself ....
s.
The source of this article is wikipedia, the free encyclopedia.  The text of this article is licensed under the GFDL.