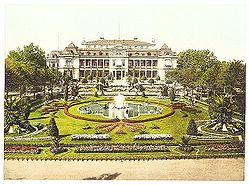 The Palmengarten is one of two botanical gardens in Frankfurt am Main
Frankfurt
Frankfurt am Main , commonly known simply as Frankfurt, is the largest city in the German state of Hesse and the fifth-largest city in Germany, with a 2010 population of 688,249. The urban area had an estimated population of 2,300,000 in 2010...
, Hesse
Hesse
Hesse or Hessia is both a cultural region of Germany and the name of an individual German state.* The cultural region of Hesse includes both the State of Hesse and the area known as Rhenish Hesse in the neighbouring Rhineland-Palatinate state...
, Germany
Germany
Germany , officially the Federal Republic of Germany , is a federal parliamentary republic in Europe. The country consists of 16 states while the capital and largest city is Berlin. Germany covers an area of 357,021 km2 and has a largely temperate seasonal climate...
, and is located in the city district Westend-Nord. It is the largest garden of its kind in Germany.

Like many Frankfurt public sites, it was privately financed and implemented by the architect Heinrich Siesmayer. Work was completed in 1871 and opened to the public. One colorful visit was from the American entertainer Buffalo Bill
Buffalo Bill
William Frederick "Buffalo Bill" Cody was a United States soldier, bison hunter and showman. He was born in the Iowa Territory , in LeClaire but lived several years in Canada before his family moved to the Kansas Territory. Buffalo Bill received the Medal of Honor in 1872 for service to the US...
who brought his Western show in 1890. In 1931, it was taken over by the city of Frankfurt but was later transferred to the American occupation authorities after World War II
World War II
World War II, or the Second World War , was a global conflict lasting from 1939 to 1945, involving most of the world's nations—including all of the great powers—eventually forming two opposing military alliances: the Allies and the Axis...
. When the Palmengarten was returned to the city's hands in the sixties, a major reconstruction effort was begun. Halls destroyed in the war were redeveloped and expanded. In 1992 the reconstruction finished completely and the Palmengarten shined in its new form.

Directly next to the area of the Palmengarten is the Frankfurt Botanical Garden, which belongs to the biology department of Johann Wolfgang Goethe-Universität Frankfurt.

The botanical exhibits are organized according to their origin in free-air or climatized greenhouses, which also contain numerous tropical and subtropical plants.