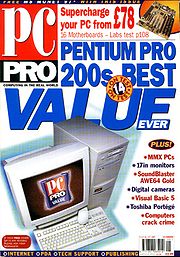 PC Pro is one of several computer magazines published monthly in the United Kingdom
United Kingdom
The United Kingdom of Great Britain and Northern IrelandIn the United Kingdom and Dependencies, other languages have been officially recognised as legitimate autochthonous languages under the European Charter for Regional or Minority Languages...
by Dennis Publishing. PC Pro also licenses individual articles (or even the whole magazine) for republication in various countries around the world - and some articles are translated into local languages. The magazine is, , the biggest selling PC monthly in the UK.

PC Pro is promoted as a magazine for "IT professionals, IT managers and power user
Power user
A power user is a user of a personal computer who has the ability to use advanced features of programs which are beyond the abilities of "normal" users, but is not necessarily capable of programming and system administration...
s." It is a fairly 'rounded' magazine as it contains information on many different aspects of IT (such as cheap hardware, extreme hardware, software, business, home, retailers) rather than just one of these areas like many UK PC magazines. While it is primarily Windows-focused, it does contain some open source and Apple content.

Each issue comes with a coverdisc - either a CD in the £3.99 version or a DVD in the £4.99 edition. The CD contains complete commercial software products (usually older versions) and commercial software trials. The DVD contains these and also a selection of applications which feature in every issue. These regular applications are usually freeware
Freeware
Freeware is computer software that is available for use at no cost or for an optional fee, but usually with one or more restricted usage rights. Freeware is in contrast to commercial software, which is typically sold for profit, but might be distributed for a business or commercial purpose in the...
or open source
Open source
The term open source describes practices in production and development that promote access to the end product's source materials. Some consider open source a philosophy, others consider it a pragmatic methodology...
.

The PC Pro team also publish a weekly podcast available on the Magazine website and on the iTunes Store
ITunes Store
The iTunes Store is a software-based online digital media store operated by Apple. Opening as the iTunes Music Store on April 28, 2003, with over 200,000 items to purchase, it is, as of April 2008, the number-one music vendor in the United States...
.