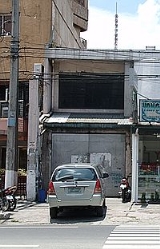 Encyclopedia
A fire at the Ozone Disco Club in Quezon City
Quezon City
Quezon City is the former capital and the most populous city in the Philippines. Located on the island of Luzon, Quezon City is one of the cities and municipalities that make up Metro Manila, the National Capital Region. The city was named after Manuel L...
, Philippines
Philippines
The Philippines , officially known as the Republic of the Philippines , is a country in Southeast Asia in the western Pacific Ocean. To its north across the Luzon Strait lies Taiwan. West across the South China Sea sits Vietnam...
broke out shortly after midnight, Philippine Standard Time
Philippine Standard Time
Philippine Standard Time , also known as Philippine Time , is the official name for the time in the Philippines. The country only has one time zone, the UTC+08:00 time zone. The country used the daylight saving time for a short time...
, March 18, 1996 (04:00:00 PM, March 17, 1996, GMT
Greenwich Mean Time
Greenwich Mean Time is a term originally referring to mean solar time at the Royal Observatory in Greenwich, London. It is arguably the same as Coordinated Universal Time and when this is viewed as a time zone the name Greenwich Mean Time is especially used by bodies connected with the United...
) leaving at least 162 people dead. It was officially acknowledged as the worst fire in Philippine history, and the world's worst nightclub fire since the 1977 Beverly Hills Supper Club fire
Beverly Hills Supper Club fire
The Beverly Hills Supper Club fire in Southgate, Kentucky is the third deadliest nightclub fire in U.S. history. It occurred on the night of May 28, 1977, during the Memorial Day weekend...
in Southgate, Kentucky
Southgate, Kentucky
Southgate is a city in Campbell County, Kentucky, United States, a part of metropolitan Cincinnati, Ohio. The population was 3,472 at the 2000 census.-History:...
.


About the Ozone Disco Club

The fire broke out on March 18, 1996. At the time of the fire, it was estimated that there were around 350 patrons and 40 club employees inside Ozone Disco, though it had been approved for occupancy for only 35 persons. Most of the club guests were high school and college students attending graduation or end-of-the-school-year celebrations. Survivors reported seeing sparks flying inside the disc jockey
Disc jockey
A disc jockey, also known as DJ, is a person who selects and plays recorded music for an audience. Originally, "disc" referred to phonograph records, not the later Compact Discs. Today, the term includes all forms of music playback, no matter the medium.There are several types of disc jockeys...
's booth shortly after midnight, followed by smoke which they thought was part of the party plan of the DJ.

Many of the bodies were discovered along the corridor leading to the only exit, piled up waist-high. Quezon City officials were quoted as saying that the club's emergency exit had been blocked by a new building next door, and that there was no proper fire exit. It was also reported that the exit had been locked from the outside by the club's guards, who had thought that a riot had taken place. 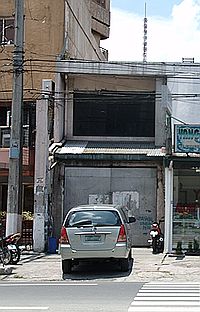 The final death count was reported as between 160 and 162 people, the latter being the figure cited by the trial court that heard the ensuing criminal case. The death toll was one of the worst ever for a nightclub fire, though it was subsequently surpassed by the República Cromagnon nightclub fire
República Cromagnon nightclub fire
República Cromañón was a nightclub in Buenos Aires, Argentina.On 30 December 2004, a fire broke out in the club, killing 194 people and injuring 714 others. The venue was playing host to rock group Callejeros and around 3,000 people were in attendance...
. In addition, at least 95 people were injured.

Six people involved with Westwood Entertainment were tried before the courts for criminal charges of "reckless imprudence resulting in multiple homicide and multiple serious injuries". On March 16, 2001, the president of Westwood Entertainment, Hermilo Ocampo, and the corporation's treasurer, Ramon Ng, were found guilty by a Quezon City trial court and sentenced to a four-year prison term, and fined 25 million pesos
Philippine peso
The peso is the currency of the Philippines. It is subdivided into 100 centavos . Before 1967, the language used on the banknotes and coins was English and so "peso" was the name used...
each. They and their co-accused (who were acquitted) were also ordered to indemnify the families of the deceased 150,000 pesos, and 100,000 pesos to the injured. The trial court concluded that Ocampo and Ng failed to provide fire exits and sprinklers inside the establishment, that the fire extinguishers they placed were defective, and that the lone exit was through a small door that swung inward and did not meet the standard set by the building code.

In November 2001, twelve officials of the Quezon City government were charged before the Sandiganbayan
Sandiganbayan
The Sandiganbayan is a special court in the Philippines which was established under Presidential Decree No. 1606. Its rank is equivalent to the Court of Appeals. The court consists of 14 Associate Justices and 1 Presiding Justice...
for reckless imprudence resulting in multiple homicides and multiple serious injuries. They were accused of allowing Ozone Disco to secure a certificate of annual inspection in 1995 "despite the inadequacy, insufficiency and impropriety of the documents submitted by the owners." In 2007, one of the twelve — the former city engineer and building official of Quezon City, Alfredo Macapugay — was discharged from criminal and civil liability after the Sandiganbayan concluded that he had no hand in the issuance of the necessary permits to Ozone Disco management.

As of 2008, the structure which housed the Ozone Disco remained standing in Timog Avenue, Quezon City, though the site has not been commercially used since then. For a few years after the incident there was a makeshift memorial on the site featuring photographs of the victims. This has since been dismantled, and no marker or official memorial commemorates the incident or its victims.

The October 2, 2008 episode of the GMA Network
GMA Network
GMA Network is a major commercial television & radio network in the Philippines. GMA Network is owned by GMA Network, Inc. a publicly listed company...
public affairs show Case Unclosed
Case Unclosed
Case Unclosed is a news and public affairs television show in the Philippines aired every Thursday evenings by GMA Network. The show is currently hosted by Arnold Clavio...
featured the Ozone Disco fire and its aftermath. The episode was directed by Adolfo Alix, Jr.
Adolfo Alix, Jr.
Adolfo Alix, Jr. or Adolf Alix is a Filipino screenwriter and film director.-Biography:Born October 17, 1978 in Makati City, Philippines....
. 2 days before the showing of this episode, September 30, 2008, Quezon City Mayor Feliciano Belmonte, Jr.
Feliciano Belmonte, Jr.
Feliciano "Sonny" Racimo Belmonte, Jr. is a member of the Philippine House of Representatives representing the Fourth District of Quezon City. He is also the house speaker of the Congress from 2010 to present. He was the mayor of Quezon City from 2001-2010.-Early Life and Career:Belmonte was born...
released an ordinance that warns the owners of entertainment establishments to use swing-in/swing-out doors.