Except in teleosts, the oviduct does not directly contact the ovary. Instead, the most anterior portion ends in a funnel-shaped structure called the infundibulum
Infundibulum of uterine tube
The third part of the uterine tube is the infundibulum. It terminates with the ostium of Fallopian tube, surrounded by fimbriae, one of which is attached to the ovary. Together, the infundibulum and fimbria find the oocyte after ovulation.-External links: - "The Female Pelvis: The Oviduct"...
, which collects eggs as they are released by the ovary into the body cavity.

The only female vertebrates to lack oviducts are the jawless fishes. In these species, the single fused ovary releases eggs directly into the body cavity. The fish eventually extrudes the eggs through small genital pores towards the rear of the body.

In amphibian
Amphibian
Amphibians , are a class of vertebrate animals including animals such as toads, frogs, caecilians, and salamanders. They are characterized as non-amniote ectothermic tetrapods...
s and lungfish
Lungfish
Lungfish are freshwater fish belonging to the Subclass Dipnoi. Lungfish are best known for retaining characteristics primitive within the Osteichthyes, including the ability to breathe air, and structures primitive within Sarcopterygii, including the presence of lobed fins with a well-developed...
es, the oviduct is a simple ciliated tube, lined with mucus
Mucus
In vertebrates, mucus is a slippery secretion produced by, and covering, mucous membranes. Mucous fluid is typically produced from mucous cells found in mucous glands. Mucous cells secrete products that are rich in glycoproteins and water. Mucous fluid may also originate from mixed glands, which...
-secreting glands that produce the jelly that surrounds the ovum
Ovum
An ovum is a haploid female reproductive cell or gamete. Both animals and embryophytes have ova. The term ovule is used for the young ovum of an animal, as well as the plant structure that carries the female gametophyte and egg cell and develops into a seed after fertilization...
. In all other vertebrates, there is normally some degree of specialisation of the tube, depending on the type of eggs produced.

In cartilaginous fishes, the mid portion of the tube develops as a shell gland
Nidamental gland
The nidamental gland is an internal organ found in some elasmobranchs and certain molluscs, including cephalopods and gastropods....
. The first portion of this gland secretes the egg white
Egg white
Egg white is the common name for the clear liquid contained within an egg. In chickens it is formed from the layers of secretions of the anterior section of the hen's oviduct during the passage of the egg. It forms around either fertilized or unfertilized egg yolks...
, while the lower portion secretes a hard, horny, capsule to protect the developing egg. Below the shell gland is the ovisac, a distended region in which eggs are stored prior to laying. In ovoviviparous species, the egg remains within the ovisac until it hatches. Some cartilaginous fishes, however, are truly viviparous, giving birth to live young, and producing no egg shell. In these forms the ovisac nurtures the developing embryo, often with the aid of vascular outgrowths similar to, but much simpler than, the mammalian placenta
Placenta
The placenta is an organ that connects the developing fetus to the uterine wall to allow nutrient uptake, waste elimination, and gas exchange via the mother's blood supply. "True" placentas are a defining characteristic of eutherian or "placental" mammals, but are also found in some snakes and...
.

The most primitive ray-finned fishes retain the simple structure also found in lungfishes, but in teleosts, folds of peritoneum
Peritoneum
The peritoneum is the serous membrane that forms the lining of the abdominal cavity or the coelom — it covers most of the intra-abdominal organs — in amniotes and some invertebrates...
enclose the ovary and upper part of the tube, fusing them into a single structure. The ovary itself is hollow, with eggs being shed into the central cavity, and thence passing directly into the oviduct. The enclosed nature of the female reproductive system in these fishes makes it impossible for eggs to escape into the general body cavity; a necessary development given that thousands or even millions of eggs may be released in a single spawning.

In amniote
Amniote
The amniotes are a group of tetrapods that have a terrestrially adapted egg. They include synapsids and sauropsids , as well as their fossil ancestors. Amniote embryos, whether laid as eggs or carried by the female, are protected and aided by several extensive membranes...
s - reptile
Reptile
Reptiles are members of a class of air-breathing, ectothermic vertebrates which are characterized by laying shelled eggs , and having skin covered in scales and/or scutes. They are tetrapods, either having four limbs or being descended from four-limbed ancestors...
s, birds, and mammal
Mammal
Mammals are members of a class of air-breathing vertebrate animals characterised by the possession of endothermy, hair, three middle ear bones, and mammary glands functional in mothers with young...
s - the egg is enclosed with an outer layer, or amnion
Amnion
The amnion is a membrane building the amniotic sac that surrounds and protects an embryo. It is developed in reptiles, birds, and mammals, which are hence called “Amniota”; but not in amphibians and fish , which are consequently termed “Anamniota”. The primary role of this is the protection of the...
, which has led to further development of the oviduct. In reptiles, birds, and monotreme
Monotreme
Monotremes are mammals that lay eggs instead of giving birth to live young like marsupials and placental mammals...
s, the main part of the oviduct is a muscular tube, capable of considerable distension to transport the large eggs that are produced. This part of the oviduct is lined with glands that secrete the components of the egg white. The lower portion of the oviduct, or uterus
Uterus
The uterus or womb is a major female hormone-responsive reproductive sex organ of most mammals including humans. One end, the cervix, opens into the vagina, while the other is connected to one or both fallopian tubes, depending on the species...
, has a thicker layer of smooth muscle
Smooth muscle
Smooth muscle is an involuntary non-striated muscle. It is divided into two sub-groups; the single-unit and multiunit smooth muscle. Within single-unit smooth muscle tissues, the autonomic nervous system innervates a single cell within a sheet or bundle and the action potential is propagated by...
and contains the glands that secrete the egg shell.

In marsupial
Marsupial
Marsupials are an infraclass of mammals, characterized by giving birth to relatively undeveloped young. Close to 70% of the 334 extant species occur in Australia, New Guinea, and nearby islands, with the remaining 100 found in the Americas, primarily in South America, but with thirteen in Central...
s and placental mammals, the uterus becomes lined by an endometrium
Endometrium
-Function:The endometrium is the innermost glandular layer and functions as a lining for the uterus, preventing adhesions between the opposed walls of the myometrium, thereby maintaining the patency of the uterine cavity. During the menstrual cycle or estrous cycle, the endometrium grows to a...
, and is more developed than in egg-laying amniotes. In many placental mammals, the uteri of each side become partially or wholly fused into a single organ, although in marsupials they remain completely separate. In mammals, the portion of the oviduct above the uterus is referred to as the fallopian tube
Fallopian tube
The Fallopian tubes, also known as oviducts, uterine tubes, and salpinges are two very fine tubes lined with ciliated epithelia, leading from the ovaries of female mammals into the uterus, via the utero-tubal junction...
. 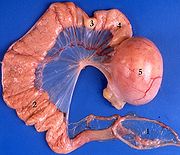