Encyclopedia
Ostracoda is a class
Class (biology)
In biological classification, class is* a taxonomic rank. Other well-known ranks are life, domain, kingdom, phylum, order, family, genus, and species, with class fitting between phylum and order...
of the Crustacea, sometimes known as the seed shrimp because of their appearance. Some 65,000 species (13,000 of which are extant taxa) have been identified, grouped into several orders.

Ostracods are small crustaceans, typically around 1 millimetre (0.0393700787401575 in) in size, but varying from 0.2 millimetre (0.0078740157480315 in) to 30 mm (1.2 in) in the case of Gigantocypris
Gigantocypris
Gigantocypris is a genus of ostracod crustacean in family Cypridinidae, and probably the most famous ostracod in the world. Its members are exceptionally large for ostracods, measuring up to across. The animals are orange–red in life, but live at depths of , where there is no natural sunlight...
. Their bodies are flattened from side to side and protected by a bivalve-like, chitin
Chitin
Chitin n is a long-chain polymer of a N-acetylglucosamine, a derivative of glucose, and is found in many places throughout the natural world...
ous or calcareous valve or "shell". The hinge of the two valves is in the upper (dorsal) region of the body. Ostracods are grouped together based on gross morphology, but the group may not be monophyletic
Monophyly
In common cladistic usage, a monophyletic group is a taxon which forms a clade, meaning that it contains all the descendants of the possibly hypothetical closest common ancestor of the members of the group. The term is synonymous with the uncommon term holophyly...
; their molecular phylogeny
Molecular phylogeny
Molecular phylogenetics is the analysis of hereditary molecular differences, mainly in DNA sequences, to gain information on an organism's evolutionary relationships. The result of a molecular phylogenetic analysis is expressed in a phylogenetic tree...
remains ambiguous.

Ecologically, marine ostracods can be part of the zooplankton
Zooplankton
Zooplankton are heterotrophic plankton. Plankton are organisms drifting in oceans, seas, and bodies of fresh water. The word "zooplankton" is derived from the Greek zoon , meaning "animal", and , meaning "wanderer" or "drifter"...
or (most commonly) they are part of the benthos
Benthos
Benthos is the community of organisms which live on, in, or near the seabed, also known as the benthic zone. This community lives in or near marine sedimentary environments, from tidal pools along the foreshore, out to the continental shelf, and then down to the abyssal depths.Many organisms...
, living on or inside the upper layer of the sea floor. Many ostracods, especially the Podocopida
Podocopida
Podocopida is an order of ostracods in the subclass Podocopa. It is divided into five suborders – Bairdiocopina, Cypridocopina, Cytherocopina, Darwinulocopina and Sigilliocopina. It is the most diverse of the four orders of ostracods, and also has a rich fossil record....
, are also found in fresh water and terrestrial species of Mesocypris are known from humid forest soils of South Africa
South Africa
The Republic of South Africa is a country in southern Africa. Located at the southern tip of Africa, it is divided into nine provinces, with of coastline on the Atlantic and Indian oceans...
, Australia
Australia
Australia , officially the Commonwealth of Australia, is a country in the Southern Hemisphere comprising the mainland of the Australian continent, the island of Tasmania, and numerous smaller islands in the Indian and Pacific Oceans. It is the world's sixth-largest country by total area...
, New Zealand
New Zealand
New Zealand is an island country in the south-western Pacific Ocean comprising two main landmasses and numerous smaller islands. The country is situated some east of Australia across the Tasman Sea, and roughly south of the Pacific island nations of New Caledonia, Fiji, and Tonga...
and Tasmania
Tasmania
Tasmania is an Australian island and state. It is south of the continent, separated by Bass Strait. The state includes the island of Tasmania—the 26th largest island in the world—and the surrounding islands. The state has a population of 507,626 , of whom almost half reside in the greater Hobart...
. They have a wide range of diets, and the group includes carnivores, herbivores, scavengers, and filter feeders.

Ostracod comes from the Greek óstrakon meaning shell or tile. The word ostracize comes from the same root due to the practice of voting with shells or potsherds. 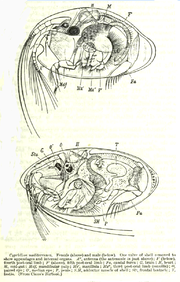 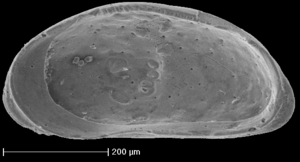 Ostracods are "by far the most common arthropods in the fossil record" with fossils being found from the Cambrian
Cambrian
The Cambrian is the first geological period of the Paleozoic Era, lasting from Mya ; it is succeeded by the Ordovician. Its subdivisions, and indeed its base, are somewhat in flux. The period was established by Adam Sedgwick, who named it after Cambria, the Latin name for Wales, where Britain's...
to the present day. An outline microfauna
Microfauna
Microfauna refers to microscopic organisms that exhibit animal-like qualities. Microfauna are represented in the animal kingdom and the protist kingdom...
l zonal scheme based on both Foraminifera
Foraminifera
The Foraminifera , or forams for short, are a large group of amoeboid protists which are among the commonest plankton species. They have reticulating pseudopods, fine strands of cytoplasm that branch and merge to form a dynamic net...
and Ostracoda was compiled by M. B. Hart. Freshwater ostracods have even been found in Baltic amber
Baltic amber
The Baltic region is home to the largest known deposit of amber, called Baltic amber or succinite, with about 80% of the world's known amber found there. It dates from 44 million years ago...
of Eocene
Eocene
The Eocene Epoch, lasting from about 56 to 34 million years ago , is a major division of the geologic timescale and the second epoch of the Paleogene Period in the Cenozoic Era. The Eocene spans the time from the end of the Palaeocene Epoch to the beginning of the Oligocene Epoch. The start of the...
age, having presumably been washed onto trees during flood
Flood
A flood is an overflow of an expanse of water that submerges land. The EU Floods directive defines a flood as a temporary covering by water of land not normally covered by water...
s.

Ostracods have been particularly useful for the biozonation
Biostratigraphy
Biostratigraphy is the branch of stratigraphy which focuses on correlating and assigning relative ages of rock strata by using the fossil assemblages contained within them. Usually the aim is correlation, demonstrating that a particular horizon in one geological section represents the same period...
of marine strata on a local or regional scale, and they are invaluable indicators of paleo-environments because of their widespread occurrence, small size, easily-preservable generally-moulted calcified bivalve carapaces, the valves are a commonly found microfossil.

The body of an ostracod is encased by two valves, superficially resembling the shell of a clam. A distinction is made between the valve (hard parts) and the body with its appendages (soft parts).

The body consists of a head and thorax
Thorax
The thorax is a division of an animal's body that lies between the head and the abdomen.-In tetrapods:...
, separated by a slight constriction. Unlike many other crustaceans, the body is not clearly divided into segments
Segmentation (biology)
Segmentation in biology refers to either a type of gastrointestinal motility or the division of some animal and plant body plans into a series of repetitive segments. This article will focus on the segmentation of animal body plans, specifically using the examples of the phyla Arthropoda,...
. The abdomen
Abdomen
In vertebrates such as mammals the abdomen constitutes the part of the body between the thorax and pelvis. The region enclosed by the abdomen is termed the abdominal cavity...
is regressed or absent, whereas the adult gonads are relatively large.

The head is the largest part of the body, and bears most of the appendages. There are two pairs of well-developed antennae
Antenna (biology)
Antennae in biology have historically been paired appendages used for sensing in arthropods. More recently, the term has also been applied to cilium structures present in most cell types of eukaryotes....
, which the animal uses to swim through the water. In addition, there is a pair of mandibles
Mandible (arthropod)
thumb|250px|The mandibles of a [[Bull ant]]The mandible of an arthropod is either of a pair of mouthparts used for biting, cutting and holding food. Mandibles are often simply referred to as jaws. Mandibles are present in the extant subphyla Myriapoda , Crustacea and Hexapoda...
and two pairs of maxilla
Maxilla
The maxilla is a fusion of two bones along the palatal fissure that form the upper jaw. This is similar to the mandible , which is also a fusion of two halves at the mental symphysis. Sometimes The maxilla (plural: maxillae) is a fusion of two bones along the palatal fissure that form the upper...
e. The thorax typically has two pairs of appendages, but these are reduced to a single pair, or entirely absent, in many species. There are two "rami", or projections, from the tip of the tail, that point downwards and slightly forward from the rear of the shell.

Ostracods typically have no gills, instead taking in oxygen through branchial plates on the body surface. Most ostracods have no heart
Heart
The heart is a myogenic muscular organ found in all animals with a circulatory system , that is responsible for pumping blood throughout the blood vessels by repeated, rhythmic contractions...
or circulatory system, and blood simply circulates between the valves of the shell. Nitrogenous waste is excreted through glands on the maxillae, antennae, or both.

The primary sense of ostracods is likely touch, as they have several sensitive hairs on the body and appendages. However, they do possess a single nauplius eye, and, in some cases, a pair of true compound eyes as well.

Male ostracods have two penes
Penis
The penis is a biological feature of male animals including both vertebrates and invertebrates...
, corresponding to two genital openings, or "gonopores" on the female. The individual sperm are often large, and are coiled up within the testis prior to mating; in some cases, the uncoiled sperm can be up to six times the length of the male ostracod itself. Mating typically occurs during swarming, with large numbers of females swimming the join the males. Some species are partially or wholly parthenogenetic.

In most ostracods, eggs are either laid directly into the water as plankton, or are attached to vegetation or the substratum. However, in some species, the eggs are brooded inside the shell, giving them a greater degree of protection. The eggs hatch into nauplius larvae, which already have a hard shell.

A variety of fauna prey upon ostracods in both aquatic and terrestrial environments. An example of predation in the marine environment is the action of certain Cuspidariidae
Cuspidariidae
Cuspidariidae is a family of bivalves in the order Pholadomyoida.-Genera and species in the family Cuspidariidae:* Austroneaera Powell, 1937** Austroneaera brevirostris Powell, 1937** Austroneaera finlayi Powell, 1937* Cardiomya A...
in detecting ostracods with cilia protruding from inhalant structures, thence drawing the ostracod prey in by a violent suction action. Predation from higher animals also occurs; for example, amphibians such as the Rough-skinned Newt
Rough-skinned Newt
The rough-skinned newt is a North American newt known for its strong poison.- Toxicity :Many newts produce toxins to avoid predation, but the toxins of the genus Taricha are particularly potent...
prey upon certain ostracods.

A new method is in development called Mutual Ostracod Temperature Range (MOTR), similar to the Mutual Climate Range (MCR) used for beetles, which can be used to infer palaeotemperatures.

Some ostracods have a light organ in which they produce luminescent chemicals. Most use the light as predation defense, while some use the light for mating (only in the Caribbean). In Malaysia, these ostracods are called "blue sand" and glow blue in the dark at night.