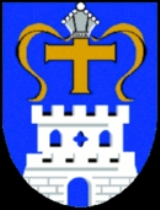 The District of Eutin emerged from the Principality, and later Region of Lübeck, which again ermerged from the secularised prince-bishopric of Lübeck. In 1803 it became an exclave of the Duchy of Oldenburg (which confusingly has nothing to do with the Holsteinian city of Oldenburg). In 1937 it was moved to Prussia
Prussia
Prussia was a German kingdom and historic state originating out of the Duchy of Prussia and the Margraviate of Brandenburg. For centuries, the House of Hohenzollern ruled Prussia, successfully expanding its size by way of an unusually well-organized and effective army. Prussia shaped the history...
as the district of Eutin within the Prussian province of Schleswig-Holstein
Province of Schleswig-Holstein
The Province of Schleswig-Holstein was a province of the Kingdom of Prussia and the Free State of Prussia from 1868 to 1946. It was created from the Duchies of Schleswig and Holstein, which had been conquered by Prussia and the Austrian Empire from Denmark in the Second War of Schleswig in 1864...
.

The region of Oldenburg was a part of the duchy of Holstein
Holstein
Holstein is the region between the rivers Elbe and Eider. It is part of Schleswig-Holstein, the northernmost state of Germany....
. In 1864 Holstein became subordinate to Prussia, which soon afterwards established the district of Oldenburg in Holstein.

The district consists of the Wagrien
Wagrien
Wagria is the northeastern part of Holstein in the German state of Schleswig-Holstein, corresponding roughly to the districts of Plön and Ostholstein...
peninsula between the Bay of Lübeck
Bay of Lübeck
The Bay of Lübeck is a basin in the southwestern Baltic Sea, off the shores of German lands of Mecklenburg-Vorpommern and Schleswig-Holstein. It forms the southwestern part of the Bay of Mecklenburg....
and the Bay of Kiel
Bay of Kiel
The Bay of Kiel is a bay in the southwestern Baltic Sea, off the shores of Schleswig-Holstein in Germany and the islands of Denmark. It is connected with the Bay of Mecklenburg in the east, the Little Belt in the northwest, and the Great Belt in the North....
, the island of Fehmarn
Fehmarn
Fehmarn is an island and - since 2003 - a town on this island in the Baltic Sea, off the eastern coast of Schleswig-Holstein, Germany, and ca. 18 kilometers south of the Danish island of Lolland...
, the eastern part of the region called "Holsteinische Schweiz" (Holsatian Switzerland) and the northern suburbs of Lübeck
Lübeck
The Hanseatic City of Lübeck is the second-largest city in Schleswig-Holstein, in northern Germany, and one of the major ports of Germany. It was for several centuries the "capital" of the Hanseatic League and, because of its Brick Gothic architectural heritage, is listed by UNESCO as a World...
.

Holsatian Switzerland is an area full of lakes and woody hills, which is shared with the adjoining district of Plön
Plön (district)
Plön is a district in Schleswig-Holstein, Germany. It is bounded by the districts of Ostholstein and Segeberg, the city of Neumünster, the district of Rendsburg-Eckernförde, the city of Kiel and the Baltic Sea.- History :...
. The Bungsberg, though only 168 m in height, is the highest elevation in Schleswig-Holstein. The island of Fehmarn is the third largest island of Germany. Since 1963 it has been connected to the mainland by a suspension bridge
Suspension bridge
A suspension bridge is a type of bridge in which the deck is hung below suspension cables on vertical suspenders. Outside Tibet and Bhutan, where the first examples of this type of bridge were built in the 15th century, this type of bridge dates from the early 19th century...
. 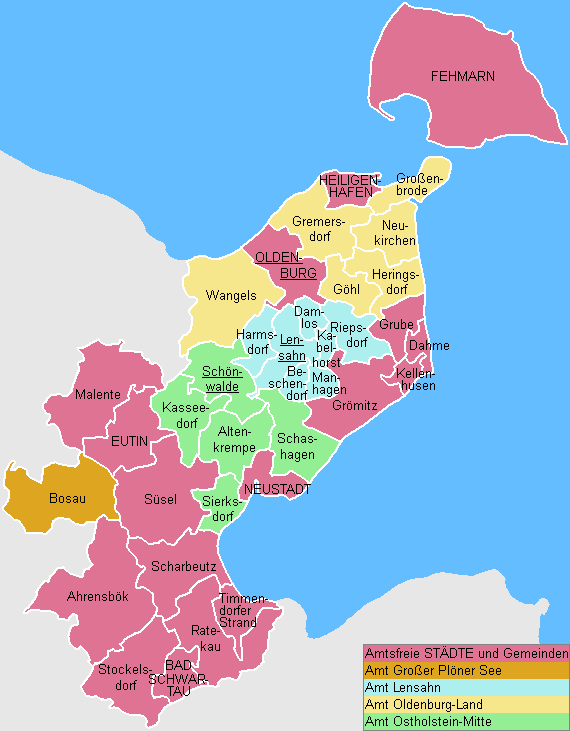