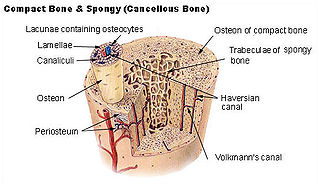 Bone tissue is a mineralized connective tissue
Mineralized tissues
Mineralized tissues are biological tissues that incorporate minerals into soft matrices. Typically these tissues form a protective shield or structural support...
. It is formed by cells, called osteoblast
Osteoblast
Osteoblasts are mononucleate cells that are responsible for bone formation; in essence, osteoblasts are specialized fibroblasts that in addition to fibroblastic products, express bone sialoprotein and osteocalcin.Osteoblasts produce a matrix of osteoid, which is composed mainly of Type I collagen...
s, that deposit a matrix of Type-I collagen
Type-I collagen
Type-I collagen is the most abundant collagen of the human body.It is present in scar tissue, the end product when tissue heals by repair.It is found in tendons, the endomysium of myofibrils and the organic part of bone.- See also :* Collagen...
and also release calcium, magnesium, and phosphate ions that ultimately combine chemically within the collagenous matrix into a crystalline mineral, known as bone mineral
Bone mineral
Bone mineral is the inorganic component of bone. Bone mineral is formed from carbonated hydroxyapatite with lower crystallinity....
, in the form of hydroxyapatite. The combination of hard mineral and flexible collagen makes bone harder and stronger than cartilage
Cartilage
Cartilage is a flexible connective tissue found in many areas in the bodies of humans and other animals, including the joints between bones, the rib cage, the ear, the nose, the elbow, the knee, the ankle, the bronchial tubes and the intervertebral discs...
without being brittle. Compact bone consists of a repeating structure called a Haversian system
Osteon
The osteon, or Haversian system, is the fundamental functional unit of much compact bone. Osteons, roughly cylindrical structures that are typically several millimeters long and around 0.2mm in diameter, are present in many of the bones of most mammals, birds, reptiles, and amphibians.Each osteon...
, or osteon, which is the primary anatomical and functional unit. Each osteon has concentric layers of mineralized matrix, called concentric lamellae, which are deposited around a central canal, also known as the Haversian canal, each containing a blood and nerve supply.

There are two types of osseous tissue: compact
Cortical bone
Cortical bone, synonymous with compact bone, is one of the two types of osseous tissue that form bones. Cortical bone facilitates bone's main functions: to support the whole body, protect organs, provide levers for movement, and store and release chemical elements, mainly calcium. As its name...
and spongy. Compact tissue is synonymous with cortical bone, and spongy tissue is synonymous with trabecular and cancellous bone. Compact bone forms the extremely hard exterior while spongy bone fills the hollow interior. The tissues are biologically identical; the difference is in how the microstructure is arranged.

Bone tissue is different from bones themselves — bones are organs made up of bone tissue as well as marrow, blood vessels, epithelium and nerves, while bone tissue refers specifically to the mineral matrix that form the rigid sections of the organ.