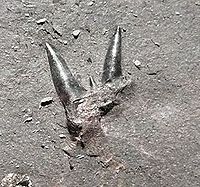 Orthacanthus is an extinct genus
Genus
In biology, a genus is a low-level taxonomic rank used in the biological classification of living and fossil organisms, which is an example of definition by genus and differentia...
of fresh-water shark
Shark
Sharks are a type of fish with a full cartilaginous skeleton and a highly streamlined body. The earliest known sharks date from more than 420 million years ago....
from a family of prehistoric sharks known as Xenacanth
Xenacanthida
Xenacanthida is an order of prehistoric sharks that appeared during the Lower Carboniferous period. The family includes the families Xenacanthidae, Diplodoselachidae, and Orthacanthidae. The most notable members of the group are the genera Xenacanthus and Orthacanthus. Some Xenacanthus may have...
s. Members of the genus had a long spine growing from the back of their skull and a very long dorsal fin
Dorsal fin
A dorsal fin is a fin located on the backs of various unrelated marine and freshwater vertebrates, including most fishes, marine mammals , and the ichthyosaurs...
, which ran all along its back giving it an eel
Eel
Eels are an order of fish, which consists of four suborders, 20 families, 111 genera and approximately 800 species. Most eels are predators...
-like appearance.

About 260 million years ago, Orthacanthus was the terror of freshwater swamps and bayous in Europe and North America. Its body reached nearly 10 feet (3 meters) in length and its powerful jaws were lined with double-fanged teeth. They first appeared almost 400 million years ago in the Devonian
Devonian
The Devonian is a geologic period and system of the Paleozoic Era spanning from the end of the Silurian Period, about 416.0 ± 2.8 Mya , to the beginning of the Carboniferous Period, about 359.2 ± 2.5 Mya...
, and became extinct just before the Mesozoic
Mesozoic
The Mesozoic era is an interval of geological time from about 250 million years ago to about 65 million years ago. It is often referred to as the age of reptiles because reptiles, namely dinosaurs, were the dominant terrestrial and marine vertebrates of the time...
, about 225 million years ago.