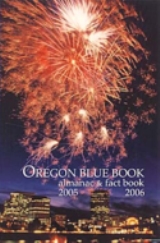 Encyclopedia
The Oregon Blue Book is the official directory and fact book for the U.S. state
U.S. state
A U.S. state is any one of the 50 federated states of the United States of America that share sovereignty with the federal government. Because of this shared sovereignty, an American is a citizen both of the federal entity and of his or her state of domicile. Four states use the official title of...
of Oregon
Oregon
Oregon is a state in the Pacific Northwest region of the United States. It is located on the Pacific coast, with Washington to the north, California to the south, Nevada on the southeast and Idaho to the east. The Columbia and Snake rivers delineate much of Oregon's northern and eastern...
copyrighted by the Oregon Secretary of State
Oregon Secretary of State
The Secretary of State of Oregon, an elected constitutional officer within the executive branch of government of the U.S. state of Oregon, is first in line of succession to the Governor. The duties of office are: auditor of public accounts, chief elections officer, and administrator of public...
and published by the Office of the Secretary's Archives Division
Oregon State Archives
The Archives Division of the Office of the Secretary of State of Oregon, or Oregon State Archives, is an agency of the Office of the Oregon Secretary of State charged with preserving and providing access to government records. It also publishes the Oregon Blue Book and Oregon Administrative Rules...
. As Governor Ted Kulongoski
Ted Kulongoski
Theodore R. "Ted" Kulongoski is an American politician, who served as the 36th Governor of Oregon. A Democrat, he has served in both houses of the Oregon Legislative Assembly, as the state Insurance Commissioner, the Attorney General, and an Associate Justice on the Oregon Supreme Court.-Early...
notes in his introduction for the 2005–2006 edition, it "provides information about our culture, our ecology, and our government... Here you'll find information on state, county, and local government, government officials, boards and commissions, and our judiciary."