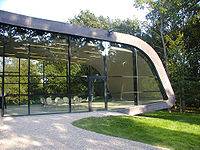 Ordrupgaard is a state-owned art museum situated near Jægersborg Dyrehave, north of Copenhagen, Denmark. The museum houses one of Northern Europe’s most considerable collections of Danish and French art from the19th and beginning of the 20th century.

Wilhelm Hansen established his collection of Danish art covering the19th to the beginning of the 20th century during the period of 1892 to 1916. The Danish Golden Age is comprehensively represented by works by, amongst others: Christoffer Wilhelm Eckersberg
Christoffer Wilhelm Eckersberg
Christoffer Wilhelm Eckersberg was a Danish painter. He was born in Blåkrog in the Duchy of Schleswig , to Henrik Vilhelm Eckersberg, painter and carpenter, and Ingeborg Nielsdatter...
, Christen Købke
Christen Købke
Christen Schiellerup Købke , Danish painter, was born in Copenhagen to Peter Berendt Købke, a baker, and his wife Cecilie Margrete. He was one of 11 children...
, Johan Thomas Lundbye, P.C. Skovgaard and Wilhelm Marstrand
Wilhelm Marstrand
Nicolai Wilhelm Nikolaj Marstrand , painter and illustrator, was born in Copenhagen, Denmark to Nicolai Jacob Marstrand, instrument maker and inventor, and Petra Othilia Smith...
. The main part of the collection, however, testifies to Wilhelm Hansen’s interest for contemporary art with works by artists such as: L.A. Ring, Vilhelm Hammershøi
Vilhelm Hammershøi
Vilhelm Hammershøi , often written in English Vilhelm Hammershoi , was a Danish painter. He is known for his poetic, low-key portraits and interiors. In 1997, Denmark issued a postage stamp in his honor.-Life:...
and Theodor Philipsen
Theodor Philipsen
Theodor Philipsen was a Danish painter.Philipsen has been considered an innovator of 19th century Danish art. He took Danish art into a new level of impressionism and naturalism. He was influenced by French art, this influence beginning in his first time in Paris from 1874–1876...
, not forgetting the Fynbo Painters Johannes Larsen
Johannes Larsen
Johannes Larsen was a Danish nature painter.-Biography:Born in Kerteminde on Funen, Larsen studied art at the Free School in Copenhagen under Kristian Zahrtmann in the 1880s. There he met other painters from Funen, notably Fritz Syberg and Peter Hansen, both from the southern port of Faaborg, and...
, Fritz Syberg
Fritz Syberg
Christian Friedrich Wilhelm Heinrich Syberg, generally known as Fritz Syberg, was a Danish painter and illustrator, one of the reactionary Fynboerne or "Funen Painters" group living and working on the island of Funen.-Biography:Syberg, from a poor background in Fåborg, first served a house...
and Peter Hansen
Peter Hansen
Peter Hansen may refer to:*Peter Marius Hansen, , Danish painter*Peter Hansen , Danish relief worker*Peter Andreas Hansen , Danish astronomer*Peter Hansen , American actor*Peter O...
, Wilhelm Hansen’s childhood friend.

During the 1st World War, Wilhelm Hansen focused his interest on French art. From 1916 to 1918 he purchased French paintings, pastels, drawings and sculptures, thus laying the foundation for an actual art museum.


The Collection of Furniture and Handicrafts

Parallel to Wilhelm Hansen’s interest in Danish and French art was his interest for furniture and handicrafts. He was especially interested in ceramics, chandeliers and furniture executed by Thorvald Bindesbøll (1846-1908).

This consortium, founded in 1918 by Wilhelm Hansen together with the collector Herman Heilbuth (1861-1945) and art dealers Winkel & Magnussen, was of great importance to the French purchases. Their declared goal was “Buying and selling works of art with the purpose of bringing good and outstanding art to Scandinavia”. For this reason they bought several collections “en bloc” in Paris.


The Inauguration of Ordrupgaard, 14th of September 1918

Wilhelm and Henny Hansen bought a large piece of land by Ordrup Krat, near Jægersborg Dyrehave, north of Copenhagen, Denmark. Between 1916 and 1918 they built their stately home Ordrupgaard, designed by architect Gotfred Tvede (1863-1947). At the same time an extensive park was laid out by landscape gardener Valdemar Fabricius Hansen (1866-1953). Ordrupgaard was inaugurated on the 14th of September 1918. In his opening speech Wilhelm Hansen declared that the collection would be left to the Danish State.

Ordrupgaard was originally built as a three-winged trellised country mansion in the neo-classical style. The gallery which houses the French collection is connected to the main building by a small conservatory. Additionally a porter’s lodge, a driver’s residence (now demolished) and a coach house (now named “Lavendelhuset”/ The Lavender House) were erected. A shed and a small half-timbered summerhouse comprise the rest of the original buildings on the estate.

The Park at Ordrupgaard is laid out in the English style with a smaller French-inspired rose garden, originally adorned by a ceramic fountain by Jean Gauguin (now placed in the conservatory due to conservational reasons).

The Park at Ordrupgaard originally functioned as a kitchen garden as well as a flower garden. The extensive produce and the many fruit trees sustained the family with fresh fruit and vegetables throughout the year while the rest of the grounds were used for leisure and contemplation.

From the summerhouse could be viewed, at the far end of the park (where now there is a meadow) a small lake encompassing an island complete with rowing boat. There were also small ponds around the grounds, which have since been filled in.


The “Landmandsbank” Crash and partial Sale of the Collection

In 1922 Wilhelm Hansen suffered a massive financial and personal loss. “Landmandsbanken”, in which the Consortium had taken loans for the purchase of art works, collapsed. In order to pay off his debt Wilhelm Hansen sold more than half of his French collection – approximately 82 pieces. Among these were important works by Paul Cézanne, Édouard Manet and Paul Gauguin. Many of these works are now housed at the “Ny Carlsberg Glyptotek” in Copenhagen and “The National Museum of Western Art” in Tokyo.
Wilhelm Hansen overcame the crisis and from 1923 to 1933 compensated for his losses by buying new, specifically French paintings, which are still at Ordrupgaard.

After the death of Wilhelm Hansen in 1936, Henny Hansen lived on alone at Ordrupgaard. At her death in 1951 she left the collection, the house and the park to the Danish State, as Wilhelm Hansen had wished. In 1953 Ordrupgaard was opened to the public as a state-owned art museum.

On the 30th of August 2005 Ordrupgaard inaugurated the new extension designed by the Iraqi-born architect Zaha Hadid
Zaha Hadid
Zaha Hadid, CBE is an Iraqi-British architect.-Life and career:Hadid was born in 1950 in Baghdad, Iraq. She received a degree in mathematics from the American University of Beirut before moving to study at the Architectural Association School of Architecture in London.After graduating she worked...
(1950-). The extension measures 1,150 sq.m. and has improved the space, climate and security conditions so that Ordrupgaard is now able to present special exhibitions at an international level. The extension is constructed in glass and black lava concrete joined together to form a deconstructivistic and organic body.


The House of Finn Juhl

From 1941 to 1942 furniture designer Finn Juhl designed and furnished his own house next door to Ordrupgaard. The house is one of the first functionalistic one-family houses in Denmark. Here Finn Juhl lived until his death in 1989. Finn Juhl’s widow Hanne Wilhelm Hansen left the house and its interior unchanged. On 3rd of April 2008 the house opened as a separate, additional part of Ordrupgaard Art Museum, thanks to a private donation from Birgit Lyngbye Pedersen.