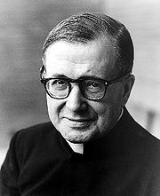 Overview
Opus Dei, formally known as The Prelature of the Holy Cross and Opus Dei , is an organization of the Catholic Church that teaches that everyone is called to holiness and that ordinary life is a path to sanctity
Sacred
Holiness, or sanctity, is in general the state of being holy or sacred...
. The majority of its membership are lay people, with secular priests
Secular clergy
The term secular clergy refers to deacons and priests who are not monastics or members of a religious order.-Catholic Church:In the Catholic Church, the secular clergy are ministers, such as deacons and priests, who do not belong to a religious order...
under the governance of a prelate
Prelate
A prelate is a high-ranking member of the clergy who is an ordinary or who ranks in precedence with ordinaries. The word derives from the Latin prælatus, the past participle of præferre, which means "carry before", "be set above or over" or "prefer"; hence, a prelate is one set over others.-Related...
(bishop) appointed by the pope. Opus Dei is Latin
Ecclesiastical Latin
Ecclesiastical Latin is the Latin used by the Latin Rite of the Catholic Church in all periods for ecclesiastical purposes...
for "Work of God", hence the organization is often referred to by members and supporters as "the Work".

Founded in Spain in 1928 by the Catholic priest St.

Bearing a secret sword of goodness and truth, Opus Dei is the most important spiritual movement of our time.

Amidst the cynicism and materialism of our time, it is impossible not to be heartened by Opus Dei's dedication to cultivating the potential spiritual and practical gift of every person and every occupation.

Opus Dei plays an extremely important role in the Church today. Its mission of helping people find holiness in their work is a very important one. It also provides spiritual direction and inspiration to many people of all ages, both Catholics and non-Catholics. I have the highest regard for the work and members of Opus Dei.

The work of Escrivá de Balaguer, will undoubtedly mark the 21st century. This is a prudent and reasonable wager. Do not pass close to this contemporary without paying him close attention.

The Christian West cannot exist without the Christian East, and vice versa. That is why Pope John Paul II spoke about the “two lungs of Europe.” Escrivá, in proclaiming the idea of a “Christian materialism,” unites the two lungs. He spiritualizes matter, understood in the West in so pragmatic a way, and he materializes the spirit, which is too spiritualized in the East. That’s why I say that the teaching of Josemaría Escrivá is inherently ecumenical.