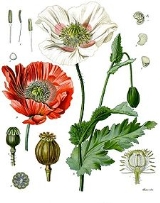 Overview
Opium poppy, Papaver somniferum, is the species
Species
In biology, a species is one of the basic units of biological classification and a taxonomic rank. A species is often defined as a group of organisms capable of interbreeding and producing fertile offspring. While in many cases this definition is adequate, more precise or differing measures are...
of plant
Plant
Plants are living organisms belonging to the kingdom Plantae. Precise definitions of the kingdom vary, but as the term is used here, plants include familiar organisms such as trees, flowers, herbs, bushes, grasses, vines, ferns, mosses, and green algae. The group is also called green plants or...
from which opium
Opium
Opium is the dried latex obtained from the opium poppy . Opium contains up to 12% morphine, an alkaloid, which is frequently processed chemically to produce heroin for the illegal drug trade. The latex also includes codeine and non-narcotic alkaloids such as papaverine, thebaine and noscapine...
and poppy seed
Poppy seed
Poppy seed is an oilseed obtained from the opium poppy . The tiny kidney-shaped seeds have been harvested from dried seed pods by various civilizations for thousands of years...
s are extracted. Opium is the source of many opiate
Opiate
In medicine, the term opiate describes any of the narcotic opioid alkaloids found as natural products in the opium poppy plant.-Overview:Opiates are so named because they are constituents or derivatives of constituents found in opium, which is processed from the latex sap of the opium poppy,...
s, including morphine
Morphine
Morphine is a potent opiate analgesic medication and is considered to be the prototypical opioid. It was first isolated in 1804 by Friedrich Sertürner, first distributed by same in 1817, and first commercially sold by Merck in 1827, which at the time was a single small chemists' shop. It was more...
(and its derivative heroin), thebaine
Thebaine
Thebaine , its name coming from the Greek Θῆβαι, Thēbai, an ancient city in Upper Egypt, is an opiate alkaloid. A minor constituent of opium, thebaine is chemically similar to both morphine and codeine, but has stimulatory rather than depressant effects, causing convulsions similar to strychnine...
, codeine
Codeine
Codeine or 3-methylmorphine is an opiate used for its analgesic, antitussive, and antidiarrheal properties...
, papaverine
Papaverine
Papaverine is an opium alkaloid antispasmodic drug, used primarily in the treatment of visceral spasm, vasospasm , and occasionally in the treatment of erectile dysfunction...
, and noscapine
Noscapine
Noscapine is a benzylisoquinoline alkaloid from plants of the Papaveraceae family, without significant painkilling properties. This agent is primarily used for its antitussive effects. It has also been shown to have anticancer activity...
. The Latin botanical name means the "sleep-bringing poppy", referring to the sedative
Sedative
A sedative or tranquilizer is a substance that induces sedation by reducing irritability or excitement....
properties of some of these opiates.

The poppy is the only species of Papaveraceae
Papaveraceae
Papaveraceae, informally known as the poppy family, are an economically important family of 44 genera and approximately 770 species of flowering plants in the order Ranunculales. The family is cosmopolitan, occurring in temperate and subtropical climates, but almost unknown in the tropics...
that is an agricultural
Agriculture
Agriculture is the cultivation of animals, plants, fungi and other life forms for food, fiber, and other products used to sustain life. Agriculture was the key implement in the rise of sedentary human civilization, whereby farming of domesticated species created food surpluses that nurtured the...
crop grown on a large scale.

That used opium poppy for begals