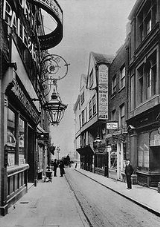 Overview
The Opera Comique was a 19th-century theatre constructed in Westminster, London
London
London is the capital city of :England and the :United Kingdom, the largest metropolitan area in the United Kingdom, and the largest urban zone in the European Union by most measures. Located on the River Thames, London has been a major settlement for two millennia, its history going back to its...
, between Wych Street
Wych Street
Wych Street was a street in London, roughly where Australia House now stands on Aldwych. It ran west from the church of St Clement Danes on the Strand to a point towards the southern end of Drury Lane...
and Holywell Street with entrances on the East Strand
Strand, London
Strand is a street in the City of Westminster, London, England. The street is just over three-quarters of a mile long. It currently starts at Trafalgar Square and runs east to join Fleet Street at Temple Bar, which marks the boundary of the City of London at this point, though its historical length...
. It opened in 1870 and was demolished in 1902, to make way for the construction of the Aldwych
Aldwych
Aldwych is a place and road in the City of Westminster in London, England.-Description:Aldwych, the road, is a crescent, connected to the Strand at both ends. At its centre, it meets the Kingsway...
and Kingsway
Kingsway
-Canada:*Burnaby—Kingsway, a federal electoral district in British Columbia between 1988 and 1997*Kingsway , a road in Edmonton, Alberta *Kingsway , a road in Vancouver, British Columbia...
. It is perhaps best remembered for hosting several of the early Gilbert and Sullivan
Gilbert and Sullivan
Gilbert and Sullivan refers to the Victorian-era theatrical partnership of the librettist W. S. Gilbert and the composer Arthur Sullivan . The two men collaborated on fourteen comic operas between 1871 and 1896, of which H.M.S...
operas.
The Opera Comique opened in 1870, followed shortly by construction of the adjoining Globe Theatre
Globe Theatre (Newcastle Street)
The Globe was a Victorian theatre built in 1868 and demolished in 1902. It was the third of five London theatres to bear the name. It was also known at various times as the Royal Globe Theatre or Globe Theatre Royal. Its repertoire consisted mainly of comedies and musical shows...
in Newcastle Street.

What was the last Gilbert & Sullivan opera performed at the 'Opera Comique' theatre in London?
More
x