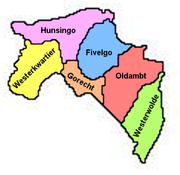 The Ommelanden are the parts of Groningen province
Groningen (province)
Groningen [] is the northeasternmost province of the Netherlands. In the east it borders the German state of Niedersachsen , in the south Drenthe, in the west Friesland and in the north the Wadden Sea...
that surround Groningen city. Usually mentioned as synonym for the province in the expression Stad en Ommeland ("city and surrounding lands").

The area was Frisian-speaking, but under the influence of the Saxon
Saxons
The Saxons were a confederation of Germanic tribes originating on the North German plain. The Saxons earliest known area of settlement is Northern Albingia, an area approximately that of modern Holstein...
city of Groningen most of the area turned to speaking Low Saxon
Dutch Low Saxon
Dutch Low Saxon is a group of Low Saxon, i.e. West Low German dialects spoken in the northeastern Netherlands. In comparison, the remainder of the Netherlands speak a collection of Low Franconian dialects.The class "Dutch Low Saxon" is not unanimous...
. A reminder of the Frisian past is the Ommelanden flag which looks a lot like the Frisian provincial flag
Frisian Flag
The Frisian flag , is the official flag of the Dutch province of Friesland.It consists of four blue and three white diagonal stripes; in the white stripes are a total of seven red pompeblêden, stylised heart-shaped leaves of yellow water-lily...
but has more and narrower stripes and more red pompeblêden (stylised heart-shaped leaves of yellow water-lily
Nuphar lutea
Nuphar lutea is an aquatic plant of the family Nymphaeaceae, native to temperate regions of Europe, northwest Africa, and western Asia.-Growth:...
).

The area is made up of the following four quarters: Westerkwartier
Westerkwartier
The Westerkwartier is a historical region in the Dutch province of Groningen, at the border with the province of Friesland. In the past the area was part of the historical region of Frisia. The Frisian language is still spoken in the western parts of the area...
, Hunsingo, Fivel
Fivel
The Fivel was a historical river in the province of Groningen in The Netherlands. It received its water from peat bogs around Kolham and Slochteren, flowed past Woltersum, Wittewierum and Ten Post, and meandered north of Winneweer. The Fivel debouched inte a wide estuary of the Wadden Sea...
ingo with Oldambt
Oldambt
Oldambt is a municipality in the Dutch province of Groningen formed on January 1, 2010, by a fusion of the municipalities Reiderland, Scheemda and Winschoten....
, and Westerwolde
Westerwolde
Westerwolde is a region in the province Groningen in the north of the Netherlands. The region is located in the most eastern part of the Netherlands, alongside the German border. It is situated around the rivers Mussel Aa, Ruiten Aa, and Westerwoldse Aa, and it contains the villages Bellingwolde,...
.