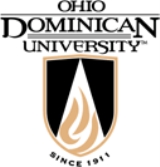 Encyclopedia
Ohio Dominican University is a private
Private college
Private college may refer to:*Private school*Private university...
four-year liberal arts
Liberal arts
The term liberal arts refers to those subjects which in classical antiquity were considered essential for a free citizen to study. Grammar, Rhetoric and Logic were the core liberal arts. In medieval times these subjects were extended to include mathematics, geometry, music and astronomy...
institution, founded in 1911 in the Catholic
Catholic
The word catholic comes from the Greek phrase , meaning "on the whole," "according to the whole" or "in general", and is a combination of the Greek words meaning "about" and meaning "whole"...
and Dominican traditions. The main campus spans over 72 acres (291,373.9 m²) in the North Central neighborhood of Columbus, Ohio
Columbus, Ohio
Columbus is the capital of and the largest city in the U.S. state of Ohio. The broader metropolitan area encompasses several counties and is the third largest in Ohio behind those of Cleveland and Cincinnati. Columbus is the third largest city in the American Midwest, and the fifteenth largest city...
, United States
United States
The United States of America is a federal constitutional republic comprising fifty states and a federal district...
. The university has just over 3,100 students and offers undergraduate degrees in over 50 majors as well as six graduate degree programs. Ohio Dominican uses a student-centered approach, with a commitment to quality teaching and learning and a number of academic programs of distinction.

Ohio Dominican University is a private Catholic liberal arts university, guided in its educational mission by the Dominican motto, "To contemplate truth and to share with others the fruits of this contemplation."

The University is significantly expanding the level of on-campus student extracurricular activities and improving residential life. At the same time, Ohio Dominican has expanded its extracurricular offerings, providing a greater number of on-campus activities for residential students. A central focus has been the expansion of athletic programs, which attract student athletes and non-athletes alike, foster alumni participation, and enhance fundraising.