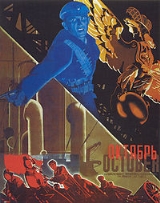 Encyclopedia
October: Ten Days That Shook the World is a Soviet
Soviet Union
The Soviet Union , officially the Union of Soviet Socialist Republics , was a constitutionally socialist state that existed in Eurasia between 1922 and 1991....
silent film
Silent film
A silent film is a film with no synchronized recorded sound, especially with no spoken dialogue. In silent films for entertainment the dialogue is transmitted through muted gestures, pantomime and title cards...
premiered in 1928 by Sergei Eisenstein
Sergei Eisenstein
Sergei Mikhailovich Eisenstein , né Eizenshtein, was a pioneering Soviet Russian film director and film theorist, often considered to be the "Father of Montage"...
, sometimes referred to simply as October in English. It is a celebratory dramatization of the 1917 October Revolution
October Revolution
The October Revolution , also known as the Great October Socialist Revolution , Red October, the October Uprising or the Bolshevik Revolution, was a political revolution and a part of the Russian Revolution of 1917...
. The title is taken from John Reed's book on the Revolution, Ten Days That Shook The World
Ten Days that Shook the World
Ten Days that Shook the World is a book by American journalist and socialist John Reed about the October Revolution in Russia in 1917 which Reed experienced firsthand. Reed followed many of the prominent Bolshevik leaders, especially Grigory Zinoviev and Karl Radek, closely during his time in Russia...
.

October was one of two films commissioned by the Soviet government to honour the tenth anniversary of the October Revolution (the other was Vsevolod Pudovkin
Vsevolod Pudovkin
Vsevolod Illarionovich Pudovkin was a Russian and Soviet film director, screenwriter and actor who developed influential theories of montage...
's The End of St. Petersburg
The End of St. Petersburg
The End of St. Petersburg is a 1927 silent film directed by Vsevolod Pudovkin and produced by Mezhrabpom. Commissioned to commemorate the tenth anniversary of the October Revolution, The End of St Petersburg was to be Pudovkin's most famous film and secured his place as one of the foremost Soviet...
). Eisenstein was chosen to head the project due to the international success he had achieved with The Battleship Potemkin
The Battleship Potemkin
The Battleship Potemkin , sometimes rendered as The Battleship Potyomkin, is a 1925 silent film directed by Sergei Eisenstein and produced by Mosfilm...
in 1925 . Nikolai Podvoisky
Nikolai Podvoisky
Nikolai Ilyich Podvoisky was a Russian revolutionary. He played a large role in the Russian Revolution of 1917 and wrote many articles for the Soviet newspaper Krasnaya Gazeta...
, one of the troika who led the storming of the Winter Palace
Winter Palace
The Winter Palace in Saint Petersburg, Russia, was, from 1732 to 1917, the official residence of the Russian monarchs. Situated between the Palace Embankment and the Palace Square, adjacent to the site of Peter the Great's original Winter Palace, the present and fourth Winter Palace was built and...
was responsible for the commission. The scene of the storming was based more on the 1920 re-enactment involving Lenin
Vladimir Lenin
Vladimir Ilyich Lenin was a Russian Marxist revolutionary and communist politician who led the October Revolution of 1917. As leader of the Bolsheviks, he headed the Soviet state during its initial years , as it fought to establish control of Russia in the Russian Civil War and worked to create a...
and thousands of Red Guards, witnessed by 100,000 spectators, than the original occasion, which was far less photogenic. This scene is notable because it became the legitimate, historical depiction of the storming of the Winter Palace owing to the lack of print or film documenting the actual event, which led historians and filmmakers to use Eisenstein's recreation. This illustrates October's success as a propaganda film.

Eisenstein used the film to further develop his theories of film structure, using a concept he described as "intellectual montage", the editing together of shots of apparently unconnected objects in order to create and encourage intellectual comparisons between them. One of the film's most celebrated examples of this technique is a baroque
Baroque
The Baroque is a period and the style that used exaggerated motion and clear, easily interpreted detail to produce drama, tension, exuberance, and grandeur in sculpture, painting, literature, dance, and music...
image of Jesus
Jesus
Jesus of Nazareth , commonly referred to as Jesus Christ or simply as Jesus or Christ, is the central figure of Christianity...
that is compared, through a series of shots, to Hindu deities
Hindu deities
Within Hinduism a large number of personal gods are worshipped as murtis. These beings are either aspects of the supreme Brahman, Avatars of the supreme being, or significantly powerful entities known as devas. The exact nature of belief in regards to each deity varies between differing Hindu...
, the Buddha
Gautama Buddha
Siddhārtha Gautama was a spiritual teacher from the Indian subcontinent, on whose teachings Buddhism was founded. In most Buddhist traditions, he is regarded as the Supreme Buddha Siddhārtha Gautama (Sanskrit: सिद्धार्थ गौतम; Pali: Siddhattha Gotama) was a spiritual teacher from the Indian...
, Aztec gods, and finally a primitive idol in order to suggest the sameness of all religions; the idol is then compared with military regalia to suggest the linking of patriotism
Patriotism
Patriotism is a devotion to one's country, excluding differences caused by the dependencies of the term's meaning upon context, geography and philosophy...
and religious fervour by the state. In another sequence Alexander Kerensky
Alexander Kerensky
Alexander Fyodorovich Kerensky was a major political leader before and during the Russian Revolutions of 1917.Kerensky served as the second Prime Minister of the Russian Provisional Government until Vladimir Lenin was elected by the All-Russian Congress of Soviets following the October Revolution...
, head of the pre-Bolshevik revolutionary Provisional Government, is compared to a preening mechanical peacock
Peafowl
Peafowl are two Asiatic species of flying birds in the genus Pavo of the pheasant family, Phasianidae, best known for the male's extravagant eye-spotted tail, which it displays as part of courtship. The male is called a peacock, the female a peahen, and the offspring peachicks. The adult female...
.

In 1966, Dimitri Shostakovich wrote a new soundtrack for the film, which later appeared as a tone poem 'October' Op.131 where Shostakovich's famous 'Partisan' theme makes an appearance. This soundtrack is the one used on most DVD releases of the film. 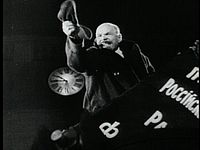 The film was not as successful or influential as Potemkin.
Eisenstein's montage experiments met with official disapproval; the authorities complained that October was unintelligible to the masses, and Eisenstein was attacked—for neither the first time nor the last—for excessive "formalism
Formalism (art)
In art theory, formalism is the concept that a work's artistic value is entirely determined by its form--the way it is made, its purely visual aspects, and its medium. Formalism emphasizes compositional elements such as color, line, shape and texture rather than realism, context, and content...
". He was also required to re-edit the work to expurgate references to Trotsky, who had recently been purged by Stalin
Joseph Stalin
Joseph Vissarionovich Stalin was the Premier of the Soviet Union from 6 May 1941 to 5 March 1953. He was among the Bolshevik revolutionaries who brought about the October Revolution and had held the position of first General Secretary of the Communist Party of the Soviet Union's Central Committee...
.

In spite of the film's lack of popular acceptance, film historians consider it to be an immensely rich experience—a sweeping historical epic of vast scale, and a powerful testament to Eisenstein's creativity and artistry. Vsevolod Pudovkin
Vsevolod Pudovkin
Vsevolod Illarionovich Pudovkin was a Russian and Soviet film director, screenwriter and actor who developed influential theories of montage...
, after viewing the film, remarked, "How I should like to make such a powerful failure."