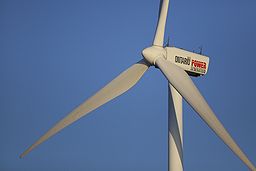 The OPG 7 Gomberg Turbine is a Vestas
Vestas
Vestas Wind Systems A/S is a Danish manufacturer, seller, installer, and servicer of wind turbines. It is the largest in the world, but due to very rapid growth of its competitors, its market share decreased from 28% in 2007 to 12.5% in 2009...
model V80-1.8MW wind turbine
Wind turbine
A wind turbine is a device that converts kinetic energy from the wind into mechanical energy. If the mechanical energy is used to produce electricity, the device may be called a wind generator or wind charger. If the mechanical energy is used to drive machinery, such as for grinding grain or...
in Pickering, Ontario
Pickering, Ontario
Pickering is a city located in Southern Ontario, Canada immediately east of Toronto in Durham Region. It is part of the Greater Toronto Area, the largest metropolitan area in Canada.- Early Period :...
. At the time of its construction, it was one of the largest wind turbines in North America, a 117-metre high wind machine commissioned in 2001 and designed to produce enough power to satisfy about 600 average households a year. This electricity is also emission-free
Environmental effects of wind power
Compared to the environmental impact of traditional energy sources, the environmental impact of wind power is relatively minor. Wind power consumes no fuel, and emits no air pollution, unlike fossil fuel power sources. The energy consumed to manufacture and transport the materials used to build a...
.

The commercial wind power industry has introduced steadily larger wind turbines to improve efficiency and the energy returned on energy invested
EROEI
In physics, energy economics and ecological energetics, energy returned on energy invested ; or energy return on investment , is the ratio of the amount of usable energy acquired from a particular energy resource to the amount of energy expended to obtain that energy resource...
. By 2008, the OPG 7 was no longer an unusually large wind turbine, with many new wind farms installing units of 3MW capacity and larger. However, the wind turbine remains the only unit in the world to be directly on the site of a nuclear power plant.

The Pickering Wind Generating Station (GS) produced an average of about 2900 megawatt/hours (MW/h) of electricity a year from 2001 to 2005. It generated about 18% of the electricity it would have if it had operated 24 hours a day for 365 days a year. This 18% capacity factor
Capacity factor
The net capacity factor or load factor of a power plant is the ratio of the actual output of a power plant over a period of time and its potential output if it had operated at full nameplate capacity the entire time...
is low compared to other forms of generation, and is low compared to most commercial wind farm
Wind farm
A wind farm is a group of wind turbines in the same location used to produce electric power. A large wind farm may consist of several hundred individual wind turbines, and cover an extended area of hundreds of square miles, but the land between the turbines may be used for agricultural or other...
s in North America. The low capacity factor results mainly from the lack of constant strong winds at the Pickering site, the wind shadow effect of nearby large buildings, and the high maintenance required for a prototype unit. The relatively low capacity factor is typical for wind turbines sited primarily as demonstration units. Other areas in Ontario have superior wind resources.

The wind turbine typically produces enough electricity to supply the annual electricity needs of about 330 average homes. At full power, it can supply about 1,800 homes at any given time. In comparison, any one of the six operating reactors at Pickering Nuclear Generating Station
Pickering Nuclear Generating Station
Pickering Nuclear Generating Station is a Canadian nuclear power station located on the north shore of Lake Ontario in Pickering, Ontario. The facility derives its name from the City of Pickering in which it is located....
can supply enough electricity for over 500,000 homes. To rival the output of a nuclear plant, many wind turbines must be installed together into a large wind farm
Wind farm
A wind farm is a group of wind turbines in the same location used to produce electric power. A large wind farm may consist of several hundred individual wind turbines, and cover an extended area of hundreds of square miles, but the land between the turbines may be used for agricultural or other...
.

About 50 truckloads of concrete totalling some 318 tonnes form the steel-reinforced tower base. The wind turbine components (blades, hub, nacelle, tower sections) traveled from the Vestas
Vestas
Vestas Wind Systems A/S is a Danish manufacturer, seller, installer, and servicer of wind turbines. It is the largest in the world, but due to very rapid growth of its competitors, its market share decreased from 28% in 2007 to 12.5% in 2009...
manufacturing plant in Denmark. A barge delivered the components to Oshawa
Oshawa
Oshawa is a city in Ontario, Canada, on the Lake Ontario shoreline. It lies in Southern Ontario approximately 60 kilometres east of downtown Toronto. It is commonly viewed as the eastern anchor of both the Greater Toronto Area and the Golden Horseshoe. It is now commonly referred to as the most...
, and trucks hauled them from there to the site. Power from the wind turbine travels on underground cables into the electrical grid system.

The amount of electricity produced by the wind turbine depends on the strength and quality of the winds at any given time. The wind speed at which this turbine begins to generate electricity (its cut-in speed) is about 16.9 km/h (10.5 mph). When operating, the blades turn at a constant speed of 15.7 revolutions per minute. If the wind speed is more than 90 km/h (56 mph), on-board computers stop the turbine to avoid damage to it.

Technicians can access the generator atop the tower by climbing a ladder inside the hollow tower. Because of this difficult access, public tours of the wind turbine are not permitted. However, the turbine features prominently in the corporation's public relations campaigns, and there are occasional guided tours.

Ontario Power Generation's Evergreen Energy control room in North Bay
North Bay, Ontario
North Bay is a city in Northeastern Ontario, Canada. It is the seat of Nipissing District, and takes its name from its position on the shore of Lake Nipissing.-History:...
monitors the wind turbine's operation 24 hours per day, 7 days a week.