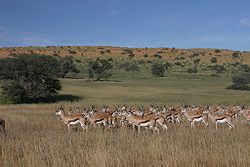 The Nossob River (≠nuse !ab, Khoikhoi
Khoikhoi
The Khoikhoi or Khoi, in standardised Khoekhoe/Nama orthography spelled Khoekhoe, are a historical division of the Khoisan ethnic group, the native people of southwestern Africa, closely related to the Bushmen . They had lived in southern Africa since the 5th century AD...
for black river) is a dry river bed in eastern Namibia and the Kalahari region of South Africa and Botswana. It covers a distance of 740km and last flooded in 1989. The river also lends its name to Nossob camp 25°25′18"S 20°35′47"E in the Kgalagadi Transfrontier Park
Kgalagadi Transfrontier Park
Kgalagadi Transfrontier Park is a large wildlife preserve and conservation area in southern Africa. The park straddles the border between South Africa and Botswana and comprises two adjoining national parks: Kalahari Gemsbok National Park in South Africa and Gemsbok National Park in Botswana. The...
.

The Nossob has its origin in two main tributaries
Tributary
A tributary or affluent is a stream or river that flows into a main stem river or a lake. A tributary does not flow directly into a sea or ocean...
, the Swart-Nossob and Wit-Nossob, meaning black and white respectively. Both tributaries have their origins in the eastern slopes of the Otjihavera mountain range, east of Windhoek
Windhoek
Windhoek is the capital and largest city of the Republic of Namibia. It is located in central Namibia in the Khomas Highland plateau area, at around above sea level. The 2001 census determined Windhoek's population was 233,529...
. Their sources are at 1,800m and over 2,000m above sea level
Sea level
Mean sea level is a measure of the average height of the ocean's surface ; used as a standard in reckoning land elevation...
respectively. The two river beds have their confluence
Confluence (geography)
In geography, a confluence is the meeting of two or more bodies of water. It usually refers to the point where two streams flow together, merging into a single stream...
some 80km south of Gobabis
Gobabis
Gobabis is a town in eastern Namibia. It is the regional capital of the Omaheke Region, and the district capital of the Gobabis electoral constituency. Gobabis is situated down the B6 motorway from Windhoek to Botswana. The town is from the Buitepos border post with Botswana, and serves as an...
, which is situated on the bank of the Swart-Nossob.

In the Kalahari
Kalahari Desert
The Kalahari Desert is a large semi-arid sandy savannah in Southern Africa extending , covering much of Botswana and parts of Namibia and South Africa, as semi-desert, with huge tracts of excellent grazing after good rains. The Kalahari supports more animals and plants than a true desert...
, the Nossob is said to flow about once a century. However, water does flow underground to provide life for grass and camelthorn trees
Acacia erioloba
Acacia erioloba is also commonly known as the Camel Thorn, Kameeldoring , Giraffe Thorn or Mokala . The Mokala National Park in the Northern Cape is named after this tree. The type specimen of Acacia giraffae, proved on closer examination to be a hybrid of A. haematoxylon and the species which...
growing in the river bed. The Nossob may flow briefly after large thunderstorms, causing wildlife to flock to the river.

The Nossob ends at a confluence with the Molopo River
Molopo River
The Molopo River is located in southern Africa. The river generally flows to the southwest from its source, and has a length of approximately 960 kilometres. River flow is intermittent. When in flood, the flow discharges into the Orange River, which it meets downstream of Augrabies Falls National...
some 50km south of Twee Rivieren
Twee Rivieren
Twee Rivieren is a small residential suburb in George, South Africa. It is located in the northern area of the city between Denneoord to the north and Bo-Dorp to the south. "Twee Rivieren" is an Afrikaans name, meaning "Two Rivers" in English...
. The confluence at 26°54′15"S 20°41′24"E is still 890m above sea level
Sea level
Mean sea level is a measure of the average height of the ocean's surface ; used as a standard in reckoning land elevation...
. The Molopo is in turn a tributary of the Orange River
Orange River
The Orange River , Gariep River, Groote River or Senqu River is the longest river in South Africa. It rises in the Drakensberg mountains in Lesotho, flowing westwards through South Africa to the Atlantic Ocean...
, which it meets downstream of Augrabies Falls.
The source of this article is wikipedia, the free encyclopedia.  The text of this article is licensed under the GFDL.