Encyclopedia
A general election to the Storting, the parliament of Norway
Norway
Norway , officially the Kingdom of Norway, is a Nordic unitary constitutional monarchy whose territory comprises the western portion of the Scandinavian Peninsula, Jan Mayen, and the Arctic archipelago of Svalbard and Bouvet Island. Norway has a total area of and a population of about 4.9 million...
, was held on 11 September 1989. 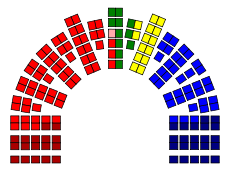 2 This seat was won by the party-list Framtid for Finnmark (Future For Finnmark), most often called the Aune list, after its leader Anders Aune, the winner of the seat. The list was mainly a protest movement, protesting against what many felt was a lack of effort by politicians to solve the many problems pertaining to Finnmark.
The source of this article is wikipedia, the free encyclopedia.  The text of this article is licensed under the GFDL.