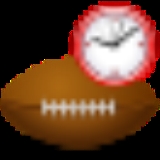 Though coach Hayden Fry
Hayden Fry
John Hayden Fry is a former American football player and coach. He served as the head coach at Southern Methodist University , North Texas State University, now the University of North Texas , and the University of Iowa , compiling a career college football record of 232–178–10...
left the school in 1978 with a 9-3 season, he also left it with a mounting athletics debts. The team was subsequently demoted to Division I-AA status by the NCAA. In 1982, the university recognized that the athletics program had a deficit of $1.6 million and voted to join the Southland Conference
Southland Conference
The Southland Conference is a college athletic conference which operates in the south central United States. It participates in the NCAA's Division I for all sports; for football, it participates in the Division I Football Championship Subdivision...
. The program experienced little success in subsequent years, but in 1995, a coordinated campaign by donors to purchase large blocks of seats at Fouts Field
Fouts Field
Fouts Field is the former stadium of the University of North Texas, located in Denton, Texas, United States. It was primarily used for football, and was the home field of the University of North Texas Eagles, also known as the Mean Green from 1952-2010...
spiked the average attendance enough for the school to enter Division I-A once again in 1995.

After the school joined the Sun Belt Conference
Sun Belt Conference
The Sun Belt Conference is a college athletic conference that has been affiliated with the NCAA's Division I since 1976. Its football teams participate in the Division I Football Bowl Subdivision , the higher of two levels of Division I football competition . The Sun Belt has member institutions...
in 2001, Darrell Dickey briefly revived fortunes in Denton, winning four straight conference championships. The team played in the 2001 New Orleans Bowl
2001 New Orleans Bowl
The 2001 New Orleans Bowl featured the and the . It was the inaugural playing of the game. North Texas became the first team in NCAA history to make a bowl game, after starting the season 0-5...
despite having a losing record. After he went 2-9 and 3-9 in his eighth and ninth seasons, the athletic department fired Dickey on November 8, 2006.

The school then hired Todd Dodge
Todd Dodge
Todd Dodge is an American football coach and former player. He is currently the quarterbacks coach at the University of Pittsburgh, a position he has held since January 2011. Dodge was the head football coach at the University of North Texas from 2007 to 2010...
, who had been offensive coordinator at UNT from 1991-1992, on December 12, 2006. Dodge had been one of the nation’s most successful high school football coaches, amassing a 98-11 record overall at Carroll High School in Southlake, Texas
Southlake, Texas
Southlake is a city in northeast Tarrant and southeast Denton counties, Texas. As of the 2010 census it had a population of 26,575. A suburb of Fort Worth and Dallas, Southlake is known for exemplary public schools, Southlake Town Square, and Carroll High School's 7-time state champion football...
, including a 79-1 record over his last 5 years. His teams at UNT struggled to win, however, compiling a 6-37 record overall and a 3-23 record in conference play. After a 1-6 start to the 2010 season, the school fired Dodge. He was replaced by offensive coordinator Mike Canales
Mike Canales
Mike Canales is an American college football coach.During the 2010 season at North Texas, he was promoted from offensive coordinator to interim head coach after the mid-season termination of his predecessor, Todd Dodge. UNT averaged 33.8 points a game after Canales took over as head coach, after...
as interim head coach. In 2011, the university hired Dan McCarney
Dan McCarney
-External links:* * * * *...
as head coach.

From 1952 to 2010, the team played its home games at Fouts Field
Fouts Field
Fouts Field is the former stadium of the University of North Texas, located in Denton, Texas, United States. It was primarily used for football, and was the home field of the University of North Texas Eagles, also known as the Mean Green from 1952-2010...
. The first game was a 55–0 win over the North Dakota Fighting Sioux
North Dakota Fighting Sioux football
The North Dakota Fighting Sioux are a college football program that competes in the Great West Conference in the NCAA Division I's Football Championship Subdivision...
in 1952. The final Mean Green game was a 41–49 loss to the Kansas State Wildcats
Kansas State Wildcats football
The Kansas State Wildcats football program is the intercollegiate football program of the Kansas State University Wildcats. The program is classified in the NCAA's Division I Bowl Subdivision, and the team competes in the Big 12 Conference...
in 2010. The Mean Green posted a final record at Fouts Field of 155–100–7. From 1971 through 2001, the Mean Green played 21 home games at Texas Stadium
Texas Stadium
Texas Stadium was a football stadium in Irving, Texas, a suburb of Dallas. The stadium opened on September 17, 1971.Built to replace the aging Cotton Bowl, it was the home field of the NFL's Dallas Cowboys, and had a seating capacity of 65,675...
in Irving, Texas
Irving, Texas
Irving is a city located in the U.S. state of Texas within Dallas County. According to the 2010 U.S. Census, the city population was 216,290. Irving is within the Dallas–Plano–Irving metropolitan division of the Dallas–Fort Worth–Arlington metropolitan area, designated...
, 32 miles away from the university's campus in Denton. The Mean Green posted a 9-12 record while playing select home games at the off-campus stadium. Only one season, 1972, saw the Mean Green play more games at Texas Stadium than their home field in Denton.