Encyclopedia
No. 651 Squadron RAF was a unit of the Royal Air Force
Royal Air Force
The Royal Air Force is the aerial warfare service branch of the British Armed Forces. Formed on 1 April 1918, it is the oldest independent air force in the world...
in Italy
Italy
Italy , officially the Italian Republic languages]] under the European Charter for Regional or Minority Languages. In each of these, Italy's official name is as follows:;;;;;;;;), is a unitary parliamentary republic in South-Central Europe. To the north it borders France, Switzerland, Austria and...
and North Africa
North Africa
North Africa or Northern Africa is the northernmost region of the African continent, linked by the Sahara to Sub-Saharan Africa. Geopolitically, the United Nations definition of Northern Africa includes eight countries or territories; Algeria, Egypt, Libya, Morocco, South Sudan, Sudan, Tunisia, and...
during the Second World War and afterwards in Egypt
Egypt
Egypt , officially the Arab Republic of Egypt, Arabic: , is a country mainly in North Africa, with the Sinai Peninsula forming a land bridge in Southwest Asia. Egypt is thus a transcontinental country, and a major power in Africa, the Mediterranean Basin, the Middle East and the Muslim world...
. Numbers 651 to 663 Squadrons of the RAF were Air Observation Post
Air Observation Post
An Air Observation Post is a British military aircraft used for active or passive observation of artillery actions.-History:Air Observation Post is the term used by the Royal Air Force and other services of the United Kingdom and Commonwealth air forces for an aeroplane or helicopter used in the...
units working closely with Army
British Army
The British Army is the land warfare branch of Her Majesty's Armed Forces in the United Kingdom. It came into being with the unification of the Kingdom of England and Scotland into the Kingdom of Great Britain in 1707. The new British Army incorporated Regiments that had already existed in England...
units in artillery spotting and liaison. A further three of these squadrons - Nos. 664, 665 and 666 - were RCAF AOP squadrons manned by Canadian and British personnel. Their duties and squadron numbers were transferred to the Army with the formation of the Army Air Corps on 1 September 1957.

No 651 Squadron was formed at RAF Old Sarum, Wiltshire
Wiltshire
Wiltshire is a ceremonial county in South West England. It is landlocked and borders the counties of Dorset, Somerset, Hampshire, Gloucestershire, Oxfordshire and Berkshire. It contains the unitary authority of Swindon and covers...
, on 1 August 1941. It went into action in November of that year, during Operation Torch
Operation Torch
Operation Torch was the British-American invasion of French North Africa in World War II during the North African Campaign, started on 8 November 1942....
in North Africa. It later served in Italy, North Africa, and finally Egypt
Egypt
Egypt , officially the Arab Republic of Egypt, Arabic: , is a country mainly in North Africa, with the Sinai Peninsula forming a land bridge in Southwest Asia. Egypt is thus a transcontinental country, and a major power in Africa, the Mediterranean Basin, the Middle East and the Muslim world...
from 1945 were it remained until 1 November 1955. On that same day, No. 657 Squadron RAF
No. 657 Squadron RAF
No. 657 Squadron RAF was a unit of the Royal Air Force in North Africa, Italy and the Netherlands during the Second World War and afterwards in Germany....
was re-numbered to 651 Squadron at RAF Middle Wallop, it now flew Sycamore helicopters
Bristol Sycamore
-See also:-External links:* on the Bristol Sycamore* on the Bristol Sycamore*...
as well as Austers. On 1 September 1957 the squadron was transferred to the Army Air Corps and became No. 651 Squadron AAC. The original squadron is represented today by 651 Squadron of the Joint Special Forces Aviation Wing
Joint Special Forces Aviation Wing
The Joint Special Forces Aviation Wing is a joint-service organisation which provides aviation support to United Kingdom Special Forces, using both fixed wing and rotary wing aircraft. The Wing is based at RAF Odiham....
. 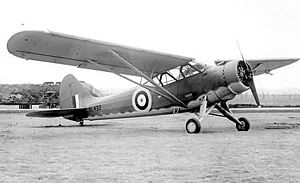