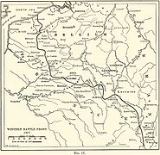 Encyclopedia
The Nivelle Offensive was a 1917 French attack on the Western Front
Western Front (World War I)
Following the outbreak of World War I in 1914, the German Army opened the Western Front by first invading Luxembourg and Belgium, then gaining military control of important industrial regions in France. The tide of the advance was dramatically turned with the Battle of the Marne...
in the First World War. Promised as the assault that would end the war within 48 hours, with casualties expected of around 10,000 men, it failed on both counts. It was a three-stage plan: 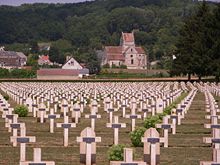 When Robert Nivelle
Robert Nivelle
Robert Georges Nivelle was a French artillery officer who served in the Boxer Rebellion, and the First World War. In May 1916, he was given command of the French Third Army in the Battle of Verdun, leading counter-offensives that rolled back the German forces in late 1916...
took over from Joseph Joffre
Joseph Joffre
Joseph Jacques Césaire Joffre OM was a French general during World War I. He is most known for regrouping the retreating allied armies to defeat the Germans at the strategically decisive First Battle of the Marne in 1914. His popularity led to his nickname Papa Joffre.-Biography:Joffre was born in...
as French Commander-in-Chief in December 1916 after the costly fighting at Verdun
Verdun
Verdun is a city in the Meuse department in Lorraine in north-eastern France. It is a sub-prefecture of the department.Verdun is the biggest city in Meuse, although the capital of the department is the slightly smaller city of Bar-le-Duc.- History :...
and the Somme
Somme
Somme is a department of France, located in the north of the country and named after the Somme river. It is part of the Picardy region of France....
, he argued that a massive onslaught on German
Germany
Germany , officially the Federal Republic of Germany , is a federal parliamentary republic in Europe. The country consists of 16 states while the capital and largest city is Berlin. Germany covers an area of 357,021 km2 and has a largely temperate seasonal climate...
lines would bring French
France
The French Republic , The French Republic , The French Republic , (commonly known as France , is a unitary semi-presidential republic in Western Europe with several overseas territories and islands located on other continents and in the Indian, Pacific, and Atlantic oceans. Metropolitan France...
victory in 48 hours. The plan was put into action on 16 April 1917 after support from France's Prime Minister, despite strong disapproval from other high-ranking officials.

The Nivelle offensive was a huge and costly undertaking, involving around 1.2 million troops and 7,000 artillery pieces
Artillery
Originally applied to any group of infantry primarily armed with projectile weapons, artillery has over time become limited in meaning to refer only to those engines of war that operate by projection of munitions far beyond the range of effect of personal weapons...
on a broad front between Roye
Roye, Somme
Roye is a commune in the Somme department in Picardie in northern France.-Geography:Roye is situated at the junction of the A1 autoroute and the N17 road, on the banks of the Avre, some southeast of Amiens.-Population:-History:...
and Reims
Reims
Reims , a city in the Champagne-Ardenne region of France, lies east-northeast of Paris. Founded by the Gauls, it became a major city during the period of the Roman Empire....
. Its main focus was a massive assault on the German positions along the Chemin des Dames
Chemin des Dames
In France, the Chemin des Dames is part of the D18 and runs east and west in the département of Aisne, between in the west, the Route Nationale 2, and in the east, the D1044 at Corbeny. It is some thirty kilometres long and runs along a ridge between the valleys of the rivers Aisne and Ailette...
ridge, in the Second Battle of the Aisne
Second Battle of the Aisne
The Second Battle of the Aisne , was the massive main assault of the French military's Nivelle Offensive or Chemin des Dames Offensive in 1917 during World War I....
, and an eventual linkup with other Allied forces. From the start, the plan, which had been in development since December 1916, was plagued by delays and information leaks. By the time it went into action in April 1917, the plans were well known to the German army, who took appropriate defensive measures.

The offensive started with a massive artillery bombardment. Following the bombardment, French infantry and tanks advanced on the German defenses. The unprotected infantry suffered heavy casualties, and French tanks were shot to pieces before they could have any effect. The French infantry managed to overpower the first line of trenches in fierce fighting, but were subsequently stopped on the plateau by intense fire from the new portable MG 08/15 machine-guns emplaced in unusually large numbers. Despite the huge losses, some gains were made mostly by the divisions led by general Mangin. However, the offensive was scaled back over the next two weeks. Progress was slow, but by May 5, a 4 kilometer stretch of the German defensive line had been captured. A final French assault was launched after May 5, but failed after four days of indecisive fighting, causing the offensive to be abandoned in disarray.

The offensive achieved very little in the way of territorial gain, nowhere near the 48-hour breakthrough envisaged. The French admitted to having suffered 96,000 casualties, but the true figure may have been twice as great; nearly 120,000 were suffered in the first five days. Most of the new French Schneider tanks were destroyed by artillery fire. The Germans admitted a loss of 163,000, but this almost certainly includes the 20,780 German prisoners claimed by the French. Meanwhile, British and Russian forces, in their attempts to link up with the French, had also lost heavily, with 160,000 British and 5,183 Russian casualties. In the aftermath of its end on 9 May 1917, Nivelle was sacked, ending his career.

The French had predicted 10,000 casualties, and as a result, French medical support collapsed. The massive losses sparked widespread mutiny
Mutiny
Mutiny is a conspiracy among members of a group of similarly situated individuals to openly oppose, change or overthrow an authority to which they are subject...
in the French army, including one famous incident where, as the offensive was winding down, the French 2nd Division arrived on the battlefield, drunk and without weapons.
The source of this article is wikipedia, the free encyclopedia.  The text of this article is licensed under the GFDL.