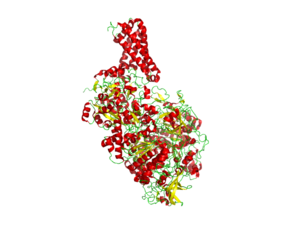 Nitrate reductases are molybdoenzymes that reduce
Redox
Redox reactions describe all chemical reactions in which atoms have their oxidation state changed....
nitrate
Nitrate
The nitrate ion is a polyatomic ion with the molecular formula NO and a molecular mass of 62.0049 g/mol. It is the conjugate base of nitric acid, consisting of one central nitrogen atom surrounded by three identically-bonded oxygen atoms in a trigonal planar arrangement. The nitrate ion carries a...
(NO) to nitrite
Nitrite
The nitrite ion has the chemical formula NO2−. The anion is symmetric with equal N-O bond lengths and a O-N-O bond angle of ca. 120°. On protonation the unstable weak acid nitrous acid is produced. Nitrite can be oxidised or reduced, with product somewhat dependent on the oxidizing/reducing agent...
(NO).

Nitrate molecule binds to the active site with the Mo ion in the +6 oxidation state. Electron transfer to the active site occurs only in the proton-electron transfer stage, where the MoV species plays an important role in catalysis. The presence of the sulfur atom in the molybdenum coordination sphere creates a pseudo-dithiolene ligand that protects it from any direct attack from the solvent. Upon the nitrate binding there is a conformational rearrangement of this ring that allows the direct contact of the nitrate with MoVI ion. This rearrangement is stabilized by the conserved methionines Met141 and Met308. The reduction of nitrate into nitrite occurs in the second step of the mechanism where the two dimethyl-dithiolene ligands have a key role in spreading the excess of negative charge near the Mo atom to make it available for the chemical reaction. The reaction involves the oxidation of the sulfur atoms and not of the molybdenum as previously suggested. The mechanism involves a molybdenum and sulfur-based redox chemistry instead of the currently accepted redox chemistry based only on the Mo ion. The second part of the mechanism involves two protonation steps that are promoted by the presence of MoV species. MoVI intermediates might also be present in this stage depending on the availability of protons and electrons. Once the water molecule is generated only the MoVI species allow water molecule dissociation, and, the concomitant enzymatic turnover.
The source of this article is wikipedia, the free encyclopedia.  The text of this article is licensed under the GFDL.