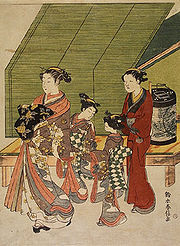 refers to Japanese multi-colored woodblock printing
Woodblock printing
Woodblock printing is a technique for printing text, images or patterns used widely throughout East Asia and originating in China in antiquity as a method of printing on textiles and later paper....
; this technique is used primarily in ukiyo-e
Ukiyo-e
' is a genre of Japanese woodblock prints and paintings produced between the 17th and the 20th centuries, featuring motifs of landscapes, tales from history, the theatre, and pleasure quarters...
. It was invented in the 1760s, and perfected and popularized by the printmaker Suzuki Harunobu
Suzuki Harunobu
was a Japanese woodblock print artist, one of the most famous in the Ukiyo-e style. He was an innovator, the first to produce full-color prints in 1765, rendering obsolete the former modes of two- and three-color prints. Harunobu used many special techniques, and depicted a wide variety of...
, who produced a great many nishiki-e prints between 1765 and his death five years later.

Previously, most prints had been in black-and-white, colored by hand, or colored with the addition of one or two color ink blocks. A nishiki-e print is created by carving a separate woodblock for every color, and using them in a stepwise fashion. An engraver by the name of Kinroku is credited with the technical innovations that allowed so many blocks of separate colors to fit perfectly onto the page where they ought to, relative to one another, in order to create a single complete image.

This style and technique is also known as , referring to Edo
Edo
, also romanized as Yedo or Yeddo, is the former name of the Japanese capital Tokyo, and was the seat of power for the Tokugawa shogunate which ruled Japan from 1603 to 1868...
, the capital city of the time.

In the Meiji period
Meiji period
The , also known as the Meiji era, is a Japanese era which extended from September 1868 through July 1912. This period represents the first half of the Empire of Japan.- Meiji Restoration and the emperor :...
, various nishiki-e illustrated new fashions, imported goods, events, the railroad, and other new topics. "Newspaper Nishiki-e" (新聞錦絵, shinbun nishiki-e) were very popular among the public during this period. Print designers created nishiki-e on topics picked up from the newspapers such as Tokyo Nichinichi shinbun or Yūbin Hochi shinbun.