Encyclopedia
Nipponzan Myōhōji founded in 1917 by Nichidatsu Fujii
Nichidatsu Fujii
Nichidatsu Fujii was a Japanese Buddhist monk, and founder of the Nipponzan-Myōhōji order of Buddhism. He is best known world-wide for his decision in 1947, to begin constructing Peace Pagodas in many locations around the world, as shrines to world peace.Fujii was born into a peasant family in the...
, is a new religious movement
Shinshukyo
is a Japanese term used to describe domestic new religious movements. They are also known as in Japanese, and are most often called simply Japanese new religions in English. Japanese theologians classify all religious organizations founded since the middle of the 19th century as Shinshūkyō. Thus,...
that emerged from the Nichiren sect
Nichiren Buddhism
Nichiren Buddhism is a branch of Mahāyāna Buddhism based on the teachings of the 13th century Japanese monk Nichiren...
of Japanese Buddhism.

The community reveres the Lotus-Sūtra
Lotus Sutra
The Lotus Sūtra is one of the most popular and influential Mahāyāna sūtras, and the basis on which the Tiantai and Nichiren sects of Buddhism were established.-Title:...
(jp: 法華経 Hokkekyō) as the highest expression of the Buddhist message. In addition, it is actively engaged worldwide in the peace movement
Peace movement
A peace movement is a social movement that seeks to achieve ideals such as the ending of a particular war , minimize inter-human violence in a particular place or type of situation, often linked to the goal of achieving world peace...
. It is the most pacifist group in Japan of seven religious movements surveyed by Robert Kisala. The main practise of Nichiren Buddhism is to chant the Daimoku Nam Myoho Renge Kyo. 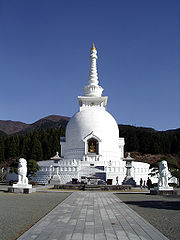 Nipponzan Myōhōji has Peace Pagoda
Peace Pagoda
A Peace Pagoda is a Buddhist stupa designed to provide a focus for people of all races and creeds, and to help unite them in their search for world peace. Most have been built under the guidance of Nichidatsu Fujii , a Buddhist monk from Japan and founder of the Nipponzan-Myōhōji Buddhist Order...
s (Stupa
Stupa
A stupa is a mound-like structure containing Buddhist relics, typically the remains of Buddha, used by Buddhists as a place of worship....
s) in locations around the world. It has had peace pilgrimages undertaken by its followers. One of the most prominent of these was the 1994-1995 pilgrimage from Auschwitz to Hiroshima
Hiroshima
is the capital of Hiroshima Prefecture, and the largest city in the Chūgoku region of western Honshu, the largest island of Japan. It became best known as the first city in history to be destroyed by a nuclear weapon when the United States Army Air Forces dropped an atomic bomb on it at 8:15 A.M...
by way of Bosnia, Iraq
Iraq
Iraq ; officially the Republic of Iraq is a country in Western Asia spanning most of the northwestern end of the Zagros mountain range, the eastern part of the Syrian Desert and the northern part of the Arabian Desert....
, Cambodia
Cambodia
Cambodia , officially known as the Kingdom of Cambodia, is a country located in the southern portion of the Indochina Peninsula in Southeast Asia...
and other countries then experiencing the effects of war. That pilgrimage was known as The Interfaith Pilgrimage for Peace and Life.