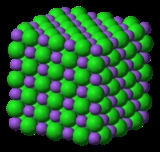 Encyclopedia
Nickel oxide is the chemical compound
Chemical compound
A chemical compound is a pure chemical substance consisting of two or more different chemical elements that can be separated into simpler substances by chemical reactions. Chemical compounds have a unique and defined chemical structure; they consist of a fixed ratio of atoms that are held together...
with the formula Ni
Nickel
Nickel is a chemical element with the chemical symbol Ni and atomic number 28. It is a silvery-white lustrous metal with a slight golden tinge. Nickel belongs to the transition metals and is hard and ductile...
O
Oxygen
Oxygen is the element with atomic number 8 and represented by the symbol O. Its name derives from the Greek roots ὀξύς and -γενής , because at the time of naming, it was mistakenly thought that all acids required oxygen in their composition...
. It is notable as being the only well characterized oxide of nickel (although nickel(III) oxide
Nickel(III) oxide
Nickel oxide has been referred to in the literature but is not a well characterised compound. The substance black nickel oxide is sometimes described as being Ni2O3 however the composition quoted by suppliers has a nickel content of around 77% by weight whereas Ni2O3 would have 70.98% Ni by...
, Ni2O3 and NiO2 have been claimed). The mineralogical form of NiO, bunsenite, is very rare. It is classified as a basic metal oxide. Several million kilograms are produced in varying quality annually, mainly as an intermediate in the production of nickel alloys.

NiO can be prepared by multiple methods. Upon heating above 400 °C, nickel powder reacts with oxygen to give NiO. In some commercial processes, green nickel oxide is made by heating a mixture of nickel powder and water at 1000 °C, the rate for this reaction can be increased by the addition of NiO. The simplest and most successful method of preparation is through pyrolysis of a nickel(II) compounds such as the hydroxide, nitrate, and carbonate, which yield a light green powder. Synthesis from the elements by heating the metal in oxygen can yield grey to black powders which indicates nonstoichiometry
Non-stoichiometric compound
Non-stoichiometric compounds are chemical compounds with an elemental composition that cannot be represented by a ratio of well-defined natural numbers, and therefore violate the law of definite proportions. Often, they are solids that contain crystallographic point defects, such as interstitial...
.

NiO adopts the NaCl structure, with octahedral Ni(II) and O2− sites. The conceptually simple structure is commonly known as the rock salt structure. Like many other binary metal oxides, NiO is often non-stoichiometric, meaning that the Ni:O ratio deviates from 1:1. In nickel oxide this non-stoichiometry is accompanied by a color change, with the stoichiometrically correct NiO being green and the non-stoichiometric NiO being black.

NiO has a variety of specialized applications and generally applications distinguish between "chemical", which is relatively pure material for specialty applications, and "metallurgical grade", which is mainly used for the production of alloys. It is used in the ceramic industry to make frits, ferrites, and porcelain glazes. The sintered oxide is used to produce nickel steel alloys. Charles Édouard Guillaume
Charles Edouard Guillaume
Charles Édouard Guillaume was a Swiss physicist who received the Nobel Prize in Physics in 1920 in recognition of the service he had rendered to precision measurements in physics by his discovery of anomalies in nickel steel alloys.Guillaume is known for his discovery of nickel-steel alloys he...
won the 1920 Nobel Prize in Physics
Nobel Prize in Physics
The Nobel Prize in Physics is awarded once a year by the Royal Swedish Academy of Sciences. It is one of the five Nobel Prizes established by the will of Alfred Nobel in 1895 and awarded since 1901; the others are the Nobel Prize in Chemistry, Nobel Prize in Literature, Nobel Peace Prize, and...
for his work on nickel steel alloys which he called invar
Invar
Invar, also known generically as FeNi36 , is a nickel steel alloy notable for its uniquely low coefficient of thermal expansion . The name, Invar, comes from the word invariable, referring to its lack of expansion or contraction with temperature changes.It was invented in 1896 by Swiss scientist...
and elinvar
Elinvar
Elinvar is a nickel steel alloy with a modulus of elasticity which does not change much with temperature changes. The name is a contraction of the French elasticité invariable. It was invented in the late 1890s by Charles Édouard Guillaume, a Swiss physicist who also invented Invar, another...
.

NiO was also a component in the Nickel-iron battery
Nickel-iron battery
The nickel–iron battery is a storage battery having a nickel oxide-hydroxide cathode and an iron anode, with an electrolyte of potassium hydroxide. The active materials are held in nickel-plated steel tubes or perforated pockets...
, also known as the Edison Battery, and is a component in fuel cells. It is the precursor to many nickel salts, for use as specialty chemicals and catalysts. More recently, NiO was used to make the NiCd rechargeable batteries found in many electronic devices until the development of the environmentally superior Lithium Ion battery.

About 4000 tons of chemical grade NiO are produced annually. Black NiO is the precursor to nickel salts, which arise by treatment with mineral acids. NiO is a versatile hydrogenation catalyst.

Heating nickel oxide with either hydrogen, carbon, or carbon monoxide reduces it to metallic nickel. It combines with the oxides of sodium and potassium at high temperatures (>700°C) to form the corresponding nickelate.

Long-term inhalation of NiO is damaging to the lungs, causing lesions and in some cases cancer.