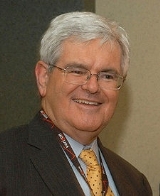 An author and historian, Gingrich twice ran unsuccessfully for the House
United States House of Representatives
The United States House of Representatives is one of the two Houses of the United States Congress, the bicameral legislature which also includes the Senate.The composition and powers of the House are established in Article One of the Constitution...
in the 1970s during the eight years he was teaching history in college. On his third try, he won a seat (R-Georgia
Georgia (U.S. state)
Georgia is a state located in the southeastern United States. It was established in 1732, the last of the original Thirteen Colonies. The state is named after King George II of Great Britain. Georgia was the fourth state to ratify the United States Constitution, on January 2, 1788...
) in the election of November 1978 and was subsequently re-elected ten times.

I'm not studying this, I'm not looking at it in great detail, but the last guy to announce on your show came in fourth.

Response to Jon Stewart's request that he announce his candidacy for President of the United States in the 2008 election on The Daily Show (June 6, 2005)
More
x