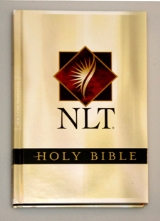 Encyclopedia
The New Living Translation (NLT) is a translation
Bible translations
The Bible has been translated into many languages from the biblical languages of Hebrew, Aramaic and Greek. Indeed, the full Bible has been translated into over 450 languages, although sections of the Bible have been translated into over 2,000 languages....
of the Bible
Bible
The Bible refers to any one of the collections of the primary religious texts of Judaism and Christianity. There is no common version of the Bible, as the individual books , their contents and their order vary among denominations...
into modern English
Modern English
Modern English is the form of the English language spoken since the Great Vowel Shift in England, completed in roughly 1550.Despite some differences in vocabulary, texts from the early 17th century, such as the works of William Shakespeare and the King James Bible, are considered to be in Modern...
. Originally starting out as an effort to revise The Living Bible
The Living Bible
The Living Bible is an English version of the Bible created by Kenneth N. Taylor. It was first published in 1971. Unlike most English Bibles, The Living Bible is a paraphrase. Mr...
, the project evolved into a new English translation from Hebrew and Greek texts. Some stylistic influences of The Living Bible remained in the first edition (1996), but these are less evident in the second edition (2004, 2007).

The New Living Translation used translators from a variety of denominations. The methodology combined an attempt to translate the original texts simply and literally with a dynamic equivalence synergy approach used to convey the thoughts behind the text where a literal translation may have been difficult to understand or even misleading to modern readers.
It has been suggested that this "thought-for-thought" methodology, while making the translation easier to understand, is less accurate than a literal (formal equivalence) method, and thus the New Living Translation may not be suitable for those wishing to undertake detailed study of the Bible.

The Old Testament translation was based on the Masoretic Text
Masoretic Text
The Masoretic Text is the authoritative Hebrew text of the Jewish Bible and is regarded as Judaism's official version of the Tanakh. While the Masoretic Text defines the books of the Jewish canon, it also defines the precise letter-text of these biblical books, with their vocalization and...
(Biblia Hebraica Stuttgartensia
Biblia Hebraica Stuttgartensia
The Biblia Hebraica Stuttgartensia, or ', is an edition of the Masoretic Text of the Hebrew Bible as preserved in the Leningrad Codex, and supplemented by masoretic and text-critical notes...
) and was further compared to other sources such as the Dead Sea Scrolls
Dead Sea scrolls
The Dead Sea Scrolls are a collection of 972 texts from the Hebrew Bible and extra-biblical documents found between 1947 and 1956 on the northwest shore of the Dead Sea, from which they derive their name...
, Septuagint, Greek manuscripts, Samaritan Pentateuch
Samaritan Pentateuch
The Samaritan Pentateuch, sometimes called Samaritan Torah, , is a version of the Hebrew language Pentateuch, the first five books of the Bible, used by the Samaritans....
, Syriac Peshitta, and Latin Vulgate. The New Testament translation was based on the two standard editions of the Greek New Testament (the UBS 4th revised edition and the Nestle-Aland Novum Testamentum Graece
Novum Testamentum Graece
Novum Testamentum Graece is the Latin name editions of the original Greek-language version of the New Testament.The first printed edition was the Complutensian Polyglot Bible by Cardinal Francisco Jiménez de Cisneros, printed in 1514, but not published until 1520...
27th edition).

Work on this revision began in 1989 with ninety translators and published in 1996. Soon after that, a new revision was begun and The Second Edition of the NLT (also called the NLTse) was released in 2004. A revision in 2007 comprised mostly minor textual or footnote changes.

The New Living Translation is meant to be easily accessible to readers of modern English. As part of this effort:

In July, 2011 the NLT held 3rd place in Bible sales based upon dollar sales and 2nd place based on unit sales according to the Christian Booksellers Association. In July, 2008, the NLT gained the #1 spot in unit sales, unseating the NIV for the first time in over two decades.

There is a Roman Catholic edition of the NLT with the Deuterocanon, but this edition has not been granted an imprimatur
Imprimatur
An imprimatur is, in the proper sense, a declaration authorizing publication of a book. The term is also applied loosely to any mark of approval or endorsement.-Catholic Church:...
by Catholic authorities, and so the NLT is not officially approved by the Roman Catholic Church for either private study or use in church services.