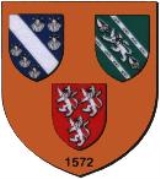 Encyclopedia
Netherthorpe School is a secondary school
Secondary school
Secondary school is a term used to describe an educational institution where the final stage of schooling, known as secondary education and usually compulsory up to a specified age, takes place...
designated science college status that is based in the town of Staveley
Staveley, Derbyshire
Staveley is a town within the borough of Chesterfield, in Derbyshire, England. The town is situated alongside the River Rother, adjacent to Eckington to the north, Barlborough to the east, Sutton-cum-Duckmanton civil parish to the south and Brimington to the west.-History:It has traditionally been...
in the Chesterfield district of Derbyshire
Derbyshire
Derbyshire is a county in the East Midlands of England. A substantial portion of the Peak District National Park lies within Derbyshire. The northern part of Derbyshire overlaps with the Pennines, a famous chain of hills and mountains. The county contains within its boundary of approx...
.

The school was founded in 1572


Netherthorpe School.—Francis Rodes
Francis Rodes
Sir Francis Rodes was an English judge, the son of John Rodes of Staveley, Derbyshire, by his first wife, Attelina Hewett of the West Riding of Yorkshire...
, by will, 29th of Elizabeth, left a yearly rent charge of £20 per annum, to be taken forth of his manor of Elmton
Elmton
Elmton is a linear village. It is located in the parish of Elmton-with-Creswell in the Bolsover district of Derbyshire approximately equidistant between Bolsover Castle and Creswell Crags.- History :...
; £8 thereof to the Grammar school, at Staveley Netherthorpe, £8 for two scholarships in St. John's, Cambridge, and £4 for the relief of soldiers who should be sent to the wars out of Staveley
Staveley, Derbyshire
Staveley is a town within the borough of Chesterfield, in Derbyshire, England. The town is situated alongside the River Rother, adjacent to Eckington to the north, Barlborough to the east, Sutton-cum-Duckmanton civil parish to the south and Brimington to the west.-History:It has traditionally been...
, Barlborough
Barlborough
Barlborough is a village and civil parish in the Bolsover district of Derbyshire, England. According to the 2001 census it had a population of 3,018. The village is near junction 30 of the M1 motorway and is about five miles north of Bolsover...
, and Elmton. Robert Sitwell, by will, 41st Elizabeth, gave a messuage in Killamarsh
Killamarsh
Killamarsh is a town in North East Derbyshire. It borders South Yorkshire to its north and west. It lies between Halfway and Mosborough to the west, Renishaw to the south, Beighton and Sothall to the northwest, Wales to the northeast, Harthill to its east and the Rother Valley Country Park to its...
, on trust, to pay £6 yearly to the schoolmaster. Lord James Cavendish, 1742, left a rent charge of £6, issuing out of closes at Hollingwood
Hollingwood
Hollingwood is a small village approximately four miles north east of Chesterfield, Derbyshire, England.Hollingwood and Barrow Hill were built in c1900 when the Staveley Coal and Iron Company formed and built the for their workers. It is alleged that Hollingwood was the first village in the country...
, for the maintenance of the schoolmaster. In addition to these, the Rev. Francis Gisborne gave £10, to be invested in stock. The income of the various benefactions amounts to £29 per annum. All the sons of parishioners are considered as entitled to classical instruction; but the master makes his own charge for other branches.

It became known as Netherthorpe Grammar School. From the 1980s until 1999, it was a grant-maintained school
Grant-maintained school
Grant-maintained schools were state schools in England and Wales between 1988 and 1998 that had opted out of local government control, being funded directly by a grant from central government...
, and is now a foundation school
Foundation school
In England and Wales, a foundation school is a state-funded school in which the governing body has greater freedom in the running of the school than in community schools....
(very much the same thing). It is to be redeveloped under the Building Schools for the Future
Building Schools for the Future
Building Schools for the Future is the name of the previous UK Government's investment programme in secondary school buildings in England. The program is very ambitious in its costs, timescales and objectives, with politicians from all English political parties supportive of the principle but...
scheme.

The school has two school anthems- these are Forty Years On
Forty Years On (song)
Forty Years On is a song written by Edward Ernest Bowen and John Farmer in 1872.It is specifically about life at school and is meant to give pupils now an idea of what it will be like in forty years when they return to their old school, and to remind old boys about their school life...
and Gaudeamus igitur and both are sung in certain assemblies and at special school occasions. The school strongly believes in traditions and roots; the uniform today is based on the uniforms of the first pupils and the original buildings are still actively used.

There is a Senior Debating Society that has run for ninety-three years. The meetings of the society are held in the original listed part of the school, built in 1572 and affectionately known as 'the old school' by pupils. Netherthorpe School are the current holders of the Derbyshire Debating Trophy. Currently run by Mr Martin

The schools pupils are divided into three houses after the founders; these houses are Sitwell, Frecheville and De Rodes. Throughout the year, pupils compete in inter-house competitions to win the coveted Rose Bowl. A stained-glass window in 'the old school' features the crests of these houses, in addition to the Cavendish coat of arms. Moreover, the colour schemes of the De Rodes and Sitwell houses have changed. The Netherthorpe uniform also comprises a blazer typically displaying the house badge; the exception is a highly prestigious award, the Colours, which replaces the house crest and features the school emblem.

In the upper sixth form, there are Head Prefects (head boy and head girl), and respective deputy heads. They form part of the team of (currently sixteen) Senior Prefects, who have a gamut of roles and responsibilities, including speaking in assembly. They also participate in the annual Boar's Head Carol
Boar's Head Carol
The Boar's Head Carol is a macaronic 15th century English Christmas carol that describes the ancient tradition of sacrificing a boar and presenting its head at a Yuletide feast...
, a tradition started at Queen's College, Cambridge. Additionally, they manage the group of 38 School Prefects, who assist in lower school. The lower sixth form has a similar number of House Prefects, who have badges colour-coded to match their respective houses. House Prefects are responsible for maintaining an orderly atmosphere in designated areas.

In 2011, the percentage of students attaining 5 or more higher-grade GCSE
General Certificate of Secondary Education
The General Certificate of Secondary Education is an academic qualification awarded in a specified subject, generally taken in a number of subjects by students aged 14–16 in secondary education in England, Wales and Northern Ireland and is equivalent to a Level 2 and Level 1 in Key Skills...
passes including English and Maths was 62.4%. A level results were similarly above average.