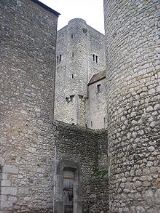 Encyclopedia
Nemours is a commune
Communes of France
The commune is the lowest level of administrative division in the French Republic. French communes are roughly equivalent to incorporated municipalities or villages in the United States or Gemeinden in Germany...
in the Seine-et-Marne
Seine-et-Marne
Seine-et-Marne is a French department, named after the Seine and Marne rivers, and located in the Île-de-France region.- History:Seine-et-Marne is one of the original 83 departments, created on March 4, 1790 during the French Revolution in application of the law of December 22, 1789...
department in the Île-de-France
Île-de-France (région)
Île-de-France is the wealthiest and most populated of the twenty-two administrative regions of France, composed mostly of the Paris metropolitan area....
region
Régions of France
France is divided into 27 administrative regions , 22 of which are in Metropolitan France, and five of which are overseas. Corsica is a territorial collectivity , but is considered a region in mainstream usage, and is even shown as such on the INSEE website...
in north-central France.

Nemours is located on the Loing
Loing
The Loing is a 142 km long river in central France, a left tributary of the Seine. Its source is in Sainte-Colombe-sur-Loing, in the south of the Yonne département.The Loing flows into the Seine in Saint-Mammès, near Moret-sur-Loing...
and its canal, c. 42 km (26.1 mi) south of Melun
Melun
Melun is a commune in the Seine-et-Marne department in the Île-de-France region in north-central France. Located in the south-eastern suburbs of Paris, Melun is the capital of the department, as the seat of an arrondissement...
, on the Paris-Lyon railway.

Nemours is supposed to derive its name from the woods (nemora) in the midst of which it formerly stood, and discoveries of Gallo-Roman remains indicate its early origin. It was captured by the English in 1420, but derives its historical importance rather from the lordship (afterwards duchy) to which it gave its name
Duke of Nemours
In the 12th and 13th centuries the Lordship of Nemours, in the Gatinais, France, was in possession of the house of Villebeon, a member of which, Gautier, was marshal of France in the middle of the 13th century...
. In 1585 a treaty revoking previous concessions to the Protestants
Treaty of Nemours
Articles of the Treaty of Nemours were agreed upon in writing and signed in Nemours on July 7, 1585 between the Queen Mother, Catherine de' Medici, acting for the King, and representatives of the House of Guise, including the Duke of Lorraine...
was concluded at Nemours between Catherine de' Medici
Catherine de' Medici
Catherine de' Medici was an Italian noblewoman who was Queen consort of France from 1547 until 1559, as the wife of King Henry II of France....
and the Guises
House of Guise
The House of Guise was a French ducal family, partly responsible for the French Wars of Religion.The Guises were Catholic, and Henry Guise wanted to end growing Calvinist influence...
.

The church, which dates mainly from the sixteenth century, has a handsome wooden spire. The feudal castle
Château de Nemours
The Château de Nemours is a castle in the town and commune of Nemours in the Seine-et-Marne département of France. Located in the extreme south of the Paris conurbation, it stands on the banks of the Loing river...
, erected around 1120 was turned into a museum in the 20th century. It has a central keep with four rounded towers.

In the vicinity is a group of fine sandstone
Sandstone
Sandstone is a sedimentary rock composed mainly of sand-sized minerals or rock grains.Most sandstone is composed of quartz and/or feldspar because these are the most common minerals in the Earth's crust. Like sand, sandstone may be any colour, but the most common colours are tan, brown, yellow,...
rocks, and sand is extensively quarried.

Nemours was the birthplace of: