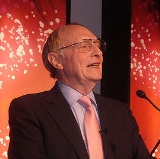 Following Labour's defeat in the 1992 election
United Kingdom general election, 1992
The United Kingdom general election of 1992 was held on 9 April 1992, and was the fourth consecutive victory for the Conservative Party. This election result was one of the biggest surprises in 20th Century politics, as polling leading up to the day of the election showed Labour under leader Neil...
, Kinnock resigned as party leader and after his departure from the House of Commons three years later served as a European Commissioner from 1995–2004.

The army of brokers, jobbers and other quaintly named parasites.

Devolutionary reform will not provide a factory, a machine or jobs, build a school, train a doctor or put a pound on pensions.

The House of Lords must go&mdash;not be reformed, not be replaced, not be reborn in some nominated life-after-death patronage paradise, just closed down, abolished, finished.

We must not look for some kind of Messiah.

Heckler: At least Mrs Thatcher has got guts.Neil Kinnock: It's a pity that other people had to leave theirs on the ground at Goose Green to prove it.

The roots of defeat which were put down by some of the elements of our party in the two or three years after 1980 made victory difficult to achieve.

I don't believe that the policies on which we fought the [1983] election ought to be ejected like some sort of spent cartridge.

[Marx's theories] gave me a political and intellectual justification for what I believed in a way that nothing else did.