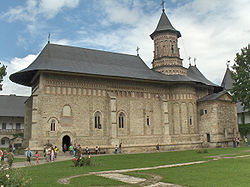 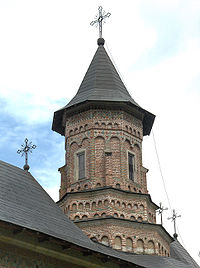 The Neamţ Monastery is a Romanian Orthodox
Romanian Orthodox Church
The Romanian Orthodox Church is an autocephalous Eastern Orthodox church. It is in full communion with other Eastern Orthodox churches, and is ranked seventh in order of precedence. The Primate of the church has the title of Patriarch...
religious settlement, one of the oldest and most important of its kind in Romania
Romania
Romania is a country located at the crossroads of Central and Southeastern Europe, on the Lower Danube, within and outside the Carpathian arch, bordering on the Black Sea...
. It was built in 14th century, and it is an example of medieval Moldavia
Moldavia
Moldavia is a geographic and historical region and former principality in Eastern Europe, corresponding to the territory between the Eastern Carpathians and the Dniester river...
n architecture. A jewel of 15th century architecture, the church was built during Ştefan cel Mare's reign and finished in the year when the Moldavian army won the battle against King John Albert
John I Albert of Poland
John I Albert was King of Poland and Duke of Głogów .-Life:John was the third son of Casimir IV Jagiellon, King of Poland, and Elisabeth of Austria, daughter of Albert II of Germany. As crown prince, he distinguished himself by his brilliant victory over the Tatars at Kopersztyn...
(1497).

The monastery is located in north-eastern part of Romania, in Neamţ County
Neamt County
Neamț is a county of Romania, in the historic region of Moldavia, with the county seat at Piatra Neamț. It has three communes, Bicaz-Chei, Bicazu Ardelean and Dămuc in Transylvania.-Demographics:...
, 10 km west of Târgu Neamţ
Târgu Neamt
Târgu Neamţ is a town in Neamţ County, Romania, on the Neamţ River. It had, , a population of 20,496. Three villages are administered by the town: Blebea, Humuleşti and Humuleştii Noi.- History :...
. It is accessible by car (DN 15B road) and train (Târgu Neamţ railway station); the nearest airport is Suceava
Suceava Airport
Suceava "Ştefan cel Mare" Airport is an airport located in northeastern Romania, east of the municipality of Suceava, west of the municipality of Botoşani and close to the town of Salcea. It serves both Suceava and Botoşani counties. The airport has six parking stands.-History:Ştefan cel Mare...
, located about 60 km north.

Sumptuous, with delicate colour effects, the monastery shows the maturity of the Moldavian architectonic style, which matured during Stefan cel Mare's period. The façade of the church is covered with the decoration characteristic of Stefan cel Mare's time: Gothic windows and friezes with enamelled disks, coloured in green, yellow and brown.

In the chamber of the tombs, which appear for the first time at this church, is the tomb of Stefan al II-lea, son of Alexandru cel Bun
Alexandru cel Bun
Alexander cel Bun was a Voivode of Moldavia, reigning between 1400 and 1432, son of Roman I Mușat. He succeeded Iuga to the throne, and, as a ruler, initiated a series of reforms while consolidating the status of the Moldavian Principality....
and uncle of Ştefan cel Mare
Stephen III of Moldavia
Stephen III of Moldavia was Prince of Moldavia between 1457 and 1504 and the most prominent representative of the House of Mușat.During his reign, he strengthened Moldavia and maintained its independence against the ambitions of Hungary, Poland, and the...
.

The art treasures kept at Neamţ Monastery are proof of the intense artistic and cultural activity which took place here through the centuries. Here Gavril Uric showed his talent, the most important representative of the Moldavian miniature from the 15th century. His first known manuscript, dated 1429, is kept in the Bodleian Library at Oxford (UK). The calligraphers and miniaturists of Stefan cel Mare who worked at this important center made many of the books given to Putna Monastery
Putna Monastery
The Putna monastery is a Romanian Orthodox monastery, one of the most important cultural, religious and artistic centers established in medieval Moldavia; as with many others, it was built and dedicated by Prince Stephen the Great. Putna was founded on the lands perambulated by the Putna...
. In the cells of the monastery, the chronicler Macarie wrote the chronicle of Petru Rareş
Petru Rares
Peter IV Rareș was twice voievod of Moldavia: 20 January 1527 to 18 September 1538 and 19 February 1541 to 3 September 1546. He was an illegitimate child born to Ștefan cel Mare...
's rule, and Eftimie the chronicle of Alexandru Lăpuşneanu
Alexandru Lapusneanu
Alexandru Lăpuşneanu was Prince of Moldavia between September 1552 and 18 November 1561 and then between October 1564 and 5 May 1568....
's rule.

The learned tradition of the Neamţ Monastery disappeared in the 17th and 18th centuries, to be reborn at the beginning of next century, when Metropolitan Veniamin Costachi established a printing house here. In the monastery museum is the old printing press, which was used to print books since 1807. In the monastery is a famous library more than 600 years old. Among the almost 11,000 volumes are many rare books, some being the first ones printed in this country. The altar screen of the former church from Neamţ Fortress, is the most important treasure of all those in the monastery, along with the icon painted by Nicolae Grigorescu
Nicolae Grigorescu
Nicolae Grigorescu was one of the founders of modern Romanian painting.-Biography:He was born in Pitaru, Dâmboviţa County, Wallachia. In 1843 the family moved to Bucharest. At a young age , he became an apprentice at the workshop of the painter Anton Chladek and created icons for the church of...
"The Flight from Egypt".