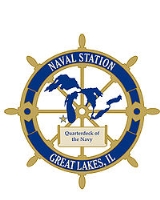 Encyclopedia
Naval Station Great Lakes is the home of the United States Navy
United States Navy
The United States Navy is the naval warfare service branch of the United States Armed Forces and one of the seven uniformed services of the United States. The U.S. Navy is the largest in the world; its battle fleet tonnage is greater than that of the next 13 largest navies combined. The U.S...
's only boot camp, located near the city of North Chicago, Illinois
North Chicago, Illinois
North Chicago is an outer suburb/exurb of the Chicago metropolitan area and is an incorporated city in Lake County, Illinois, United States. The population was 35,918 at the 2000 census....
, in Lake County
Lake County, Illinois
Lake County is a county in the northeastern corner of the state of Illinois, on the shore of Lake Michigan. According to the 2010 census, it has a population of 703,462, which is an increase of 9.2% from 644,356 in 2000. Its county seat is Waukegan. The county is part of the Chicago metropolitan area...
. Important tenant commands include the Recruit Training Command
Recruit Training Command
Recruit Training Command Great Lakes, is the command within the United States Navy primarily responsible for conducting the initial orientation and training of new recruits. It commonly is referred to as boot camp, recruit training, or informally "Great Mistakes". It is approximately eight weeks long...
, Training Support Center and Navy Recruiting District Chicago. Naval Station Great Lakes is the largest military installation in Illinois and the largest training station in the Navy. The base has 1,153 buildings situated on 1628 acres (6.6 km²) and has 50 miles (80.5 km) of roadway to provide access to the base's facilities. Within the naval service, it has several different nicknames, including "The Quarterdeck of the Navy," or the more derogatory "Great Mistakes."

One of the landmarks of the area is Building 1, also known as the clocktower building. Completed in 1911, the building is made of red brick, and has a tower that stands 300 feet over the third floor of the building. The large parade ground in front of the administration building is named Ross Field.

In 1996, RTC Great Lakes became the Navy's only basic training facility. The Base Realignment and Closure Commission of 1993 resulted in the closure of Naval Training Center San Diego, California and Naval Training Center Orlando, Florida, their associated Recruit Training Commands, and the consolidation of US Navy enlisted recruit training to Great Lakes. Approximately 40,000 recruits pass through Recruit Training Command annually with an estimated 7,000 recruits onboard the installation at any time. RTC Great Lakes has been turning civilians into Sailors for over 100 years.

Culinary Specialist
Culinary Specialist (US Navy)
Culinary Specialist is a United States Navy occupational rating. It was formerly the Mess Management Specialist rating until 15 January 2004, and as Steward prior to 1975.-Duties:...
(CS) A-school was also taught at TSC Great Lakes until December 10, 2010, when the school graduated its final class. The course has been consoldated with the US Army's parallel program and relocated to Fort Lee
Fort Lee
Fort Lee may refer to:* Fort Lee, New Jersey* Battle of Fort Lee was fought on November 19, 1776 between American and British forces.* Fort Lee , a United States Army post...
, Virginia.
Hospital Corpsman (HM) "A" School has been moved out of Great Lakes. The last class graduated on July 27, 2011. It's last class was Class 11-125. The school has relocated to the Medical Education and Training Campus at Fort Sam Houston
Fort Sam Houston
Fort Sam Houston is a U.S. Army post in San Antonio, Texas.Known colloquially as "Fort Sam," it is named for the first President of the Republic of Texas, Sam Houston....
, Joint Base San Antonio
Joint Base San Antonio
Joint Base San Antonio is a United States military facility located in San Antonio, Texas. The facility is under the jurisdiction of the United States Air Force 502d Air Base Wing, Air Education and Training Command ....
, Texas. This change has merged Air Force, Army, and Navy Medical staff to a centralized location.
In addition, all Navy rates that require basic electrical knowledge and troubleshooting training complete Apprentice Technical Training (ATT) school. This includes the Mineman
Mineman
Mineman is a United States Navy occupational rating.-Duties:* Perform organizational and intermediate level maintenance on underwater mines and associated equipment, guns, gun mounts, handling equipment, small arms, surface sonar and mine countermeasures equipment.* Assemble, test, stow, and...
(MN) and Sonar Technician
Sonar Technician
Sonar Technician is a United States Navy occupational rating.ST's are responsible for underwater surveillance. They assist in safe navigation and aid in search, rescue and attack operations. They operate and repair sonar equipment...
(Surface) (STG) rates, as well as some aviation rates prior to detachment to their respective school locations in San Diego, CA and Pensacola, FL. Boatswain's Mates complete Surface Common Core (SCC) Basic Maintenance Training and engineering rates complete Basic Engineering Common Core (BECC)

Geographically, the station separates the affluent North Shore
North Shore (Chicago)
The North Shore is a term that refers to the generally affluent suburbs north of Chicago, Illinois bordering the shore of Lake Michigan.- History :Europeans settled the area sparsely after an 1833 treaty with local Native Americans...
from the more industrial Waukegan
Waukegan, Illinois
Waukegan is a city and county seat of Lake County, Illinois. As of the 2000 census, the city had a total population of 87,901. The 2010 population was 89,078. It is the ninth-largest city in Illinois by population...
/North Chicago
North Chicago, Illinois
North Chicago is an outer suburb/exurb of the Chicago metropolitan area and is an incorporated city in Lake County, Illinois, United States. The population was 35,918 at the 2000 census....
area, the latter now announcing numerous redevelopments across their span for strip malls and New Urban residency communities.

On or near the base is the Great Lakes Naval Museum, one of fifteen official U.S. Navy museums.