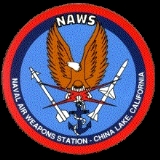 Naval Air Weapons Station (NAWS) China Lake is part of Commander, Navy Region Southwest under Commander, Navy Installation Command and is located in the Western Mojave Desert
Mojave Desert
The Mojave Desert occupies a significant portion of southeastern California and smaller parts of central California, southern Nevada, southwestern Utah and northwestern Arizona, in the United States...
region of California, approximately 150 miles (241.4 km) north of Los Angeles. Occupying three counties – Kern, San Bernardino and Inyo – the installation’s closest neighbors are the cities of Ridgecrest
Ridgecrest, California
Ridgecrest, formerly known as Crumville, was incorporated as a city in 1913. It is located in the Indian Wells Valley in northeastern Kern County, California, adjacent to the Naval Air Weapons Station China Lake . Ridgecrest is the only incorporated city along US 395 in Kern County...
, Inyokern, Trona and Darwin
Darwin, California
Darwin is a census-designated place in Inyo County, California, United States. Darwin is located southeast of Keeler, at an elevation of 4790 feet . The population was 43 at the 2010 census, down from 54 at the 2000 census. It is named after Dr...
. The main gate of the installation is located at the intersection of Inyokern Road (Highway 178) and China Lake Blvd. in the city of Ridgecrest.

China Lake is the United States Navy
United States Navy
The United States Navy is the naval warfare service branch of the United States Armed Forces and one of the seven uniformed services of the United States. The U.S. Navy is the largest in the world; its battle fleet tonnage is greater than that of the next 13 largest navies combined. The U.S...
's largest single landholding, representing 85 percent of the Navy’s land for weapons and armaments research, development, acquisition, testing and evaluation (RDAT&E) use and 38 percent of the Navy’s land holdings worldwide. In total, its two ranges and main site cover more than 1100000 acres (4,451.5 km²), an area larger than the state of Rhode Island. As of 2010, at least 95 percent of that land has been left undeveloped. The roughly $3 billion infrastructure of the installation consists of 2,132 buildings and facilities, 329 miles (529.5 km) of paved roads, and 1801 miles (2,898.4 km) of unpaved roads.

The 19600 square miles (50,763.8 km²) of restricted and controlled airspace at China Lake makes up 12 percent of California’s total airspace and provides an unprecedented venue for integrated testing and training of today’s warfighter. Jointly-controlled by NAWS China Lake, Edwards Air Force Base
Edwards Air Force Base
Edwards Air Force Base is a United States Air Force base located on the border of Kern County, Los Angeles County, and San Bernardino County, California, in the Antelope Valley. It is southwest of the central business district of North Edwards, California and due east of Rosamond.It is named in...
and Fort Irwin
Fort Irwin Military Reservation
Fort Irwin & the National Training Center is a major training area for the United States Military and is a census-designated place located in the Mojave Desert in northern San Bernardino County, California. Fort Irwin sits at an elevation of . The 2010 United States census reported Fort Irwin's...
, this airspace is known as the R-2508 Special Use Airspace Complex
R-2508 Special Use Airspace Complex
The R-2508 Complex includes all the airspace and associated land presently used and managed by the three principal military activities in the Upper Mojave Desert region:*Air Force Flight Test Center , Edwards Air Force Base...
.

NAWS China Lake's mission is to support the Navy's research, testing and evaluation missions to provide cutting-edge weapons systems to the warfighter.

To support the Fleet, fighter and family fighting the Global War on Terror with consistent, standardized and reliable performance at China Lake by providing the right service, at the right time, at the right cost, and to be ready to defend the installation should the war come to our gate.

All aircraft operations at NAWS China Lake are conducted at Armitage Field which has three runways with more than 26000 feet (7,924.8 m) of taxiway. More than 20,000 manned and un-manned military sorties are conducted out of Armitage by U.S. Armed Forces each year.

Foreign military personnel also use the airfield and range to conduct more than 1,000 test and evaluation operations each year.

Nearly 900 military and civilians passed through Armitage Field in 2007.

The 620 active duty military, 4,166 civilian employees and 1,734 contractors that make up China Lake's workforce are employed across multiple tenant commands, including:

In the midst of World War II
World War II
World War II, or the Second World War , was a global conflict lasting from 1939 to 1945, involving most of the world's nations—including all of the great powers—eventually forming two opposing military alliances: the Allies and the Axis...
, adequate facilities were needed by the California Institute of Technology
California Institute of Technology
The California Institute of Technology is a private research university located in Pasadena, California, United States. Caltech has six academic divisions with strong emphases on science and engineering...
for test and evaluation of rockets. At the same time, the Navy needed a new proving ground for aviation ordnance. Cal Tech's Dr. Charles C. Lauritsen and then Cmdr. Sherman E. Burroughs met and formed a pact to find a site that would meet both their needs.

The Navy established China Lake as the Naval Ordnance Test Station (NOTS) in November 1943. Its mission was defined in a letter by the Secretary of the Navy, ".... a station having for its primary function the research, development and testing of weapons, and having additional function of furnishing primary training in the use of such weapons." Testing began within a month of the Station's formal establishment. The vast and sparsely populated desert with near perfect flying weather and practically unlimited visibility, proved an ideal location not only for test and evaluation activities, but also for a complete research and development establishment.

The early Navy-Cal Tech partnership established a pattern of cooperation and interaction between civilian scientists and engineers, experienced military personnel and defense contractors that has made China Lake one of the preeminent research, development, test and evaluation institutions in the world. Dr. L.T.E. Thompson
L.T.E. Thompson
Dr. Louis Ten Eyck "Tec" Thompson ; known as Dr. Tommy) was a US physicist interested in thermodynamica and ballistics and as an expert working for the US Navy from 1920 to 1954...
was the first civilian head at the unit.

The Station's role in the community has evolved from that of primary landlord and provider of services to that of being primarily a good neighbor. The present NAWS housing area, much smaller than that of the 1960s, is sufficient to support the Station's military. The community area of China Lake was annexed by the City of Ridgecrest
Ridgecrest, California
Ridgecrest, formerly known as Crumville, was incorporated as a city in 1913. It is located in the Indian Wells Valley in northeastern Kern County, California, adjacent to the Naval Air Weapons Station China Lake . Ridgecrest is the only incorporated city along US 395 in Kern County...
in 1982 and today the spirit of community extends to residents both on and off the base.

While the Navy’s mission is primarily national defense, they and NAWS China Lake are committed to operating forces and conducting training in a manner compatible with the environment. National defense and environmental protection are not mutually exclusive goals. Part of the Navy's mission is to also prevent pollution, protect the environment and protect natural, historical and cultural resources.

The majority of the land at NAWS China Lake is undeveloped and provides habitat for more than 340 species of wildlife, including wild horses and burros and endangered animals, such as the desert tortoise
Desert Tortoise
The desert tortoise is a species of tortoise native to the Mojave desert and Sonoran desert of the southwestern United States and northwestern Mexico. They can be located in western Arizona, southeastern California, southern Nevada, and southwestern Utah. The species name agassizii is in honor of...
and Mohave Tui Chub
Tui chub
The Tui chub, Gila bicolor, is a cyprinid fish native to western North America. Widespread in many areas, it is an important food source for other fish, including the cutthroat trout.- Range :...
. The installation is also home to 650 plant types.

The area was once also home to the Native American
Indigenous peoples of the Americas
The indigenous peoples of the Americas are the pre-Columbian inhabitants of North and South America, their descendants and other ethnic groups who are identified with those peoples. Indigenous peoples are known in Canada as Aboriginal peoples, and in the United States as Native Americans...
Coso People
Coso People
The Coso people are an indigenous people of the Americas and Native American tribe associated with the Coso Range in the Mojave Desert of California in the southwestern U.S.. They are of the Uto-Aztecan language and spoke one of several Numic languages, related to that of the Northern Paiute.They...
, whose presence here is marked by thousands of archaeological sites; the Coso traded with other tribes as far away as San Luis Obispo County, California
San Luis Obispo County, California
San Luis Obispo County is a county located along the Pacific Ocean in the Central Coast of the U.S. state of California, between Los Angeles and the San Francisco Bay Area. As of the 2010 census its population was 269,637, up from 246,681 at the 2000 census...
. This locale was also a site used by European miners and settlers whose cabins and mining structures are extant throughout the Station. Among the notable archaeological sites is the National Park Service's

The Coso Range Canyons
Coso Range
The Coso Range of eastern California is located immediately south of Owens Lake , east of the Sierra Nevada Mountains, and west of the Argus Range. The southern part of the range lies in the restricted Naval Air Weapons Station China Lake...
are home to the Coso Rock Art District
Coso Rock Art District
Coso Rock Art District, containing the Big and Little Petroglyph Canyons, is a rock art site containing over 20,000 of Paleo-Indian and/or Native American Petroglyphs The Coso Range is between the Sierra Nevada and the Argus Range. Indian Wells Valley lies to the south of this location...
, an area of some 99 square miles (256.4 km²) which contains more than 50,000 documented petroglyphs, the highest concentration of rock art
Rock art
Rock art is a term used in archaeology for any human-made markings made on natural stone. They can be divided into:*Petroglyphs - carvings into stone surfaces*Pictographs - rock and cave paintings...
in the Northern Hemisphere.

No one knows for sure how old these petroglyphs are. A broad range of dates can be inferred from archaeological sites in the area and some artifact forms depicted on the rocks. Some of them may be as old as 16,000 years, some as recent as the 1800s. Designs range from animals to abstract to anthropomorphic figures. Opinions vary widely whether the petroglyphs were made for ceremonial purposes, whether they are telling stories to pass along the mythology of their makers, or whether they are records of hunting hopes or successes, clan symbols or maps.

Little Petroglyph Canyon contains 20,000 documented images, which surpasses in number most other collections.

NAWS China Lake firmly believes that the petroglyphs located within the installation are a treasure and should be shared. Little Petroglyph Canyon is open to the public for tours.

The Station is also home to the Coso Geothermal Field. The geothermal power plants located there began generating electricity in 1987 and are the Navy’s first foray into producing clean power from the earth’s thermal energy (heat). Total electricity production from the field amounts to 270 megawatt-hours (972,000,000,000 J) per year, equivalent to saving over 4 million barrels of oil. Just one megawatt of electricity will meet the needs of approximately 1,400 households.

Chinese men harvested borax
Borax
Borax, also known as sodium borate, sodium tetraborate, or disodium tetraborate, is an important boron compound, a mineral, and a salt of boric acid. It is usually a white powder consisting of soft colorless crystals that dissolve easily in water.Borax has a wide variety of uses...
from the dry lake bed approximately 1.5 miles south of Paxton Ranch. The operation was known locally as “The Little Chinese Borax Works’’.