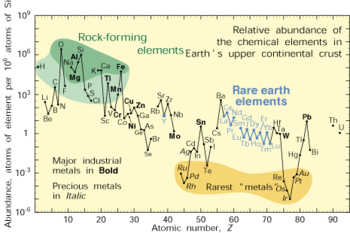 In chemistry
Chemistry
Chemistry is the science of matter, especially its chemical reactions, but also its composition, structure and properties. Chemistry is concerned with atoms and their interactions with other atoms, and particularly with the properties of chemical bonds....
, natural abundance (NA) refers to the abundance of isotope
Isotope
Isotopes are variants of atoms of a particular chemical element, which have differing numbers of neutrons. Atoms of a particular element by definition must contain the same number of protons but may have a distinct number of neutrons which differs from atom to atom, without changing the designation...
s of a chemical element
Chemical element
A chemical element is a pure chemical substance consisting of one type of atom distinguished by its atomic number, which is the number of protons in its nucleus. Familiar examples of elements include carbon, oxygen, aluminum, iron, copper, gold, mercury, and lead.As of November 2011, 118 elements...
as naturally found on a planet. The relative atomic mass (a weighted average) of these isotopes is the atomic weight
Atomic weight
Atomic weight is a dimensionless physical quantity, the ratio of the average mass of atoms of an element to 1/12 of the mass of an atom of carbon-12...
listed for the element in the periodic table
Periodic table
The periodic table of the chemical elements is a tabular display of the 118 known chemical elements organized by selected properties of their atomic structures. Elements are presented by increasing atomic number, the number of protons in an atom's atomic nucleus...
. The abundance of an isotope varies from planet to planet but remains relatively constant in time.

As an example, uranium
Uranium
Uranium is a silvery-white metallic chemical element in the actinide series of the periodic table, with atomic number 92. It is assigned the chemical symbol U. A uranium atom has 92 protons and 92 electrons, of which 6 are valence electrons...
has three naturally occurring isotopes: 238U, 235U and 234U. Their respective NA is 99.2745%, 0.72% and 0.0055%. For example, if 100,000 uranium atoms were analyzed, one would expect to find approximately 99,275 238U atoms, 720 235U atoms, and no more than 5 or 6 234U atoms. This is because 238U is much more stable than 235U or 234U, as the half-life
Half-life
Half-life, abbreviated t½, is the period of time it takes for the amount of a substance undergoing decay to decrease by half. The name was originally used to describe a characteristic of unstable atoms , but it may apply to any quantity which follows a set-rate decay.The original term, dating to...
of each isotope reveals: 4.468×109 years for 238U compared to 7.038×108 years for 235U and 245,500 years for 234U. However, the natural abundance of a given isotope is also affected by the probability of its creation in nucleosynthesis
Nucleosynthesis
Nucleosynthesis is the process of creating new atomic nuclei from pre-existing nucleons . It is thought that the primordial nucleons themselves were formed from the quark–gluon plasma from the Big Bang as it cooled below two trillion degrees...
(as in the case of samarium
Samarium
Samarium is a chemical element with the symbol Sm, atomic number 62 and atomic weight 150.36. It is a moderately hard silvery metal which readily oxidizes in air. Being a typical member of the lanthanide series, samarium usually assumes the oxidation state +3...
; radioactive 147Sm and 148Sm are much more abundant than stable 144Sm) and by production of a given isotope by natural radioactive isotopes (as in the case of radiogenic isotopes of lead
Isotopes of lead
Lead has four stable isotopes: 204Pb, 206Pb, 207Pb, 208Pb. Lead-204 is entirely a primordial nuclide and is not a radiogenic nuclide. The three isotopes lead-206, lead-207, and lead-208 represent the ends of three decay chains called the uranium series , the actinium series, and the thorium...
).

It is now known from from study of the sun and primitive meteorites that the solar system was initially almost homogeneous in isotopic composition. Deviations from the (evolving) galactic average, locally-sampled around the time that the sun's nuclear burning began, can generally be accounted for by mass fractionation (see the article on mass-independent fractionation
Mass-independent fractionation
Mass-independent fractionation refers to any chemical or physical process that acts to separate isotopes, where the amount of separation does not scale in proportion with the difference in the masses of the isotopes...
) plus a limited number of nuclear decay and transmutation processes. There is also evidence for injection of short-lived (now extinct) isotopes from a nearby supernova explosion that may have triggered solar nebula collapse. Hence deviations from natural abundance on earth are often measured in parts per thousand (per mil or ‰) because they are less than one percent (%).

The single exception to this lies with the presolar grains
Presolar grains
Presolar grains are isotopically-distinct clusters of material found in the fine-grained matrix of primitive meteorites, such as chondrites, whose differences from the surrounding meteorite suggest that they are older than the solar system...
found in primitive meteorites. These bypassed the homogenization, and often carry the nuclear signature of specific nucleosynthesis processes in which their elements were made. In these materials, deviations from "natural abundance" are sometimes measured in factors of 100.