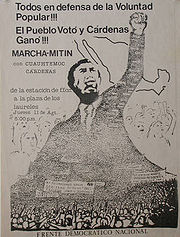 The National Democratic Front was a coalition of left-wing Mexican
Politics of Mexico
The politics of Mexico take place in a framework of a federal presidential representative democratic republic whose government is based on a congressional system, whereby the president of Mexico is both head of state and head of government, and of a multi-party system...
political parties
Political Parties
Political Parties: A Sociological Study of the Oligarchical Tendencies of Modern Democracy is a book by sociologist Robert Michels, published in 1911 , and first introducing the concept of iron law of oligarchy...
created in 1988 presidential elections
Mexican general election, 1988
General elections were held in Mexico on July 6, 1988. The presidential elections were won by Carlos Salinas de Gortari, who received 50.7% of the vote, the lowest for a winning candidate since direct elections were introduced for the presidency in 1917...
, and that is the immediate antecedent of the Party of the Democratic Revolution
Party of the Democratic Revolution
The Party of the Democratic Revolution is a democratic socialist party in Mexico and one of 2 Mexican affiliates of the Socialist International...
. It was result of an agglutination of small political left and center-left forces with a dissident members of Institutional Revolutionary Party
Institutional Revolutionary Party
The Institutional Revolutionary Party is a Mexican political party that held power in the country—under a succession of names—for more than 70 years. The PRI is a member of the Socialist International, as is the rival Party of the Democratic Revolution , making Mexico one of the few...
(PRI). The candidate was Cuauhtémoc Cárdenas
Cuauhtémoc Cárdenas
Cuauhtémoc Cárdenas Solórzano is a prominent Mexican politician. He was a former Head of Government of the Federal District and a founder of the Party of the Democratic Revolution .-Biography:...
.

The National Democratic Front had its origins in the PRI, where the Democratic Current, headed by Cuauhtémoc Cárdenas
Cuauhtémoc Cárdenas
Cuauhtémoc Cárdenas Solórzano is a prominent Mexican politician. He was a former Head of Government of the Federal District and a founder of the Party of the Democratic Revolution .-Biography:...
, Porfirio Muñoz Ledo
Porfirio Muñoz Ledo
Porfirio Alejandro Muñoz Ledo y Lazo de la Vega is a Mexican politician. He is one of the founders of the Party of the Democratic Revolution ....
, César Buenrostro, Ifigenia Martínez, among others, in 1987, tried, among other things, to democratize the internal election in the PRI. Finally after Carlos Salinas de Gortari was nominated the official candidate of the PRI by outgoing president Miguel de la Madrid
Miguel de la Madrid
Miguel de la Madrid Hurtado is a Mexican politician affiliated to the Institutional Revolutionary Party who served as President of Mexico from 1982 to 1988.-Biography:...
, the members of the Democratic Current broke from the PRI, looking for a party to support Cárdenas' presidential candidacy.

Cárdenas and Muñoz Ledo created a pact in 1988 with the Mexican left in which the Mexican Socialist Party
Mexican Socialist Party
The Socialist Mexican Party was the former left-wing Mexican political party immediate antecedent of the present Party of the Democratic Revolution, it was the last effort of unification of the different Mexican parties of left and the last political party that the socialist word in its name was...
(whose candidate was Heberto Castillo
Heberto Castillo
Heberto Castillo Martínez was a Mexican civil engineer and political activist.Castillo was born in Ixhuatlán de Madero, Veracruz, and received a bachelor's degree in civil engineering from the National Autonomous University...
) decided to support Cárdenas' candidacy as well. Also, the alliance with social organizations was obtained, like the Coalition of Workers, Peasants, and Students of the Isthmus
Coalition of Workers, Peasants, and Students of the Isthmus
The Coalition of Workers, Peasants, and Students of the Isthmus is a Mexican socialist political organization in Juchitán, Oaxaca. Founded in 1973/1974, it supports agrarian reform, and workers rights...
(COCEI) (that had gained the local elections in Juchitán de Zaragoza
Juchitán de Zaragoza
Juchitán de Zaragoza is an indigenous town in the southeast of the Mexican state of Oaxaca.It is part of the Juchitán District in the west of the Istmo de Tehuantepec region...
), the Independent Power station of Agricultural Workers and Peasants (CIOAC), the Assembly of Districts of the City of Mexico (created after 1985 earthquakes
1985 Mexico City earthquake
The 1985 Mexico City earthquake, a magnitude 8.0 earthquake that struck Mexico City on the early morning of 19 September 1985 at around 7:19 AM , caused the deaths of at least 10,000 people and serious damage to the greater Mexico City Area. The complete seismic event...
), the Union of Popular Colonies and the Revolutionary Union of Emiliano Zapata
Emiliano Zapata
Emiliano Zapata Salazar was a leading figure in the Mexican Revolution, which broke out in 1910, and which was initially directed against the president Porfirio Díaz. He formed and commanded an important revolutionary force, the Liberation Army of the South, during the Mexican Revolution...
, among others. This agglomerate of civil parties and organizations they would be, along with the Democratic Current of the PRI, the base of future PRD.

The winning candidate of the race on July 6, 1988 was Carlos Salinas de Gortari, but he suffered a crisis of legitimacy, because Cárdenas proclaimed himself the winner accusing the PRI of having stolen the election.

After the elections, great part of the parties and social organizations who had formed the National Democratic Front decided to join forces into a new party, the Party of the Democratic Revolution, that would formally found in the May 5, 1989, with Cuauhtémoc Cárdenas
Cuauhtémoc Cárdenas
Cuauhtémoc Cárdenas Solórzano is a prominent Mexican politician. He was a former Head of Government of the Federal District and a founder of the Party of the Democratic Revolution .-Biography:...
as their president.
The source of this article is wikipedia, the free encyclopedia.  The text of this article is licensed under the GFDL.