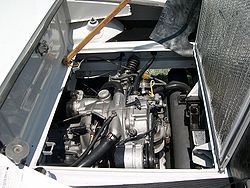 The NSU Spider was the first production car in the world to be powered by a Rotary Wankel
Wankel engine
The Wankel engine is a type of internal combustion engine using an eccentric rotary design to convert pressure into a rotating motion instead of using reciprocating pistons. Its four-stroke cycle takes place in a space between the inside of an oval-like epitrochoid-shaped housing and a rotor that...
engine.

Apart from its water-cooled single rotor engine, the car was in most respects unremarkable. However, standard equipment did include disc brakes on the front wheels.

First appearing at the Frankfurt Motor Show in 1964, the Spider featured a two-door cabriolet body based on that of the NSU Sport Prinz coupé introduced back in 1959. In addition to the folding roof, the Spider was distinguishable from the hard top car by a grill at the front. As with all NSU cars at the time, the engine was rear-mounted: in order to improve weight distribution, space was found for the Spider’s radiator and for its 35 l (9 US gal; 8 imp gal) fuel tank ahead of the driver. The front luggage locker was in consequence small.

The Wankel engine
Wankel engine
The Wankel engine is a type of internal combustion engine using an eccentric rotary design to convert pressure into a rotating motion instead of using reciprocating pistons. Its four-stroke cycle takes place in a space between the inside of an oval-like epitrochoid-shaped housing and a rotor that...
, invented by Felix Wankel
Felix Wankel
Felix Heinrich Wankel was a German mechanical engineer and inventor after whom the Wankel engine was named. He is the only twentieth century engineer to have designed an internal combustion engine which went into production.-Early life:Wankel was born in Lahr, Baden, in the upper Rhine Valley...
differed from a piston engine because the quasi-oval design of the combustion chamber, containing a rotor that ascribed within the chamber an Epitrochoid
Epitrochoid
An epitrochoid is a roulette traced by a point attached to a circle of radius r rolling around the outside of a fixed circle of radius R, where the point is a distance d from the center of the exterior circle....
shaped trajectory, enabling the combustion pressure to be converted directly into a rotary motion. There was no need to lose energy converting reciprocating movement into rotational movement. The result was a remarkably compact free revving engine which in the 1960s was hailed by some as the next major step forward in automobile design. It later transpired that the characteristics of certain critical materials selected and applied by NSU to build production rotary engines were inappropriate to the stresses they would bear, and rotary-engined cars acquired a reputation for unreliability. Engines required frequent rebuilding to replace worn apex seals, and warranty costs associated with installation of the engine in NSU’s second Wankel-engined model destroyed the financial viability of NSU, forcing a merger with Audi
Audi
Audi AG is a German automobile manufacturer, from supermini to crossover SUVs in various body styles and price ranges that are marketed under the Audi brand , positioned as the premium brand within the Volkswagen Group....
in 1969. The only large scale automaker to persist with the rotary engine – and then only for niche models
Mazda RX-8
The Mazda RX-8 is a sports car manufactured by Mazda Motor Corporation. It first appeared in 2001 at the North American International Auto Show. It is the successor to the RX-7 and, like its predecessors in the RX range, it is powered by a Wankel engine. The RX-8 began North American sales in the...
– was Mazda
Mazda
is a Japanese automotive manufacturer based in Fuchū, Aki District, Hiroshima Prefecture, Japan.In 2007, Mazda produced almost 1.3 million vehicles for global sales...
: piston engines continued to dominate the world’s automobile engine bays. During the Spider’s production period, these disappointments were generally not foreseen, however.

The rotary engine was installed above the rear axle. It was compact, light and very free revving in comparison with conventional engines of the time. By ignoring the manufacturers’ recommendations it was possible to rev the engine briefly above 7000 rpm in the lower gears and thereby to achieve a 0 – 100 km/h (0 – 62 mph) time of 14.5 seconds: other sources, presumably based on following the manufacturers' recommendations, give a time of 15.7 seconds.

Large sales volumes were never envisaged for the car, and this was reflected in a relatively high retail price, $2,979 American. Between 1964 and 1967 2,375 were built. In 1967, the model was withdrawn and NSU's second rotary-engined production saloon was presented. The Ro80 would notch up 37,398 units during its ten year production run.

In 1966 Al Auger of Richmond, California USA became the first person in the world to race a Wankel-powered production car in officially sanctioned races. With only installing a mandatory roll-bar and racing tires an NSU Spider raced in 1966 and 1967 in Sports Car Club of America sanctioned road races throughout California finishing second overall champion both years in Class H Modified. Because SCCA had no technical information about the Wankel engine it was placed in H Modified racing against lighter, more powerful 850 cc highly modified pure race cars.