Encyclopedia
Non-flammable Alcohol Vapor in Carbon Dioxide (NAV-CO2) systems were developed in Japan in the 1990s to sanitize hospitals and ambulances. These systems were developed in response to a need for a safe, effective, and environmentally sound way of sanitizing without the use of toxic or corrosive chemicals. It is the leading disinfectant in hospitals in the United States and is becoming more common worldwide due to its convenience. 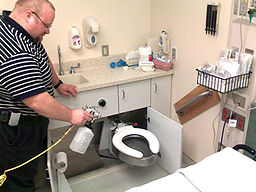 NAV-CO2 systems use liquid carbon dioxide
Carbon dioxide
Carbon dioxide is a naturally occurring chemical compound composed of two oxygen atoms covalently bonded to a single carbon atom...
(CO2) as a propellant. NAV-CO2 systems combine alcohol-based sanitizing solutions with a heated stream of CO2 liquid to create a vapor capable of penetrating small crevices and gaps. As CO2 and atomized alcohol evaporate completely at room temperature, no residue remains. CO2 displaces oxygen, eliminating one of the elements needed to support combustion. Sanitizing chemicals such as quaternary ammonium can be added to alcohol based sanitizers to extend the killing time on surfaces. NAV-CO2 systems are used to sanitize contact surfaces where individuals may become infected. Hand washing and sanitizing surfaces with alcohol-based solutions are effective methods for the prevention of nosocomial infection
Nosocomial infection
A nosocomial infection , also known as a hospital-acquired infection or HAI, is an infection whose development is favoured by a hospital environment, such as one acquired by a patient during a hospital visit or one developing among hospital staff...
.

Hospitals, ambulances, nursing homes, public waiting areas and food processing plants are places where disease-causing bacteria and viruses are known to colonize. NAV-CO2 eliminates the use and disposal of toxic chemicals such as bleach and other commercial products.

Alcohol-based solutions Tuberculosis
Tuberculosis
Tuberculosis, MTB, or TB is a common, and in many cases lethal, infectious disease caused by various strains of mycobacteria, usually Mycobacterium tuberculosis. Tuberculosis usually attacks the lungs but can also affect other parts of the body...
, MRSA, Listeria, Salmonella
Salmonella
Salmonella is a genus of rod-shaped, Gram-negative, non-spore-forming, predominantly motile enterobacteria with diameters around 0.7 to 1.5 µm, lengths from 2 to 5 µm, and flagella which grade in all directions . They are chemoorganotrophs, obtaining their energy from oxidation and reduction...
, Pseudomonas aeruginosa
Pseudomonas aeruginosa
Pseudomonas aeruginosa is a common bacterium that can cause disease in animals, including humans. It is found in soil, water, skin flora, and most man-made environments throughout the world. It thrives not only in normal atmospheres, but also in hypoxic atmospheres, and has, thus, colonized many...
, Hepatitis B, Norovirus.