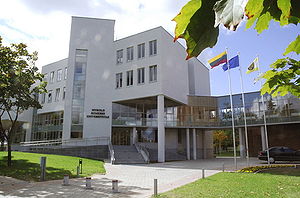 Mykolas Romeris University is the second largest university in Lithuania. Over 21,000 students were enrolled during the 2009-2010 academic year.

The university consists of 6 faculties and about 40 departments. It offers more than 70 programmes at the Bachelor's, Master's, and Doctoral levels. Studies are carried out in compliance to the major principles of Bologna process. The major fields of study are Law, Public Administration, Economics, Finance Management, Psychology, Social Work, Social Policy, Sociology, and Education.

On September 16, 2003, the University joined the ranks of signatories of Magna Charta Universitatum together with other progressive universities.

The Legal Aid Center and Crime Victim Care Association of Lithuania, which provides support to crime victims, have earned the trust of the public and gained the attention of politicians during the duration of their functioning - more than a decade.

University staff and PhD students counsel Lithuanian citizens on legal and social issues at the Vilnius Legal Aid Center and at outreach centers throughout the country. Each month the team reaches out to the remote districts of the country. The beneficiaries of this program now total 40,000. The university also sponsors a Crime Victim Care Association.

Mykolas Romeris University is the founder of the following institutes: