Encyclopedia
The Museum of Tolerance a multimedia
Multimedia
Multimedia is media and content that uses a combination of different content forms. The term can be used as a noun or as an adjective describing a medium as having multiple content forms. The term is used in contrast to media which use only rudimentary computer display such as text-only, or...
museum
Museum
A museum is an institution that cares for a collection of artifacts and other objects of scientific, artistic, cultural, or historical importance and makes them available for public viewing through exhibits that may be permanent or temporary. Most large museums are located in major cities...
in Los Angeles, California
Los Angeles, California
Los Angeles , with a population at the 2010 United States Census of 3,792,621, is the most populous city in California, USA and the second most populous in the United States, after New York City. It has an area of , and is located in Southern California...
, USA, with an associated museum and professional development multi-media training facility in New York City
New York City
New York is the most populous city in the United States and the center of the New York Metropolitan Area, one of the most populous metropolitan areas in the world. New York exerts a significant impact upon global commerce, finance, media, art, fashion, research, technology, education, and...
, is designed to examine racism
Racism
Racism is the belief that inherent different traits in human racial groups justify discrimination. In the modern English language, the term "racism" is used predominantly as a pejorative epithet. It is applied especially to the practice or advocacy of racial discrimination of a pernicious nature...
and prejudice
Prejudice
Prejudice is making a judgment or assumption about someone or something before having enough knowledge to be able to do so with guaranteed accuracy, or "judging a book by its cover"...
in the United States
United States
The United States of America is a federal constitutional republic comprising fifty states and a federal district...
and the world with a strong focus on the history of the Holocaust. The MOT has expanded to Jerusalem, where a "Center for Human Dignity
Center for Human Dignity
The Center for Human Dignity is the Simon Wiesenthal Center-planned Museum of Tolerance over Mamilla Cemetery at the center of West Jerusalem between Zion Square and the neighbourhood of Mamilla. The construction of the approximately 200-million dollar Museum began in June 2005 and was expected to...
" is currently under construction. It is sponsored by the Simon Wiesenthal Center
Simon Wiesenthal Center
The Simon Wiesenthal Center , with headquarters in Los Angeles, California, was established in 1977 and named for Simon Wiesenthal, the Nazi hunter. According to its mission statement, it is "an international Jewish human rights organization dedicated to repairing the world one step at a time...
.

The original museum in Los Angeles, California
Los Angeles, California
Los Angeles , with a population at the 2010 United States Census of 3,792,621, is the most populous city in California, USA and the second most populous in the United States, after New York City. It has an area of , and is located in Southern California...
opened in 1993. The museum receives 350,000 visitors annually, about a third of which are school-age children. The museum's most talked-about exhibit is "The Holocaust Section", where visitors are divided into groups to take their own place in some of the events of World War II
World War II
World War II, or the Second World War , was a global conflict lasting from 1939 to 1945, involving most of the world's nations—including all of the great powers—eventually forming two opposing military alliances: the Allies and the Axis...
. These experiences are then discussed afterwards. The museum also features testimonies of Holocaust survivors, often from live volunteers who tell their stories and answer questions. People also get cards with pictures of Jewish children on them and at the end of the museum trip, it is revealed whether the child on the card survived or died in the Holocaust.

In addition, the museum features a "Tolerancenter" that discusses issues of prejudice in everyday life, a Multimedia Learning Center, Finding Our Families-Finding Ourselves, a collection of archives and documents, various temporary exhibits such as Los Angeles visual artist Bill Cormalis Jr's "A" Game In The B Leagues," which documents through paintings, the Civil Rights movement during the segregation of colored people in Major League Baseball, and an Arts and Lectures Program.

A classroom visit to the museum is featured in the 2007 movie Freedom Writers
Freedom Writers
Freedom Writers is a 2007 American drama film starring Academy Award winner Hilary Swank, Scott Glenn, Imelda Staunton and Patrick Dempsey. It is based on the book The Freedom Writers Diary by teacher Erin Gruwell who wrote the story based on Woodrow Wilson Classical High School in Long Beach,...
, based on the real-life story of high school teacher Erin Gruwell
Erin Gruwell
Erin Gruwell is an American teacher known for her unorthodox teaching method, which led to the publication of The Freedom Writers Diary: How a Teacher and 150 Teens Used Writing to Change Themselves and the World Around Them...
and her students. The museum was parodied in an episode of South Park
South Park
South Park is an American animated television series created by Trey Parker and Matt Stone for the Comedy Central television network. Intended for mature audiences, the show has become famous for its crude language, surreal, satirical, and dark humor that lampoons a wide range of topics...
called "The Death Camp of Tolerance
The Death Camp of Tolerance
"The Death Camp of Tolerance" is episode 93 of the Comedy Central series South Park. It was originally broadcast on November 20, 2002.-External links:* Full episode at South Park Studios* Episode guide at South Park Studios...
". 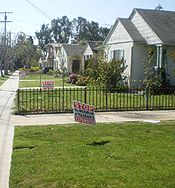 One of the primary criticisms of the Museum of Tolerance is that its exhibits use excessive multimedia technology to appeal to and manipulate the emotions of children. The museum uses fast-paced skits, dioramas, films, and interactive computer-controlled exhibits in an effort to make an emotional impact on visitors. For most of the tour, actual historical artifacts are absent, and a select few are shown at the end. Some critics have suggested that this is "hypocritical," likening the use of emotionally-charged media to the propaganda used by the Nazi Party during the Holocaust.

In 2005, the Simon Wiesenthal Center's (SWC) Rabbi Marvin Hier
Marvin Hier
Rabbi Marvin Hier is the dean and founder of the Simon Wiesenthal Center, its Museum of Tolerance and of Moriah, the Center's film division....
announced plans to construct a "Museum of Tolerance and Human Dignity" in Jerusalem by destroying the historic Mamilla Cemetery
Mamilla Cemetery
Mamilla Cemetery is an historic Muslim cemetery located just to the west of the walls of the Old City of Jerusalem. The cemetery, at the center of which lies the Mamilla Pool, contains the remains of figures from the early Islamic period, several Sufi shrines and Mamluk-era tombs...
, a Muslim burial ground that goes back hundreds of years . The project aims to promote tolerance amongst Jewish populations within Israel, including Ashkenazim, Mizrahim, Ethiopians, Russians, and others. Frank Gehry
Frank Gehry
Frank Owen Gehry, is a Canadian American Pritzker Prize-winning architect based in Los Angeles, California.His buildings, including his private residence, have become tourist attractions...
designed the new museum complex to resemble a fruit bowl; he withdrew from the project in January 2010.


Criticism of destruction of cemetery

The MOT-Jerusalem has been criticized for being built on former Muslim cemetery grounds. The Mamilla Cemetery
Mamilla Cemetery
Mamilla Cemetery is an historic Muslim cemetery located just to the west of the walls of the Old City of Jerusalem. The cemetery, at the center of which lies the Mamilla Pool, contains the remains of figures from the early Islamic period, several Sufi shrines and Mamluk-era tombs...
contained the graves of many important Islamic saints and scholars, as well as several Mamluk tombs. The SWC asserts that the cemetery was long ago deconsecrated by Islamic leaders, and that secular Arab leaders prior to the creation of the State of Israel had planned various development projects there. This argument has in turn been challenged in the Israeli legal system, but the argument was rejected by Israel's Supreme Court
Supreme Court of Israel
The Supreme Court is at the head of the court system and highest judicial instance in Israel. The Supreme Court sits in Jerusalem.The area of its jurisdiction is all of Israel and the Israeli-occupied territories. A ruling of the Supreme Court is binding upon every court, other than the Supreme...
.

While the location of the MOT-Jerusalem has elicited the most media attention, architectural, archaeological and social critiques have accompanied the project throughout its course. Haaretz architecture critic Esther Zandberg has critiqued the location of an ostentatious Gehry design at the heart of Jerusalem, arguing that Jerusalem is not Bilbao
Guggenheim Museum Bilbao
The Guggenheim Museum Bilbao is a museum of modern and contemporary art, designed by Canadian-American architect Frank Gehry, built by Ferrovial, and located in Bilbao, Basque Country, Spain. It is built alongside the Nervion River, which runs through the city of Bilbao to the Atlantic Coast. The...
. Others have expressed concern over the focus of the museum on tolerance amongst Jews, rather than tolerance between Jews and Arabs. The plan has been severely criticized by both Israelis and Palestinians. Construction had been stayed several times by the courts before allowing it to continue.

In autumn, 2008, the Israeli Supreme Court cleared "the way for L.A.'s Simon Wiesenthal Center to build a Holy Land
Holy Land
The Holy Land is a term which in Judaism refers to the Kingdom of Israel as defined in the Tanakh. For Jews, the Land's identifiction of being Holy is defined in Judaism by its differentiation from other lands by virtue of the practice of Judaism often possible only in the Land of Israel...
counterpart to its Museum of Tolerance on Pico Boulevard
Pico Boulevard
Pico Boulevard is a major Los Angeles street that runs from the Pacific Ocean at Appian Way in Santa Monica to Central Avenue in Downtown Los Angeles, California, USA...
."

On November 19, 2008 a group of US Jewish and Muslim leaders sent a letter to the Wiesenthal Center to halt the construction of the Museum of Tolerance on the historic Muslim cemetery in Jerusalem.