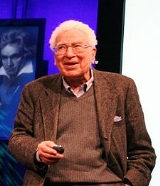 Overview
Murray Gell-Mann is an American
United States
The United States of America is a federal constitutional republic comprising fifty states and a federal district...
physicist
Physicist
A physicist is a scientist who studies or practices physics. Physicists study a wide range of physical phenomena in many branches of physics spanning all length scales: from sub-atomic particles of which all ordinary matter is made to the behavior of the material Universe as a whole...
and linguist who received the 1969 Nobel Prize in physics
Nobel Prize in Physics
The Nobel Prize in Physics is awarded once a year by the Royal Swedish Academy of Sciences. It is one of the five Nobel Prizes established by the will of Alfred Nobel in 1895 and awarded since 1901; the others are the Nobel Prize in Chemistry, Nobel Prize in Literature, Nobel Peace Prize, and...
for his work on the theory of elementary particle
Particle physics
Particle physics is a branch of physics that studies the existence and interactions of particles that are the constituents of what is usually referred to as matter or radiation. In current understanding, particles are excitations of quantum fields and interact following their dynamics...
s. He is the Robert Andrews Millikan Professor of Theoretical Physics Emeritus at Caltech, a Distinguished Fellow and co-founder of the Santa Fe Institute
Santa Fe Institute
The Santa Fe Institute is an independent, nonprofit theoretical research institute located in Santa Fe and dedicated to the multidisciplinary study of the fundamental principles of complex adaptive systems, including physical, computational, biological, and social systems.The Institute houses a...
, Professor in the Physics and Astronomy Department of the University of New Mexico, and the Presidential Professor of Physics and Medicine at the University of Southern California
University of Southern California
The University of Southern California is a private, not-for-profit, nonsectarian, research university located in Los Angeles, California, United States. USC was founded in 1880, making it California's oldest private research university...
.

He formulated the quark model
Quark model
In physics, the quark model is a classification scheme for hadrons in terms of their valence quarks—the quarks and antiquarks which give rise to the quantum numbers of the hadrons....
of hadronic resonances, and identified the SU(3) flavor symmetry of the light quarks, extending isospin
Isospin
In physics, and specifically, particle physics, isospin is a quantum number related to the strong interaction. This term was derived from isotopic spin, but the term is confusing as two isotopes of a nucleus have different numbers of nucleons; in contrast, rotations of isospin maintain the number...
to include strangeness
Strangeness
In particle physics, strangeness S is a property of particles, expressed as a quantum number, for describing decay of particles in strong and electromagnetic reactions, which occur in a short period of time...
, which he also discovered.